How Judge Amy Coney Barrett has hastened the collapse of the fake feminazi paradigm.

Pelosi, Barrett and the False Face of Strength 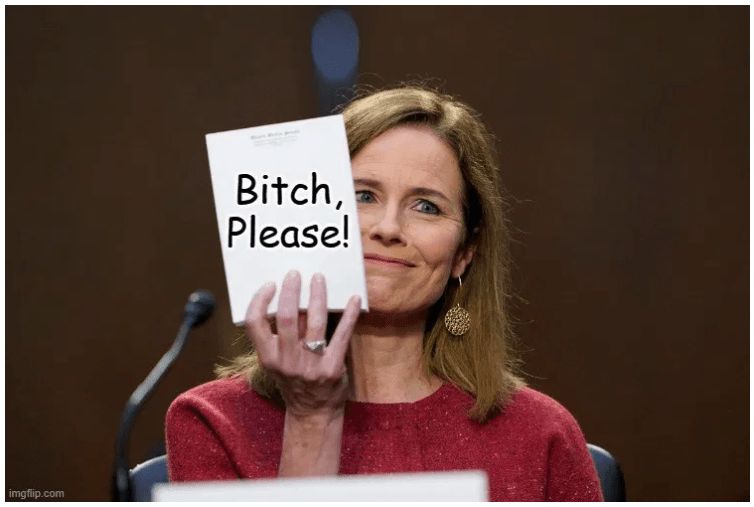 But to make my point I first have to deal with Speaker of the House Nasty Nancy Pelosi’s appearance on CNN.

While Barrett was dealing with the dementia of the Senate Judiciary Committee, Pelosi finally came face to face with strength in the unlikely form of Wolf Blitzer and lost complete control of his Situation Room.

If you watch this entire sequence carefully you’ll note that Blitzer simply held to his point that she wouldn’t answer, why not pass some stimulus bill now and get something done, even if it’s perfect?

Madame Speaker, you have a chance to alleviate suffering and you’re playing politics.

We know what the answer is, because it would allow President Trump a victory on the eve of an election. We know Pelosi is a pure political animal (and her behavior here truly sinks to that level).

But, that’s not what’s interesting, here.

It is how transparent she is about not automatically being allowed to control the conversation to recite her talking points. She obviously feels entitled to the power of Wolf’s platform.

And she was not expecting this. When confronted with it she launches a personal attack which fails completely. In politics, the first rule is, “You never attack down.”

Pelosi knows this, that’s why she uses her position as a woman to frame her attacks up against Trump the way she does, playing the girl card whenever she can. But on this issue she can’t attack Trump because Trump said …

And that’s when it all collapsed. This is THE fight of Pelosi’s career, not the impeachment. It is this stimulus bill because she’s held the entire country hostage over it to win an election after displacing and ruining the lives of hundreds of millions of people.

She lost because she attacked down, at a TV talking head no less, not a political rival. You can see it on her face, as Speaker why should she have to justify herself to someone she considers ‘the help’ like Wolf Blitzer.

I mean, for pity’s sake, who is actually lower on the DC political totem pole than Wolf Blitzer?

And Pelosi ran up against him and shattered like brittle glass.

And when I say shattered I mean atomized, not just for her but for all the crazy, out-of-control feminists she represents. Her carefully crafted facade of the strong-minded, independent woman who could stand toe-to-toe with a man evaporated in between heartbeats.

Watch the video closely. You’ll know that moment when it happens.

The reason Blitzer took her down so easily is because she’s never seriously challenged. People like Pelosi can put up the false face of strength and baldly lie because they’re given all the advantages before they ever walk onto the battlefield.

Her reputation is a facade, carefully constructed by the people who control her.

She has a job to do. She’s paid extremely well to do it. But she’s overplayed her hand multiple times against Trump and lost. And it seems CNN and the people who direct it decided it was time to cut bait and leave her twisting in the wind.

The mere fact that Blitzer was told during this interview to go after her is your sign that something has fundamentally changed.

The rats are leaving the sinking ship which has steered the good ship Corn Pop into the iceberg of the silent majority that have had more than enough of their inhumanity.

Pelosi is the false face of female power, a pathetic excuse for a vaudeville whore, drunk on a fatuous ideology equal parts envy and disdain that has women bullying men into submission so they can validate their own soulless choices.

Because in her twisted mind, without her and her awesome power of government, none of us would survive in the big bad world.

And it came out in full when she had her, “You didn’t build that” moment, saying that she’s the one who feeds her constituents, implying that without her they wouldn’t eat.

“… and we feed them,” she said multiple times. Really, Nancy? Without you we’d all just starve?

Juxtapose that with the other remarkable event this week. The moment when Supreme Court Nominee Amy Coney Barrett after suffering through idiotic question after question from beta male and hysterical female Senators about her stance on abortion held up a blank notepad showing the world how well-prepared she was for the situation.

She projected the kind of calm patience and competence that comes from inner strength. And she did it with only her knowledge of the law, her understanding her role as a jurist and the strength of purpose that comes from being a person of deep faith.

Let’s put it this way, like Mike Pence the week before in his debate with Kamala Harris, Mrs. Barrett reflected awfully well on the man who selected her for the job, Donald Trump.

In doing so she projected the exact opposite of what Pelosi did, respect for the hierarchy and the reason it exists — to do it’s best to serve the people who created it.

Pelosi has spent the last two years trying to upend that hierarchy, to dominate Trump through lies and manipulation of rules, holding the entire country hostage to her truly reprehensible lust for power.

Mrs. Barrett, onthe other hand, is supposed to be this dinosaur who will set the court back a hundred years replacing the tyrant and mid-wit Ruth Bader Ginsburg while hysterical women cosplayed outside the Capitol in Handmaid’s Tale garb.

But all she did was bring a quiet dignity back to what had become a circus in the fake world of social and television media. Wolf Blitzer did the same thing.

We’ve lost something vital in this election cycle, a sense of dignity and propriety thanks to a winner-take-all attitude that is an outgrowth of the insane power concentrated in the dystopic world of Washington D.C.

We’re not likely to get it back anytime soon.

But this week may have finally been a turning point after nearly eight months of literal insanity where people finally saw something that wasn’t a complete theater of the absurd, allowing jackals and flying monkeys to set the tone for our future.

While I have misgivings about Mrs. Barrett’s potential as the kind of Supreme Court Justice I’d prefer to see on the court there can be no doubt that she knows her way around a job interview.

And it was refreshing to see her hold her ground and not take any bait from the ridiculous lying simps and harpies grilling her.

Pelosi, on the other hand, has been in her job for so long she can’t even conceive of not being entitled to imposing her will on everyone no matter the costs. And she’s so caught up in her own personal psychodrama she forgot she still has to interview for her job every two years.

Politics is supposed to be the art of the possible, that’s usually a convenient excuse justifying surrender. Feminists thrive on male surrender.

But Feminism collapses in the face of male competency. Real female power comes from giving men a reason to fight for them, a purpose for their struggle and sacrifice. No self-respecting man would lift a finger for a witch like Pelosi.

Every man alive would walk through hell for a woman like Mrs. Barrett.

That’s what changed this week. And what’s truly sad is that we should be thankful for it.