Remember, Journalist Serena Shim was assassinated for telling the “terrorist truth” about the Western-directed Syrian War. 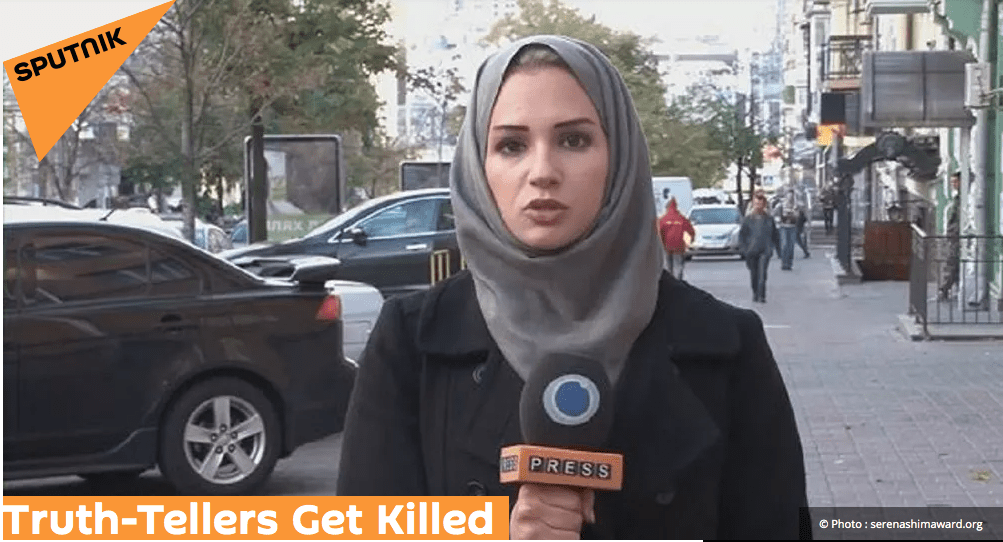 This week is the sixth anniversary of Serena Shim’s death, a brave journalist who exposed the real nature of the war in Syria as being a covert aggression by foreign powers for regime change.

That nefarious foreign-sponsored assault on Syria involved multiple war crimes committed by governments who claim to be democratic and law-abiding. It involved the complicity of Western media who have bent over backwards to distort the truth in the service of their governments.

While Western media were fabricating the nearly decade-long conflict in Syria as a civil war between a supposedly evil regime and pro-democracy rebels, Serena Shim’s investigative reporting helped shred that charade. It was thanks to her intrepid work that the world could learn of what was really going in Syria and to debunk the lies being spewed by Western governments and their media foghorns.

The young Lebanese-American reporter was working for Press TV in northern Syria. Her investigations found that the so-called “rebels” touted by Western media and governments were in reality mercenaries belonging to various internationally proscribed terror groups who were being weaponized and directed by NATO powers to destabilize Syria.

Shim was able to report how terror brigades were working hand-in-glove with Turkish military intelligence (MIT) and were being infiltrated into Syria. Her revelations helped expose the criminal conspiracy that the United States, Britain and France, Turkey and other powers were perpetrating in order to overthrow the Syrian government. That conspiracy relied on these foreign powers colluding with terrorist proxies despite their mendacious propaganda of bombing Syria to allegedly “fight terrorism”. It was largely due to Russia’s military intervention in September 2015 onwards to aid its ally that resulted in the defeat of the covert plot to destroy Syria.

© AP PHOTO / SANA
Syrian government troops hug each other in celebration inside the Kuweires air base, east of Aleppo, Syria

Two days before her death on October 19, 2014, Shim broadcast her last report in which she expressed fears to Press TV viewers that her life was in danger from Turkish military intelligence who had begun accusing her of being a “spy” even though she was an accredited journalist working for a respected international news outlet.

Her family believes she was assassinated. The car she was traveling in on the Turkish side of the Syrian border was hit by a concrete-mixer truck. Her female companion and driver later testified that the truck hit the car from behind, running it off the highway, which contradicted Turkish claims that the two vehicles were in head-on collision.

Shim was inexplicably separated from her driver who was taken to a different hospital in Turkey. While her companion survived the crash, Shim was later pronounced dead, apparently from “heart failure”. At her funeral in Lebanon, the journalist’s mother noted that she did not have any injury marks on her body, as one would expect from a serious car crash. (Credit is due to Fox News for reporting that.)

It is telling that despite her family’s appeals, given her US citizenship, the American State Department has never called for an investigation into the death.

However, it seems certain that Serena Shim’s family’s suspicions of murder are well-founded.

For the 29-year-old Michigan-born journalist had done something incredibly dangerous. She told the truth about what Turkey and other foreign powers were actually doing in Syria. They were weaponizing terrorists to wage a covert war of aggression against a sovereign nation. A war that has killed up to half a million people and made millions homeless.

Serena Shim is proof of that maxim. If they are not killed, then they can end up being thrown into a dungeon like Julian Assange to face a hellish life behind bars. Assange too committed a capital “crime” of exposing the war crimes and state terrorism of Western powers. That’s why the American and British regimes want to put him in jail for 175 years over fabricated spying charges.

Serena Shim and Julian Assange should be honored as heroes. Instead they paid an abominable price with their lives and freedom.

It is vital to remember heroes like Serena Shim and to fight for justice for Julian Assange. They have shown us the lies and deceptions of so-called democratic governments and their cowardly media foghorns.

Thanks to their truth-telling we are empowered to fight the real tyranny that passes for “law-abiding governments”.

The views and opinions expressed in the article do not necessarily reflect those of Sputnik.