Lying And Cheating Are In Joe Biden’s Blood (Videos)

The Man Who Could Become America’s Next President Has A Harvey Weinstein Level History Of Debauchery, Totally Covered Up By The MSM And Big Tech

– Lying And Cheating Are In Joe Biden’s Blood

By Don Boys, Ph.D. for All News Pipeline

Adulterers have served as U.S. President almost since our beginning. Our present leader is an admitted adulterer; however, he’s all we have. And he has kept his promises and has had unusual success in domestic and foreign affairs, the economy, COVID-19, and there is no reason to think he would stop keeping his word. As to any sexual affairs in the present, no one knows.

Nothing would shock me.

However, I am weary of reading about Joe Biden’s decency and his faith. If Joe—longtime swamp critter—is so decent and true to his faith, why does he stand opposite to what his Roman Catholic Church teaches? He has supported the slaughter of innocent unborn babies all his political life and now even supports killing the kids up to the time of birth! The church also stands against fornication and adultery, but that hasn’t changed Biden’s personal morality.

Joe is a major supporter of sodomy when his church stands against it. He stands for same-sex marriage, which is contrary to biblical teaching, standards of moral behavior, and common sense. He equates sodomy with love and romance when it has always been known as a crime against nature. It is an aberration and abomination and is appalling, yet Joe applauds it.

God warned all of us about calling good evil and evil good.

Moreover, Biden even supports children deciding whether they are male or female, although that can be decided by each doubtful person with a quick downward glance.

Joe stands with the male athletes who pretend to be female while they humiliate all females in various competitions. He asserted, “Let’s be clear: Transgender equality is the civil rights issue of our time…There is no room for compromise when it comes to basic human rights.” Recently he came out for transgenderism for children, even to permitting an 8-year-old to make the decision!

So, how can Biden be a Catholic when he stands against what the church stands for? What does a Catholic have to do to be kicked out of the church? But then Hitler and Mussolini died in the arms of that church. I hope Americans have higher standards for their President than church officials have for members. (To their credit, some Catholic leaders have declared that Biden should be refused communion, but he should be excommunicated since he does not support his church’s teaching.)

Joe is known for lying and cheating from his youth. He is known for touching and hugging girls and women. A decent person cannot watch some incriminating videos taken at White House events without cringing in disgust.

A Secret Service Agent declared, “We had to cancel the VP Christmas get together at the Vice President’s house because Biden would grope all of our wives and girlfriend’s a****.” The agents said Biden always swam in the nude when his wife was absent and female agents resented his nudity. “He would mess with every single woman or teen. It was horrible,” the agent said.

In 2009, Biden “cupped” the breast of a Secret Service Agent’s girlfriend, and other agents had to hold back the agent from assaulting him. While I believe in turning the other cheek, I would not do so under those circumstances. I would have decked the Vice President. Yes, Virginia, there is a time for violence even for an active Christian. While I haven’t been violent since high school, I could get there quickly if anyone touches my wife, daughters, or grandchildren inappropriately.

Additionally, the agent claims that Biden would walk around the VP residence naked at night. “I mean, Stark naked… Weinstein level stuff,” he added. No Christian or decent pagan does things like that in the presence of other people.

And he may become your President! 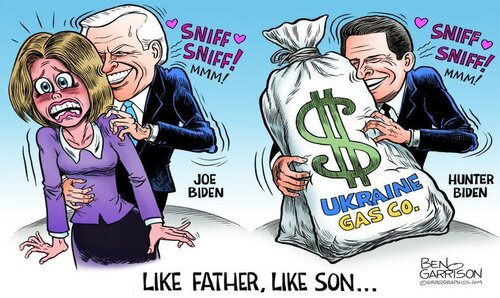 The mainstream media refuses to deal with such base, brazen, and bizarre activities. At least seven women have charged him with unwanted touching, kissing, smelling their hair, etc. Nor has the accusation of sexual assault by Tara Reade been addressed. It was not mentioned in the debates and town halls.

Shocking, but it is even worse.

Joe often tells a romantic tale of meeting Jill on a blind date following the death of his wife and child in a car accident. But, it was just another one of Joe’s lies. You can’t trust Joe Biden when you ask him about today’s date. Lying seems to be in his blood, as does cheating.

Bill Stevenson and his wife Jill gave themselves to work for Joe’s first run for the U.S. Senate, plus Bill gave Joe “$10,900 in cash.” Jill especially gave herself to Joe and his campaign. She got sexually involved with Joe, according to Bill. Joe got elected, Bill had his home wrecked, and Jill married a U.S. Senator. Bill claims, “‘Biden Stole my Wife.’ Joe Biden and his wife Jill ‘had affair when she was still married’” was the headline of The Sun.

So, the home wrecker wants to fix America. What he wants is to turn America into a Socialist state to satisfy Bernie, AOC, and that Indian woman from the Peoples’ Republic of Massachusetts.

Jill admitted in her 2019 autobiography Where The Light Enters that Joe really pushed her for a date, and after repeated refusals, she accepted. That date went further than they planned, and they spent the next two nights together as well.

So, Jill admitted to adultery on their first date. It didn’t happen that way since it started with a work-place affair during Joe’s first senatorial race. 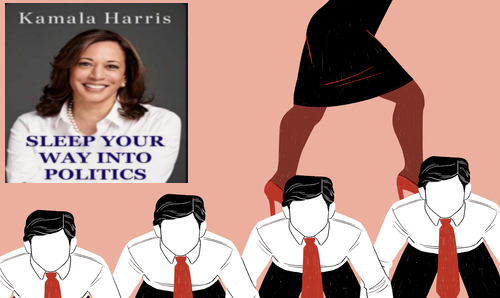 Everyone in California except a few disoriented homeless street people know 29-year-old Harris slept her way to the top. Her former lover, 60-year-old Willie Brown (the very definition of slime ball), said, “Yes, I may have influenced her career by appointing her to two state commissions when I was [California] Assembly speaker. And I certainly helped with her first race for district attorney in San Francisco.”

However, the married Willie Brown sees nothing wrong in their fornication or in giving her positions that were not based on her ability but her willingness to fornicate. Harris was Brown’s escort at many social and political functions and even had her at his 60th birthday party where his wife was present.

Brown’s much-mistreated wife declared, “Listen, she may have him at the moment, but come inauguration day, and he’s up there on the platform being sworn in, I’ll be the b***h holding the Bible.”

One commission that Brown appointed her to paid her over $97,000 for a six-month stint, then another board paid $72,000 and met once a month. The work required little knowledge, skill, or commitment but gave her something to do when she wasn’t taking care of Willie, plus gave her a generous income. Harris is a shameless, brazen hypocrite.

More than that, she is an ingrate. After getting to the top with the help of Brown and no longer under him, she now said, “His career is over; I will be alive and kicking for the next 40 years. I do not owe him a thing.” Well, no, I suppose she has already paid him; they both got what they wanted.

Brown admits to helping other Democrats get elected or appointed to public office, but “The difference is that Harris is the only one who, after I helped her, sent word that I would be indicted if I ‘so much as jaywalked’ while she was D.A.,” Brown wrote. “That’s politics for ya.”

The Biden-Harris team declared, “There is no vaccine for racism.” I followed that with a column declaring neither is there a vaccine for lying and hypocrisy!

As to where Harris would take America, she is Hillary Clinton in blackface, according to a black pastor. She is worse than Hillary since she can always play the race card.

Will any reporter ask, “Mrs. Harris, how many different men have you slept with to gain personal or political advantage?” That question would be followed, if the intrepid reporter was still alive, by “Mr. Biden did you break up the home of Bill Stevenson because of an affair with his wife Jill, and how much money has accrued to you through the machinations of your son Hunter and his work with Ukrainians, Russians, and Chinese?”

It seems America’s next President may be Dead Man Walking Biden and/or I Served Under Willie Brown Harris.

Adultery may not be a requirement to run for the Presidency, but it seems not to hurt, especially if accompanied with a generous dose of hypocrisy.

(Dr. Don Boys is a former member of the Indiana House of Representatives who ran a large Christian school in Indianapolis and wrote columns for USA Today for 8 years. Boys authored 18 books, the most recent being Muslim Invasion: The Fuse is Burning! The eBook is available here with the printed edition (and other titles) at www.cstnews.com. Follow him on Facebook at Don Boys, Ph.D.; and visit his blog. Send a request to DBoysphd@aol.com for a free subscription to his articles, and click here to support his work with a donation.)

E
This entry was posted in Uncategorized. Bookmark the permalink.