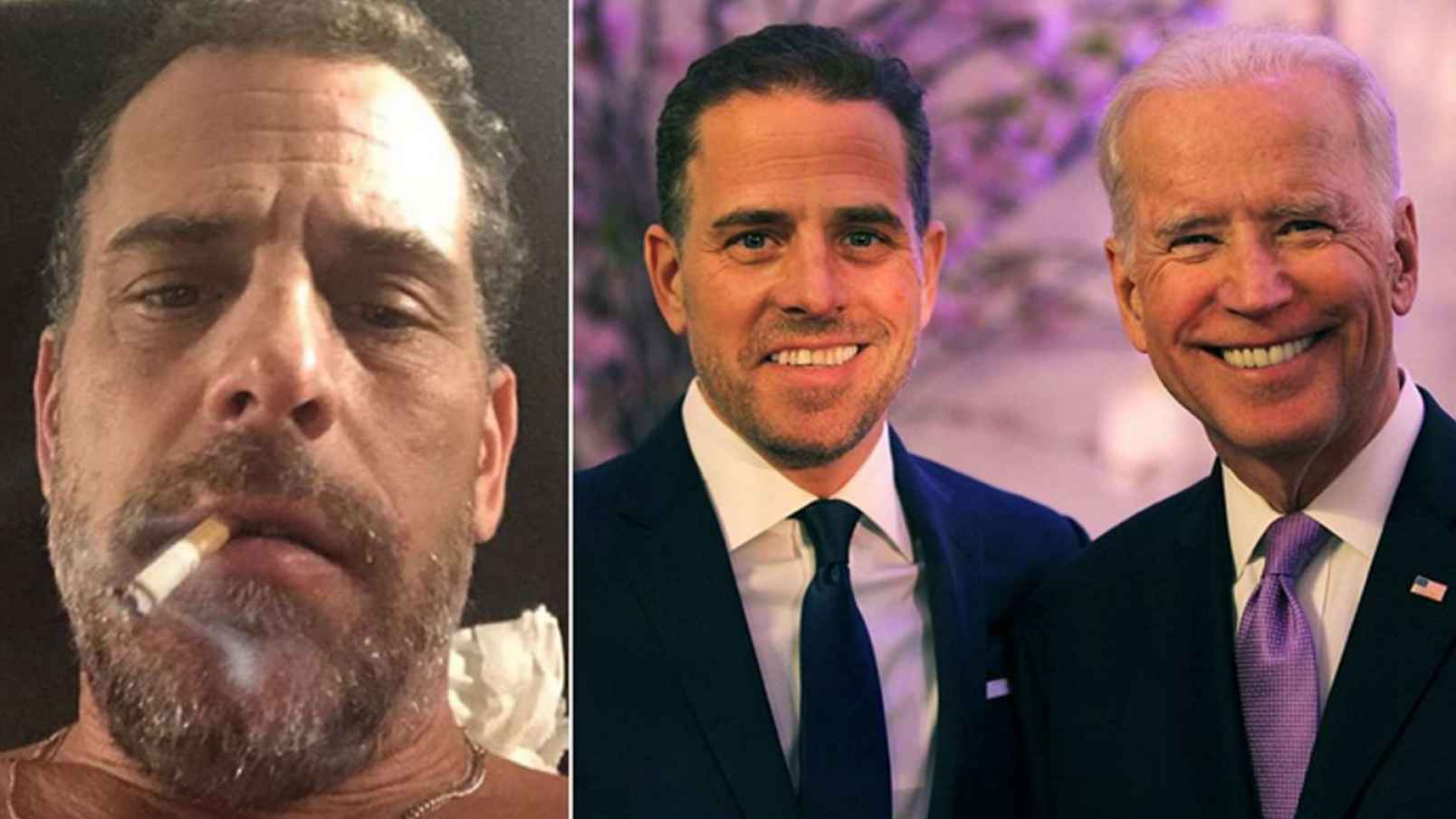 Daniel Greenfield, a Shillman Journalism Fellow at the Freedom Center, is an investigative journalist and writer focusing on the radical Left and Islamic terrorism.

The Biden family is notorious for being the crookedest clan not only in Delaware, but in D.C.

Delaware is a pretty small place, but D.C. is even smaller, yet the scope for corruption, unethical behavior, conflicts of interest, and even brazen thievery are far greater in Washington D.C.

And yet the Biden family stood out even there. To be born a Biden in the era after Joe switched his party affiliation, plagiarized his speeches, and inappropriately touched every woman or girl he could get his hands on in the state and the nation, was to be bred into dirty money.

Joe Biden was now asked in Wisconsin if Hunter had “profited off the Biden name”.

“None whatsoever,” the godfather of Delaware retorted. And the entire state laughed.

It doesn’t matter if you’re a Democrat or a Republican, in Delaware, everyone knows that the Biden name means money in the bank. Literally. Just ask MBNA, Hunter’s former employer, whose executives poured $200,000 into Joe’s coffers, and one of whom bought his house.

“Don’t worry about investors,” James Biden, Joe’s brother, famous for scoring a billion dollar contract to build houses in Iraq, told executives at Paradigm Global Advisors.  “We’ve got people all around the world who want to invest in Joe Biden.”

James had bought Paradigm together with Hunter Biden.

Biden can try to deny the obvious, but he isn’t even trying to deny that the emails and photos are real, or that it was his son’s laptop. Instead, he spouted a word salad of gibberish, stating, “the vast of the intelligence people have come out and said there’s no basis at all.”

Why does Biden need to call on “the vast of the intelligence people” who carefully avoided making a firm statement, to deny something he is better able to deny on his own?

Because it’s really an admission.

The latest emails make it all too clear that Joe Biden got Viktor Shokin, the Ukranian prosecutor, fired because Burisma wanted him gone and that Hunter Biden’s purpose in making deals with a powerful Chinese energy company linked to the Communist regime was to produce income for “me and my family”. It’s no wonder that the latest reports link the FBI’s subpoena of the laptop, not to the media’s false claims of a Russian op, but to a money laundering investigation.

Investing in Joe Biden or, as one message allegedly has it, “the big guy”, meant depositing the money with James or Hunter. And then Hunter deposited a laptop with a small computer repair shop in Delaware five miles from his father’s home, and never picked it up. The rest is history.

And the history is happening now.

The Hunter Biden laptop unrolls two ragged threads. One is the descent of Joe Biden’s son into new depths of depravity and the other are the foreign investors who bought into Joe Biden Inc.

The alleged photos of Hunter Biden’s drug use and underage girls might be dismissed as a spoiled rich kid’s demons. But, looking at public photos and videos of Joe Biden touching, caressing, and sniffing women and young girls, it’s hard not to see the influence. What did a teenage Hunter grow up seeing his father do? How did that shape him into the man he is?

And why was Hunter able to get away with it for so long?

“She told my therapist that I was sexually inappropriate with [name of 14-year-old girl redacted] when she says that I facetime naked with her and the reason I can’t have her out to see me is because I’ll walk around naked smoking crack talking [redacted] girls on face time,” Hunter appeared to message his father.

What was done about this? The odds are good that the answer is nothing.

The Hunter Biden laptop was turned over to the FBI in December of 2019. And the FBI appears to have done little with it. Giuliani submitted material allegedly showing criminal sexual behavior to the Delaware police who passed it off to the Delaware Department of Justice.

A spokesman for Delaware Attorney General Kathy Jennings said it was sent to the FBI.

Jennings is not only a Democrat, but a friend of the Biden family who had worked under Beau Biden and has been vigorously campaigning for Joe Biden.

“I’ve known Joe, Jill, and the Biden family for most of my life. Joe is one of the kindest and most genuine people I’ve ever known,” Jennings had posted on her Facebook page.

The Biden family may have been able to get away with a lot for the same reason as the Kennedy clan. They were big fish in a small pond being protected by the Democrat club. Like some Kennedy sons, Hunter may have spun out of control because he could get away with it.

That’s why Hunter Biden’s story is just an echo of Joe. Father and son appear to share a boundless greed for unearned wealth and women, and a complete lack of self-control with both.

And both men have spent their lives being protected from the consequences of their actions.

Laptop computers, like notebooks, are the mirrors of their owners. We use them and fill them with the things that matter to us. Going through a lost laptop or phone tells us a lot about the man or woman who spent years with it. Hunter Biden’s laptop is a mirror of the man. And the mirror shows a broken and corrupt human being filling its gigabytes with his demons.

What were Hunter Biden’s demons? The same as the ones that bedeviled Joe. Women and money. And as dirty and wrong as possible. That’s why Hunter allegedly didn’t just seek out money, he went after business opportunities in the most corrupt places in the world, like Kazakhstan and the People’s Republic of China, and he didn’t just chase women.

Instead, Rudy Giuliani has said that the laptop contained photos of underage girls.

But the bigger story isn’t Hunter’s depravity, it’s the business opportunities, the lobbying gigs and board seats offered to him by foreign companies looking to invest in Joe Biden.

In less than two weeks, Joe Biden’s stock will either boom or bust. And voters are entitled to know who, beyond the battalions of domestic special interests from Wall Street to Hollywood, from the gun control lobby to green businesses, pouring hundreds of millions into his campaign, is getting ready to collect interest on the foreign money that financed Hunter’s lifestyle.

Hunter Biden’s emails offer a window into a global operation, in the Ukraine, in Kazakhstan, and the People’s Republic of China, of investing in Joe Biden courtesy of his wastrel son.

Joe Biden has claimed that he has nothing to do with his son’s business affairs, but that’s a transparent lie that had been shot down even long before the laptop by media reporting. The media is frantically trying to bury information that backs up their own reporting from the primaries when the same media now trying to save Joe Biden originally wanted to bury him.

Why did so many Democrat officials, beginning with Barack Obama, try to keep Joe Biden from running in 2016 and then 2020? Joe Biden is a mediocre hack, but he’s a better candidate than Hillary Clinton, not to mention lefty luminaries like Al Gore or John Kerry. The problem was that the small state that spawned the Biden crime family was littered with their dirty laundry.

And now, in the final stretch before Election Day, the messy stained laundry is spilling out.

Like Humpty Dumpty, all the Democrat horses and men are trying to keep the mess contained. Twitter and Facebook are blatantly suppressing the story. The media has refused to cover the biggest scandal of the election while falsely claiming that Hunter Biden’s laptop is Russian disinformation despite clear denials by the intelligence community and the FBI.

Hunter Biden’s laptop isn’t just evidence of a degenerate past, but of the coming attractions.

The Biden crime family has built a global network of contacts. And when their father was a mere veep, they could only wet their beaks a little. If he wins, they’ll be able to drown in money.

Joe could throw around his weight in a backwater like Ukraine, but if he wins, Burisma will just be a tiny taste of what is to come. And the corruption in D.C. will make Delaware blush again.

Corruption is nothing new in D.C., but what the laptop reveals about Hunter Biden and his father is that, like the Clintons, they have no self-control. And the only thing more dangerous than cunning crooks at the head of a nation are inept kleptocrats who would leave evidence of their financial and sexual corruption on a laptop abandoned in a Delaware repair shop.

As new details trickle out, two things are obvious about the Biden crime family: they’re not only as crooked as a bent tree in a thunderstorm, they’re also hopelessly stupid at covering it up.

Even as the media denies everything for the Bidens, they have yet to deny the core facts.

Rep. Schiff may claim that Hunter Biden’s laptop is a Russian conspiracy, but neither Joe nor Hunter will say it. And what Schiff and the Democrats and their media can only say behind their backs is that they can’t believe how corrupt and incompetent the horse they bet on really is.

They haven’t seen anything yet.