WOW! Even Gov. Cuomo and Sen. Schumer are knee deep in BIDENgate 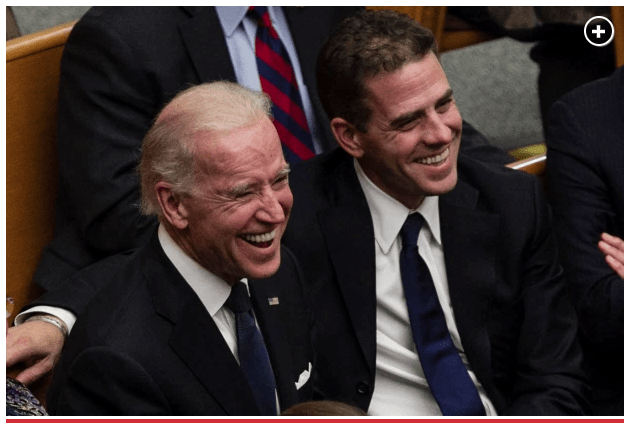 A May 15, 2017, memo naming potential contacts was sent by Joe Biden’s brother Jim to his nephew and three other men who all formed a limited liability company to partner with another firm on “global and/or domestic” projects involving “infrastructure, energy, financial services and other strategic sectors,” the documents show.

The other company was backed by a since-vanished Chinese energy tycoon and was to “be primarily responsible for arranging financing and execution” of the projects, according to the documents released by Tony Bobulinksi, who was CEO of the joint venture.

The memo, titled “Key domestic contacts for phase one target projects,” noted that Cuomo “is moving forward with major infrastructure projects such as the long-stalled Tappan Zee Bridge replacement and the much-needed redevelopment of LaGuardia Airport.”

“His administration has invested nearly $4 billion through the Regional Council and Upstate Revitalization initiatives to jumpstart the economy and support local priorities for development,” it added.

Cuomo was also referenced in an earlier e-mail that Bobulinski released in which another partner, James Gilliar of the consulting firm J2cR, discussed various strategies tied to their business plan.

The memo included no elaboration about Mayor de Blasio but said the then-president of the city’s Economic Development Corp., Maria Torres-Springer, “drives the physical transformation of New York City, completes major infrastructure upgrades, and encourages the creation of new residential and commercial districts.”

Sen. Chuck Schumer was described as having “made improving New York’s economy a top priority, bringing affordable air service to Upstate New York and working to successfully retain New York jobs at risk of leaving and attract many new firms to New York.”

Sen. Kirsten Gillibrand and New York’s then-commissioner of economic development, Howard Zemsky, were included, as were a number of other officials in Virginia, Minnesota, Florida and California, some of whose relationships to the partners were highlighted.

The memo described then-California Gov. Jerry Brown as a “long time friend from his first term as governor,” and his successor, Gavin Newsom, then the lieutenant governor, was identified as “Hunter’s friend.”

Sen. Rick Scott (R-Fla.) was described as a “personal friend of my friend Billy Rubin and close to my friend Ken Jenne, former Sheriff of Broward County, FL.”

Meanwhile, another e-mail sent by Jim Biden on May 15, 2017, and titled “short list of foreign friends for next phase?” contained a second list of names that included Mexican billionaire Carlos Slim, described as “arguably the richest man in the world” and “very friendly.”

“mentioning Slim now because he is big into racing and has a Formula I racing team and I know you are headed to the Grand Prix,” the memo added.

Others on that list included the presidents of Colombia and Argentina, and the “European Union in general.”

Both memos, which appear to have been copy-and-paste jobs, were sent as Microsoft Word documents with property values that show their author as Jim Biden’s wife, Sara Biden.

In response to the memos, Hunter Biden e-mailed the other partners the next day and expressed concern “that these lists of contacts and strengths are going to come back to haunt us.”

Hunter Biden suggested the lists “could easily serve . . . as the foundation for the divvying up of territory both geographically and commercially” by their partner in the joint venture.

“I may be paranoid but having worked in. [sic] The lobbying industry for years these attempts to create focus at the outset always and I mean always ended in disaster,” the e-mail says.

“I may be paranoid but having worked in. [sic] The lobbying industry for years these attempts to create focus at the outset always and I mean always ended in disaster,” the e-mail says.

“We should be thinking what we want to focus on and not who knows who as direction for focus in my opinion.”

The memos and e-mails are among more than 900 documents Bobulinski made public this week and outline plans for a company called Oneida Holdings to provide consulting services to a company called Hudson West IV.

Ye disappeared after being taken into custody by Chinese authorities in early 2018, and CEFC, which was China’s largest private energy company, went bankrupt this year, according to reports.

The joint venture, which was called SinoHawk Holdings, was never funded by CEFC nor did it complete any deals, The Wall Street Journal reported late Thursday, citing people familiar with the matter.

SinoHawk was apparently dissolved around October 2018, according to documents released by Bobulinski.

City Hall said there were no meetings between the Oneida partners and any officials.

“Take a metal detector out to Rockaway Beach this weekend. You’ll have a better chance of finding something of substance and you’ll get a nice walk in, too,” said de Blasio spokesman Mitch Schwartz.

A Schumer spokesman said neither the senator nor his aides had knowledge of the memo.

A Scott spokeswoman said, “Sen. Scott wasn’t contacted. He has called for a full investigation into Hunter Biden and the Biden family’s corruption.”

Joe Biden’s campaign, Jim and Sara Biden, and the others mentioned in the memos didn’t return requests for comment.