So now we’re racist because Biden didn’t win (and will lose after the recount)? Mass insanity has taken over the

So we’re racist because Biden didn’t get a landslide victory? That just shows how much the elite and the media hate Americans 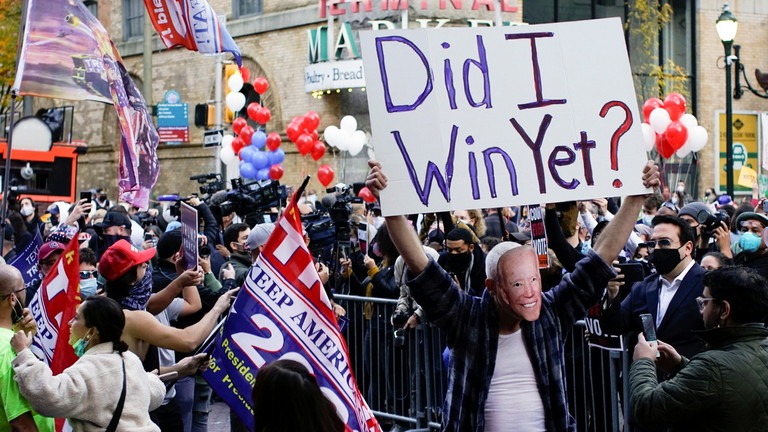 Trump supporter is wearing a Joe Biden mask at a rally as votes continue to be counted following the 2020 U.S. presidential election, in Philadelphia © Reuters / EDUARDO MUNOZ

MSNBC host Joy Reid wants Americans to be ashamed for failing to deliver on the media’s false promises that Joe Biden would win the election easily, giving President Donald Trump the beating she thinks he deserves.

After five years of watching Trump’s alleged sins play out in the mainstream media, “it felt like a repudiation was coming,” MSNBC host Joy Reid said late Wednesday. When that failed to happen on election night, with swing-state races too close to call and the outcome heading for a legal battle, Trump’s strong showing only confirmed to her that America has “a great amount of racism, anti-blackness, anti-wokeness.”

“We know what this country is, but still part of you, I think part of your heart says, you know what, maybe the country’s going to pay off all of this pain, the children that were stolen, with a repudiation,” Reid said. “And as the night wore on and I realized and it sunk in, OK, that’s not happening, we are still who we thought, unfortunately.”

Van Jones, the CNN host and commentator, said essentially the same thing on election night, saying the results didn’t provide the “moral victory” that Democrats wanted after seeing children being taken away from their mothers at the border and black children being called “the n-word” at school under Trump’s leadership. “They want a moral victory tonight,” he said. “We wanted to see a repudiation of this direction for the country. And the fact that it’s this close, I think, it hurts, it just hurts.”

Reid and Jones are both black, and in their view, anything short of a dominating one-party rule by their preferred party can only mean that America is too racist to vote correctly. It can’t be that the pollsters and the mainstream media were incompetent and/or dishonest when they vastly underestimated voter support for Trump, just as they did in 2016.

Their words are condemning, especially in the case of Reid’s: “we are still who we thought, unfortunately.” We, as in America, are still as racist and reprehensible as we thought because we don’t vote Democrat in sufficient proportion. We don’t hate Trump sufficiently for sticking his thumb in the eye of the ruling class and obnoxiously leading the nation as a populist. This is the same Bad Orange Man who won’t start fake wars, won’t kiss the ring of the CIA-Pentagon intelligence-military complex, won’t play by the rules of corrupt establishment politicians, won’t cower when the press calls him a racist and won’t support globalist trade and environmental deals.

Reid and Jones didn’t get the landslide they were looking for because voters were too busy again repudiating the ruling class and its media mouthpieces to repudiate Trump. They were too busy rejecting the people who brought us NAFTA, spied on us, transferred our manufacturing jobs to China, depressed our wages with illegal immigration, and squandered our blood and treasure in Iraq, Syria, Afghanistan, etc.

And they especially repudiated the liars who roll out the dreaded R words – ‘racism’ or ‘Russia’ – whenever someone needs to be silenced.

Contrary to leftist doctrine, most support for Trump isn’t about cultish followers who can’t be brought out of their trance long enough to come to grips with reality. A large portion of Trump supporters understand that he is a deeply flawed individual. He’s not righteous, his personality can be maddening, and he’s too easily baited into nonsensical arguments that distract from his agenda. But unlike the Joy Reids of the world – and their directors – he apparently loves America and its people.

It’s not only white people who notice the difference. CNN exit polls showed that support for Trump among Hispanic voters increased by 15-19 percentage points from 2016’s level in Florida, Georgia and Ohio. And Biden won just 80 percent of the black male vote, down from Hillary Clinton’s 82 percent in 2016 and Barack Obama’s 87-95 percent in 2008 and 2012. Trump also won 35 percent of the Muslim vote, compared with 15 percent support in that segment in 2016.

Those voters obviously didn’t believe the media mantra that Trump is a raging white supremacist. Or did they? The race hustlers have explanations for that, too, as it turns out. MSNBC contributor Eddie Glaude argued that black and Hispanic men are guilty of “sexism and patriarchy,” just like white men.

Young Turks commentator Aida Rodriguez took the psychoanalysis to another level. “Many people showed up to support Trump because let’s keep it real, a lot of people of color hate themselves,” she said. “They want to identify with upward mobility, and to them, that means white is right.”

But Glaude quickly brought the indictment discussion back to the real culprits: White people. “This is a story about how whiteness still animates the core of this country, along with selfishness, because we know who this man is. This race shouldn’t be this tight,” he said.

Reid made similar comments on election night, saying the results raised “real questions about what America is at the end of the day and whether what Trump is, is more like the American character than people ever, ever wanted to admit.”

These attacks on the character of voters were more of the same from ruling-class ‘elites’ who show only contempt for Americans and Americanism. Americans voted for Barack Obama, twice, and yet they’re reminded daily of how racist they are – ironically, by bigots and liars.

Reid was outed in April 2018 for anti-gay, anti-Muslim posts that she had made years earlier on her blog. She responded by alleging that someone had hacked her former blog and planted the offensive material years ago without her noticing. Her lawyer said the FBI was investigating, and MSNBC stood by her. Months later, she apologized for the posts without mentioning the hacking allegations or the FBI probe.

Is it any wonder that the feeling is mutual?