America or “Banana Republic”? Voter Fraud ALERT! The USA is under attack!

Since Election Day (November 3, 2020) we have been witnessing the most blatant instance of election fraud in the history of the USA!

As we watched the election results unfold and we were going back and forth between Fox News and CNN, they all started to panic as President Trump’s numbers were looking great.  By 10pm, President Trump had a 70% chance of winning the election, according to the initial statistical calculations.

Around midnight on November 3rd, as TGP reports:

After we went to bed, in the early morning hours of Wednesday November 4th, the “deep state” went to work in their attempt to steal the election. Around 3:30 am, “magically” out of nowhere, Joe Biden’s Wisconsin tally jumped up almost 200,000 votes without a single vote for President Donald Trump. You don’t have to be a math genius to realize that this is mathematically impossible! 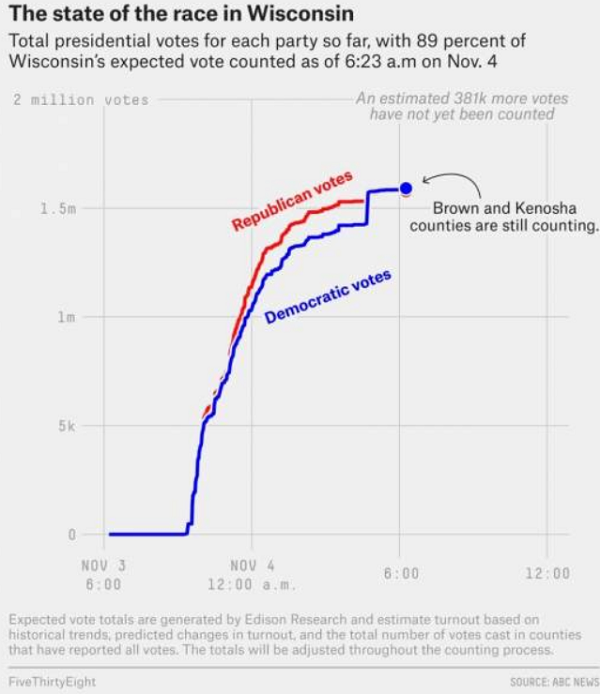 And in Michigan, the vote “inexplicably” jumped up over 130,000 votes for Biden in the middle of the night, without a single new vote for Trump. In this Facebook video, one of the Detroit ballot counters says that they were ready to go home when suddenly a white van, a Chrysler, and a Ferrari, pulled up with over 130,000 additional ballots. In her own words, “Every single ballot, literally 100% of 130,000 ballots, were all Biden ballots that hadn’t been delivered to the precinct before the cut off time.” 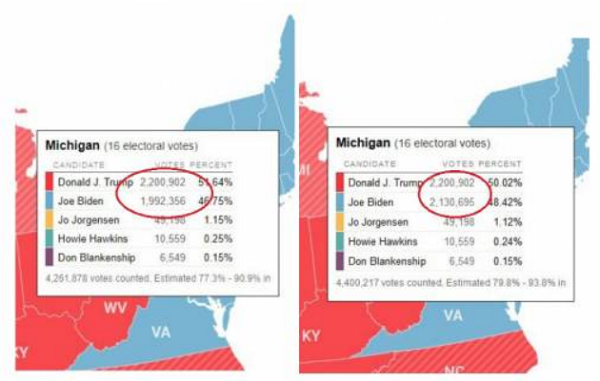 She indicated that GOP “poll watchers” were cursed at and intimidated by Democratic election officials, and they refused to let legal GOP counters/observers into the ballot room where the 130,000 “magical ballots” were counted. Apparently, the Michigan governor (Gretchen Whitmer) and DHHS claimed that the room was over capacity, and that is why they weren’t allowing the proper number of Republican watchers to view the ballot count, which is actually a violation of Michigan election law.

President Trump tweeted about these statistical impossibilities, and (surprise…surprise) Jack Dorsey and his Twitter Tyrants CENSORED the President’s tweet! 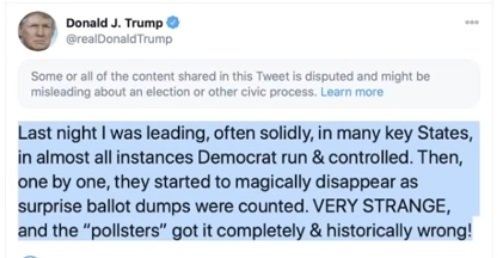 President Trump has been censored by Facebook and Twitter 65 times since May 2018, while Democratic presidential nominee Joe Biden has gone completely unchecked by the social media giants, according to a new study by the Media Research Center.

In a Senate hearing last week, Twitter CEO Jack Dorsey outright lied to Congress and claimed that Twitter has never censored President Trump, despite many examples that the company had.

Apparently, there were over 3,000 people who cast ballots that no longer live in Nevada. And several reports of dead people voting. Here is a video of a voter fraud expert in Clark County, Nevada (Las Vegas) detailing how dead people are being registered and allowed to vote. There’s tons of proof that these fake people had their ballots officially counted towards the election.