This is why FOX News is now trash—utter trash! 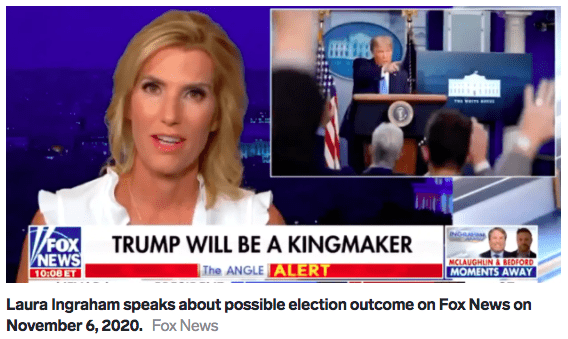 Fox News host Laura Ingraham advised President Trump on Friday to “accept defeat” with “grace and composure” in an extraordinary shift in messaging.

Following President-elect Joe Biden’s speech on Friday night, Ingraham went on Fox News to seemingly prepare her viewers for the likelihood that Trump might soon have to accept his election loss.

In a video of the segment, Ingraham said: “If and when it’s time to accept an unfavorable outcome in this election, and we hope it never comes, President Trump needs to do it with the same grace and composure that he demonstrated at that town hall with Savannah Guthrie.”

The Fox News pundit was referring to the president’s town hall event in October, which was hosted by NBC anchor Savannah Guthrie.

“Losing, especially when you believe the process wasn’t fair, it’s a gut punch,” Ingraham continued. “And I’m not conceding anything tonight, by the way, but losing, if that’s what happens, it’s awful. But President Trump’s legacy will only become more significant if he focuses on moving the country forward.”

Watch the moment below:

Ingraham’s comments to the president come as Trump refuses to concede the race to the White House, making unfounded claims of voter fraud and election theft.

Earlier Friday, Insider and Decision Desk HQ projected Biden to win the election after he picked up the state of Pennsylvania and its 20 electoral votes.

In the last few days, some Fox News’ election hosts and commentators have begun to challenge the president’s continual false statements, though not all.

The network’s decision to call Arizona for Biden earlier this week — the first major outlet to do so — enraged the Trump campaign and his followers.

Other Rupert Murdoch-owned media outlets, including the New York Post and Wall Street Journal, have also since shifted their messaging, which appears to be closely coordinated and includes an appeal to Trump to preserve his “legacy” by showing grace in defeat, the Guardian reported.

Ingraham has stood by President Trump throughout his four years in office, becoming one of the first pundits to endorse him early in his 2016 campaign.

She has since infiltrated Trump’s inner circle, speaking regularly at events like the Republican convention and at one point was even considered for the role of White House’s communications director.