‘This isn’t over!’ & ‘Stop the Steal!’ See how the MSM spins it below with their fake election news.

‘This isn’t over!’: Trump supporters refuse to accept defeat

From Atlanta and Tallahassee to Austin, Bismarck, Boise and Phoenix, crowds ranging in size from a few dozen to a few thousand decried the news of Joe Biden’s victory. 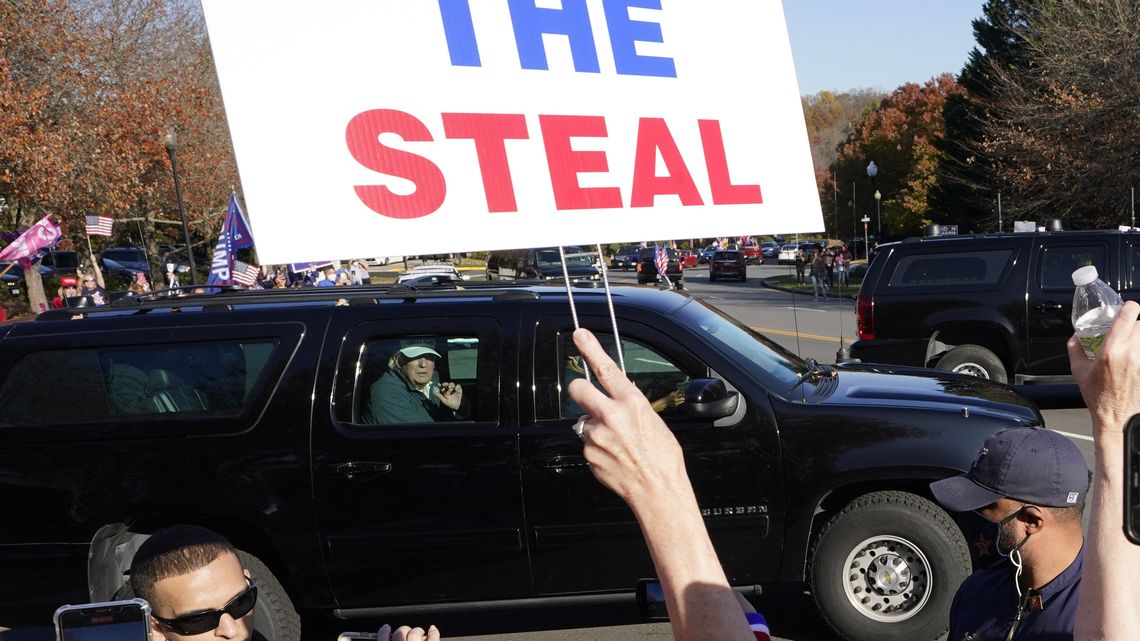 Chanting “This isn’t over! and “Stop the steal,” supporters of President Donald Trump protested at state capitols across the country Saturday, refusing to accept defeat and echoing Trump’s unsubstantiated allegations that the Democrats won by fraud.

From Atlanta and Tallahassee to Austin, Bismarck, Boise and Phoenix, crowds ranging in size from a few dozen to a few thousand — some of them openly carrying guns — decried the news of Joe Biden’s victory after more than three suspense-filled days of vote-counting put the Democrat over the top. Skirmishes broke out in some cities.

In Atlanta, outside the state Capitol in the longtime Republican stronghold of Georgia, chants of “Lock him up!” rang out among an estimated 1,000 Trump supporters. Others chanted, “This isn’t over! This isn’t over!” and “Fake news!” The streets were awash with American flags and Trump banners.

No immediate violence was reported, though at one point, police moved to separate Trump opponents from supporters. Biden held a slim lead in Georgia, which hasn’t gone for a Democrat since 1992.

“There’s election fraud going on here,” said Kelley, claiming that voters in Georgia, a state with a GOP governor and secretary of state, had improperly counted the ballots to put Biden ahead. “Even though I live in Tennessee, I’m an American, and I want to make sure Americans have a voice in the election.”

He planned to make the 10-hour trip to Washington next week to demonstrate on the steps of the Supreme Court, where Trump and his lawyers have vowed to eventually make his case.

Underscoring the hard feelings on both sides of the nation’s deep political divide, anti-Trump protesters in Washington booed, yelled obscenities, shouted “Loser! Loser!” and gave the finger to Trump’s motorcade as the president returned to the White House from a golf outing Saturday.

Contrary to the claims of Trump supporters, there has been no evidence of any serious vote fraud. And some Republican elected officials around the country began to distance themselves from Trump and urge him to accept the outcome gracefully.

The utter rejection of Biden as the legitimate president by Trump and his supporters appears to represent something new in American political history, said Barbara Perry, presidential studies director at the University of Virginia’s Miller Center.

“We typically haven’t had a leader who loses the presidency who then tells his followers, `This is false. This has been stolen from us,’” Perry said. “Incumbent presidents have been mad, so mad they didn’t go to the inauguration, but not like this, where they are leading those people to say this is fraudulent.”

A couple of thousand Trump supporters gathered at the Pennsylvania Capitol in Harrisburg. Pennsylvania played a crucial role in Biden’s victory.

“If we don’t stop this today, it’ll all be over,” Bruce Fields, 66, said of news organizations declaring Biden the winner. “Otherwise we can kiss freedom goodbye.”

At the Arizona Capitol in Phoenix, a crowd swelled to more than 1,000 within hours. Biden won Arizona on his way to victory in the Electoral College.

“It’s very suspicious that President Trump, with the red wave we’ve been seeing in Arizona, is struggling,” Kelli Ward, former state senator and chairwoman of the Arizona Republican Party, told boisterous pro-Trump demonstrators. “I want to know if there is any discrepancy with the numbers coming out of the machines.”

More than 1,000 people gathered at the Texas Capitol in Austin, with police keeping Trump and Biden supporters on opposite sides of the street. Several hundred demonstrators turned out in Salem, Oregon, for a “Stop the Steal” rally.

Even in a place that wasn’t close, Trump supporters gathered in droves to express support for him and vent frustration over the outcome of the election. Outside North Dakota’s Capitol in Bismarck, the state’s all-Republican congressional delegation joined chanting, sign-carrying protesters.

A few skirmishes broke out between Trump backers and pro-Biden and Black Lives Matters demonstrators, with one BLM supporter attempting to handcuff himself to a Trump supporter. The two men began wrestling on the ground.

An officer escorted the Black Lives Matter supporter to a squad car. It was unclear if he had been arrested.

In Lansing, Mich., about 50 Trump supporters and a smaller group of marchers carrying Black Lives Matter flags converged on the state Capitol, where they pushed, shoved and shouted at one another in a tense standoff. But within moments of the race being called, a few from both sides broke into prayer, and at least one pair hugged.

Frank Dobbs, 40, of Henderson, Nevada, brought a bullhorn and a Trump 2020 flag that he wrestled with in a stiff wind during a rally outside the Clark County registrar of voters office in North Las Vegas.

“It’s not over until it’s over. There’s still the courts. If ever there’s ever a time to expose widespread fraud, this is the president to do it,” Dobbs said. “The media doesn’t decide who wins the presidency. The legal voters of this country decide.”