If Joe Biden had a doppelgänger at he debates, is he even a legitimate candidate?!

Joe Biden vs. Debate “Biden”: Just Not the Same Guy 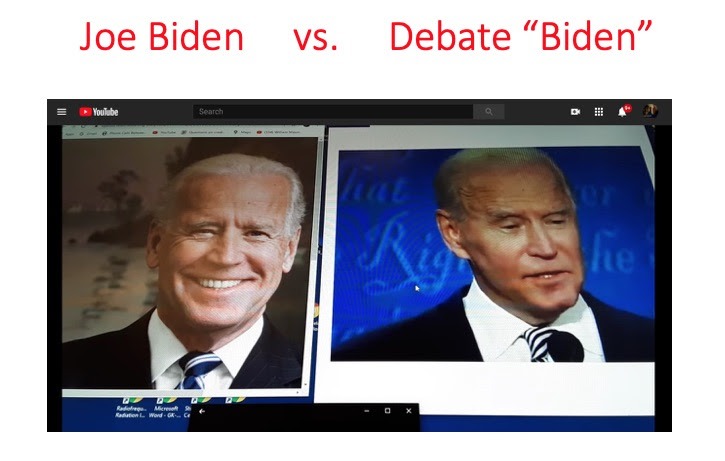 Having dealt extensively with body doubles (in the case of Paul McCartney and of Hillary Clinton, for example), it was probably easier for me to notice that the guy who debated Donald Trump on the national stage (twice, in fact, the second time in Nashville, TN) was not Joe Biden than for most of the public. Having made that observation, however, it became incumbent upon me to bring the matter to the attention of the appropriate authorities, where a submission has been made to the FBI Field Office in Nashville by a California attorney of note with support from my friend and colleague, Scott Bennett, who, like myself, is a former commissioned officer of the US military (Scott, Army; me, Marine Corps).

As I understand the matter, the fraud involved here violates 52 USC 30102 on the organization of political committees, including the following:

(2) Any candidate described in paragraph (1) who receives a contribution, or any loan for use in connection with the campaign of such candidate for election, or makes a disbursement in connection with such campaign, shall be considered, for purposes of this Act, as having received the contribution or loan, or as having made the disbursement, as the case may be, as an agent of the authorized committee or committees of such candidate.

Be that as it may, the American people are entitled to know that the so-called Democratic Party has been perpetrating a fraud upon the public, where their designated candidate, Joe Biden, appears to be in the stages of Parkinson’s Disease, including the loss of his cognitive abilities, where the anti-dementia medication he is taking has the unfortunate side effect of incontinence, such that he could not participate in a public debate with his opponent, Donald Trump, for 90 minutes without changing his adult diaper. For that reason, it appears, the DNC resorted to “Plan B”, which was to use an actor who strongly resembles Joe Biden in his place. This has been done without notice to the American people and clearly constitutes a form of campaign fraud upon the public, which I substantiate as follows:

I, James H. Fetzer, Ph.D., declare and state as follows:

I declare under penalty of perjury of the laws of the State of Tennessee that, based on a good faith belief and information, the foregoing is correct and true.

EXHIBIT B: They have different colored eyes

James Woods was the first to observe that the double has brown eyes, while Biden’s eyes are blue.

Thousands upon thousands of additional examples are readily available on the internet via a search.

EXHIBIT D: Some photos leave no room for doubt

It turns out that ears cannot be surgically altered and are just as distinctive as fingerprints.

The body double and Jill stand apart, not close together, where she is not beaming but appears to be distressed and he is not smiling, which is one of Joe Biden’s distinctive behaviors

With the double, she looks grim, he is not smiling, and they are remain physically separated. She is not reacting the same way because this is not her husband. It would be easy to find a huge number of photos on-line, because they are using the double a lot.