United Kingdom has morphed into a “Covid-obsessed police state”.

Britain died for me this week. It’s become a Covid-obsessed police state, and I don’t understand what it stands for anymore 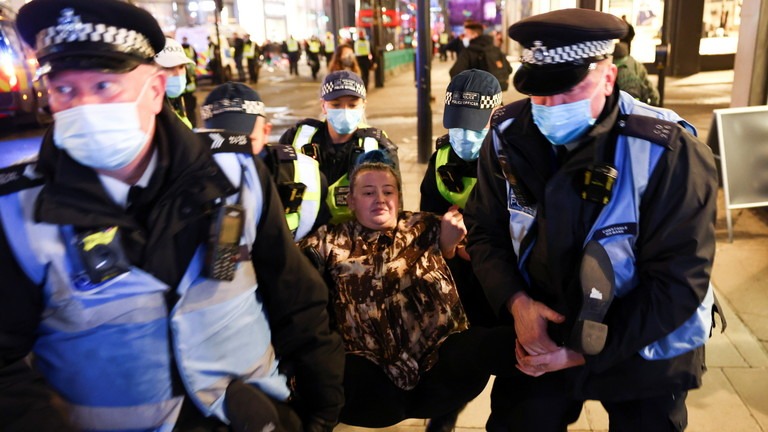 A woman is detained by police officers as protestors from the Million Mask March and anti lockdown protestors demonstrate, amid the coronavirus (COVID-19) outbreak in London, Britain November 5, 2020. © REUTERS / Henry Nicholls

I’ve always been proud to say I’m British – until now. The authorities’ bloody-minded determination to implement lockdown rules at the expense of people’s wellbeing is not what our great country should be about.

Sometimes you can be too close. You are looking, but you don’t see it. That’s where I found myself this week with the current state of Britain, amid another round of ever tighter restrictions caused by the pandemic.

Don’t get me wrong. There are loads of things I’ve always loved about my country – our traditional British good manners for example. Rather than see it as a sign of weakness, I pride myself on our reputation for queuing in an orderly fashion. I also like that we hold the door open for the person behind us.

I admire our outstanding National Health Service, which allows everyone to access medical treatment without having to dig out a credit card or an insurance plan. And I enjoy flying British Airways over far-flung lands, offering me some form of attachment – even if it is superficial.

I won’t apologise for tea being regarded as the boring and bland equivalent to freshly ground coffee – it’s our drink, and I love it. And the way we honour our war heroes with the humble poppy is thoroughly respectful.

But this week, some of that pride in being British died for me. It’s a very different sentiment I’m feeling. Beyond disillusionment. Fury even.

How could Britain have fallen so far in the way it treats its own people?

It began with the horrifying detention of a 97-year-old grandmother by police in the Yorkshire town of Market Weighton. Her daughter, a qualified nurse, wanted to bring her home from a care home to look after her during lockdown and quietly wheeled her out of the home.

However somewhere along the line, a jobsworth felt the need to justify their existence and reported what had happened. The episode ended with her granddaughter in tears filming a video, showing her own mother in handcuffs inside a squad car, while the old woman sat in another car, completely bewildered.

The police’s response? They were responding to “a report of assault.” Incredible.

The horror continued as students at the University of Manchester’s Fallowfield halls of residence awoke to find workers erecting fences around their facility to ensure they couldn’t leave. They were being installed following government guidelines asking students not to return to their permanent homes.

One student said: “They’re huge metal barriers, they’re connected to one another and there’s literally no gaps….it makes it feel like we’re in a prison.”

In what version of the United Kingdom do we keep our bright, young people caged like dogs? Unsurprisingly, some of the outraged students began to rip them down, causing even more angst.

Another university using its power to force students to bend to its will is world-famous Cambridge. It announced that anyone who leaves its halls of residence won’t be able to graduate or progress to the next year. That’s despite each paying at least £9,250 per academic session.

Then there was the Ripped Gym in Harlow, Essex. It opted not to close, in breach of the government’s latest lockdown. The morality of that is debatable, but the gym claims it didn’t sell any long-term memberships and offered only day passes. Whatever you think of the decision, what is beyond argument is that it didn’t need four police cars and approximately 20 officers to descend in a raid-style scenario.

Were they expecting John Gotti? Rather, it was a well-meaning business owner and some locals on treadmills. The owner ended up being dragged away and was still in police custody at the time of writing.

Contrast this with the most tragic occurrence, the death of Corey Liversedge. This 16-year old from Aberdeenshire took his own life as anxiety overcame him as a result of the suffocating nature of lockdown.

His grieving parents summoned the bravery to raise awareness of his plight, with his mother saying, “It’s not just children with diagnosed mental health conditions — it can happen to any child, and Corey was any child.”

Britain used to be a nation that cared. But now, it seems that the priority is treating any slight infraction of lockdown rules like a terrorist attack, while vulnerable people are left to struggle along on their own without help from the wider community.

The complete lack of emotional intelligence from our authorities was evidenced by London police arresting 104 people in a single night for breaching regulations.

What happened to community engagement? Aren’t we all supposed to be on the same side? Incredibly, it’s now even illegal for anyone to enter or leave Wales, unless it is covered by the contentious term of “essential travel.” The police, of course, are monitoring the roads and pulling over cars to conduct checks.

Yes, the pandemic is a serious situation and we should not be complacent about 48,000 people dying. Precautions have to be taken.

But what is happening across the UK is nothing short of barbaric. Our police have turned into robots, carrying out whatever they are asked to, no matter how cruel or wrong.

The government has forgotten what a wonderful population they are tasked with representing, and are treating us all like North Korea does dissenters.

They say you never really truly appreciate something until it’s gone. And I’m petrified that the courteous, courageous sprit that defines Britain is on the point of disappearing for good, crushed by the uncaring iron first of the Covid-obsessed authorities.

We deserve better than this.