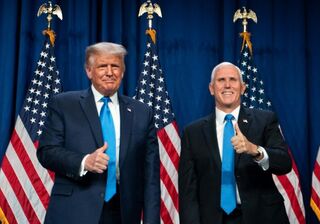 What a beautiful day to be alive in the greatest nation on God’s Green Earth. Sun shining, birds singing and Trump’s inner circle glowing with the quiet joy of triumph as they slowly spill the beans. In the words of insider Dr. Charlie Ward, “I can confirm 100%…Donald Trump won by a complete landslide…The [numbers] are off the scale.”We did it!

Trump did it. The MAGA rally turnouts did not lie. We put our votes where our hearts were and, unbeknownst to us and the Biden team, our legal votes were being correctly tabulated in Washington D.C. Shhh, don’t tell anyone! 😉

But my fellow patriots, our job is not over. We must put our shoulders back to the plow and tackle the new task before us: PR.

No one knows the power and importance of PR better than Joe Biden. He demonstrated that with his phony “victory speech” (or was it a campaign speech?) last night.

Are we going to let Traitor Joe beat us in the PR game!?! Heaven forfend!

Donald Trump may be “golfing” (uh-huh) but you and I know that during these ten days of darkness (11/3-11/13), his team is working more feverishly than ever before. It’s always darkest just before the dawn. All their surreptitious preparations over the past four years have led up to this moment. It’s go-go-go time.

And Donald Trump? Give the man an Oscar. We were all told he was at the White House on election night. He wasn’t. With his subdued act, his miffed tweets and his therapy golfing, he’s allowing the world to think he’s “lost” re-election. He’s even allowing the people he vowed to “protect and defend” to flip him off. A malignant narcissist would never do that.

It falls to us now to match President Trump’s humility and strength with our own.

Without shame or embarrassment, we should be even louder and prouder now than we were before the election. We must not fink or slink into the darkness with our tails between our legs. Why the hell would we!?!

Donald Trump has won! We have won! America has won. She always does.

By waging a “Trump Wins” PR war, we will prove ourselves worthy of the fight Trump is waging for fair elections, not only his own re-election, but all elections for years to come.

What do we have to lose? Our pride? Fickle Facebook friends? Our reputation for being a “gracious loser”?  Pffffft.

Of course, we all have these thoughts and moments of doubt. Iagonized before coming out last week in my staunch belief in Trump’s triumph. I studied for nine hours before writing about the “conspiracy theory” of the blockchain watermark sting. My reputation, my credibility, my career are on the line. One slip and “I’ll never work in this town again,” as the old saying goes.

But Trump won! If I don’t shout that from the rooftops then I feel I will have betrayed President Trump, my fellow patriots and the Founding Fathers.

After 31 years of being held against my will in a cult-like family, I took an oath in 2016 in the words of Thomas Jefferson, “I have sworn upon the altar of God eternal hostility against every form of tyranny over the mind of man.” I blew the whistle and I lost everything including my entire family. They threatened me with legal action. I was wrongfully reported to the Anti-Defamation League. None of them could shut me up.

Standing up for Trump now!?!?! Pffft. Easy-peasy! As Jim Elliott said, “He is no fool who gives what he cannot keep to gain what he cannot lose” and I’ve got nuthin’ left to lose and self-respect to gain!

During the campaign, Traitor Joe compared Donald Trump to the Nazi Minister of Propaganda Joseph Goebbels who said, “If you tell a lie big enough and keep repeating it, people will eventually come to believe it.” (German: große Lüge)

We’ve been lied to for so long by politicians that we’re afraid to believe anything, even when it’s true, especially when it’s positive. How it’s pained me to see my fellow patriots so subdued by discouragement this week.

For decades, our spirits have been downtrodden by evil and wickedness until we despaired. Like Jimmy Stewart in Mr. Smith Goes to Washington, we grew up and concluded our childhood ideal of “Truth, Justice and the American Way” was just hooey. To quote Patton, “The world grew up. Hell of a shame.”

We can’t quite bring ourselves to believe that good is more powerful than evil. That righteousness can triumph. This has never happened before…but it just did.

Colonel Blimp said it best when he was toasting the WWI Armistice with his valet, Murdoch:

Clean campaigning,  honest whistle-stopping have won! God bless us, Everyone.

With thousands of reports of voter fraud and multiple insiders confirming the successful use of QSF Blockchain Encryption on legal ballots, we should not be slinking around dark corners with our tails between our legs. Hells no!

Now is the time to be loud and proud as we fight the PR battle at Donald Trump’s side. To assure him that he was right to fight so hard for us. That we’re worthy of his sacrifice and devotion, even when the going gets tough.That America is in our hearts and we always believed in him. That we have his back just as he has ours.

We will, of course, be accused of being sore losers by our gloating Leftist friends, family, coworkers and neighbors. Sour grapes and all that rot. As I see it, moments like this really weed out the riff-raff on social media.The great thing to remember about the Left is that they’re always Projecting. They think everyone thinks, acts and speaks as they would. They Project themselves onto us. They fail to realize we couldn’t be less like them!

Theirs is an upside-down, topsy-turvy world. If they say anything, take the opposite meaning. Therein lies truth.

Winning is the ultimate goal to them. Justice is ours.

They cheat to win. We’d rather play fair and lose.

They sulk. We accept gracefully.

They gloat. We celebrate.

They hate. We love.

They label. We accept.

They kneel for the flag. We stand and pledge allegiance to it.

They attack the anthem. We stand, hand on heart, and sing it proudly.

They conjure. We pray.

Gain is their moral code. Righteousness is our solid rock.

Money and power are their gods.

Godis our God and a Mighty Fortress He is too!

So while we’re waging our loud and proud PR war for the valid winner of Tuesday’s elections, let their allegations of sour grapes, of denying reality, or being a sore loser slide off like water off a duck’s back.

How do we do PR? Just a few ideas…Keep that Trump/Pence sign in your yard.

Keep the Trump flags flying proudly on your truck.

Get yourself blocked, brush yourself off, set-up a new account and get back in that saddle! (I have!)

Let the trolls attack you and don’t hit back! (Bullies generally don’t have staying power.)

DO SOMETHING, for Trump’s sake!

The best part of our PR war is…it’s honest. We’re not just trying to manifest Trump’s victory by some kind of “blab it, grab it” create-your-own-reality magic propoganda.

He has actually won. We should be celebrating. He deserves it. We deserve it.

So now, if anyone wants me, I’m going to be practicing what I preach! I do hope you’ll follow me and do the same!

MeWe (not set-up yet): https://mewe.com/i/lenorathompson

I close with a song my husband, Michael, had blasting at our house today. Turn up your speakers, Patriots!