Catherine Austin Fitts said two things of importance for 2021 and after. She had been
managing partner at Dillon Read Investment Bank. She was Housing Commissioner
under HUD Secretary Jack Kemp in in the Bush I admin. 1) The Bankers and other
criminals who run our government stole $50 trillion from US taxpayers. 2) She said in
1995 after examining the situation that Wall Street would never make restitution. She
concluded that so much of our pensions assets had been stolen and replaced with
worthless paper that the only exit Wall Street can see is genocidal extinction of Americans.
All Depressions are periods in which Unpayable Debts are cancelled en masse. Bankers
have saddled us with more Unpayable Debts to cancel than anytime in history which
means we are headed to a Depression far worse than 1933 America or 1923 Germany.
Debt Cancellation could be achieved painlessly if we were to arrest the Bankers, seize
their assets and use their stolen money to fund debt cancellation.

So all that is left is genocide. 6 billion plus people worldwide must die so that Bankers
can have better lives.

One method of depopulation would be vaccinations, digital tattoos and another bioweapon
far more deadly than the coronavirus. Dr Judy Mikovits said a covid vaccine could easily
kill 40 million Americans. Even more could die if they activate the nano particles that
come with the digital tattoo using microwave radiation. That could do terrible things to
the human body.

And the second bioweapon that Bill Gates hinted at could kill a few hundred million worldwide.

Starvation has been used. 3 million Gentile Americans starved to death in the 1930s. But we now have 205 million more people now than then. And Biden-Harris want to flood America with 60 million immigrants. In fact the first change we could see in 2021 is opening the borders to illegal aliens. That should set us up for 60% pay cuts through hyperinflation when, not if, the Dollar Dies. Previously, the Federal Reserve created the illusion of wealth by printing up tens of trillions of I Owe You Nothing Federal Reserve Notes to buy free stuff from overseas. All in an attempt to delay the impact of over population through immigration legal and illegal.

So in 2021 we will have a population of minorities in the cities who have been told for decades in the public schools that they are poor because a rich white man robbed them.
The Civil War is by design. It will depopulate cities as the Dollar Dies, wages are cut 60% and Americans die violently rather than starve in the big cities waiting to die. Of course societal collapse will be especially hard on the elderly who are poor and everyone in bad health. 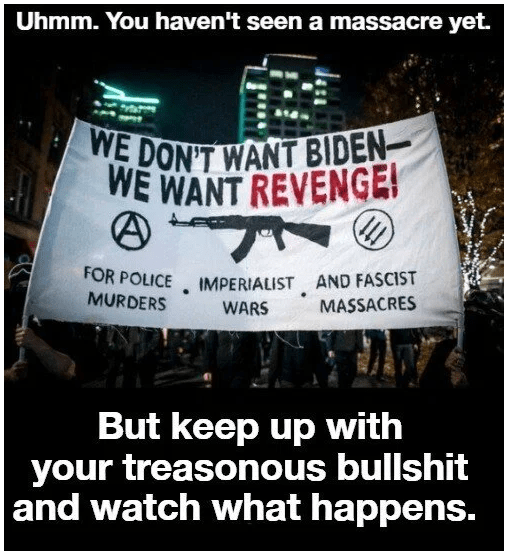 The man in charge of election fraud at the DOJ resigned rather than send Democrats to jail for election theft. That explains a lot about the DOJ never filing criminal charges against Bill, Hillary and Chelsea Clinton over the pay to play racket at their Foundation. They had probable cause from Charles Ortel’s investigation going all the way back to July of 2016.

The DOJ and the FBI and the CIA (Cocaine Importing Agency) are proof that not all of Trump’s enemies are Democrats. As I said, Catherine Austin Fitts told us they stole $50 trillion from us. That money greased a lot of palms.

Time is running out for state voter recounts but that was factored into the vote by mail scheme. All that remains are lawsuits in the states and appeals to the Supreme Court. Whoever wins that battle will instantly be a hated and despised enemy of the losing side.

But that is what the Uber Billionaires want, a divided nation. Ripe for Civil War when the Dollar Dies. Not sure of the timing of that, probably sometime in 2021 or 2022.

Another source of social agitation after the election will be vaccinations and chips. Trump said they would be voluntary. Don’t believe that. It will take a while to get around to everyone. It will be a good thing if the first few million people to be vaccinated get sick and the program has to stop. Otherwise there will be lots of lawsuits and protests in the early days. Forcing people to take chips so Bill Gates and his friends at the NSA can track you 24/7 could lead to violence and not just in America. In Mexico once things got so bad that the local police had to run up a white flag of surrender.

As I have said before, we are entering a period of reduced solar magnetism which will allow more cosmic rays (nuclear particles from distant stars) to strike the earth just like it did during the Maunder Minimum. I expect the Chinese government to collapse. No Chinese government ever survived A Grand Solar Minimum. Another year of floods and the CCP will be done. The point is that we will have 40 years of bad weather. Time to move south if you are far north. Food prices spike in a GSM as much as 400%. Once in 1709 food prices spiked 650% due to 3 volcanoes in Europe erupting and freezing the top meter (nearly 40 inches) of the ground in France.

The Federal Reserve and all Central Banks have decided to bail out worthless paper held by Uber Billionaires by inflating their currencies. Higher silver and gold prices for sure. The point is that spiking Food Prices combined with inflation and job losses will cause Nationwide Food Riots. I expect they will be the first step towards Civil War 2. The Left will attack in the cities.

The Right has all the food and the electrical generation plants and the water plus more rifles capable of reaching out and touching someone at 300 meters (328 yards.) America will soon be so broke that it will not be able to pay extortion money to illegal aliens. That will cause riots. That and the spiking food prices.

And that is when Bioweapon 2 is released. The Spanish flu, which originated in America, probably killed 50 to 100 million people. I would expect something that lethal but with a much higher death rate than that for the vaccinated ones.

As always, I must remind you that if martial law is declared, we would be one step closer to a military coup. Better, if led by junior officers rather than the professional criminals in the Pentagon.

Genocide is a feature not a bug of what the Boss has planned for you.

Lest anyone forget: David Rothkopf was the Managing Director of Kissinger Associates back in the 1990s. He wrote the book Superclass in which he said that the world was run by 30 Families and their 6,000 Minions. The Thirty Families are the New World Order. The NWO wants to replace the sovereign decision making authority of more than 100 nations with their Absolute Power. One World government would remove the facade of democracy.

Let me close by saying this: The Boss plans to kill 6 billion Common people.  That is the challenge of our time. Surviving 5 years will be quite a feat. The survivors will be forced to change their government and to seize the assets of the Uber Billionaires to fund Debt Cancellation.