Now there are allegations of ballot harvesting to the tune of 25K nursing home residents in PA! 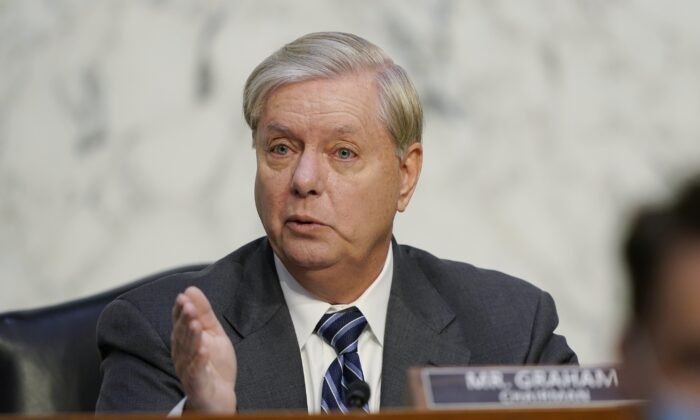 BY JACK PHILLIPS
THE EPOCH TIMES

Graham, in an interview with Fox News, did not provide specific evidence of the claim. He said there were up to 25,000 cases that are being investigated as Pennsylvania remains embroiled in legal fights over the vote-count after President Donald Trump’s team filed lawsuits and as major news outlets called the race for Democratic candidate Joe Biden.

“I’ve got more information. We’re now finding potentially that 25,000 nursing home residents in different nursing homes requested mail-in ballots at the exact same time,” Graham said on Fox News on Monday. “You can’t ballot harvest in Pennsylvania. What are the odds that 25,000 people in different locations of the same age group requested at the same time a ballot? Somebody is up to no good in these nursing homes.”

Graham again asserted that he is working to back President Trump in the midst of allegations about voter fraud and irregularities during last week’s presidential election. The Epoch Times will not call the race until all legal challenges and vote-counting is finished.

“We owe it to those who voted for President Trump and the country at large to test the system. If we don’t deal with voting by mail in 2020, we’ll never win the White House again,” Graham said. “The biggest issue, the biggest difference between 2016 and 2020 is the mass use of voting by mail. It is the wild, wild West at post offices and there are no rules. And if we don’t come up with some rules pretty soon, we’re going to get killed in perpetuity in presidential campaigns.”

The Pennsylvania secretary of state’s office has not yet responded to an inquiry regarding Graham’s assertions.

“While most allegations of purported election misconduct are of such a scale that they would not impact the outcome of an election and, thus, investigation can appropriately be deferred, that is not always the case,” Barr said. “Furthermore, any concerns that overt actions taken by the Department could inadvertently impact an election are greatly minimized, if they exist at all, once voting has concluded, even if election certification has not yet been completed.”

Barr furthermore stipulated that it’s not clear whether irregularities have impacted the outcome of the presidential election.

“I provide this authority and guidance to emphasize the need to timely and appropriately address allegations of voting irregularities so that all of the American people, regardless of their preferred candidate or party, can have full confidence in the results of our elections,” Barr said. “The American people and the leaders they freely elect deserve nothing less.

Trump currently is behind Biden by about 45,000 votes, according to election data.

A report from the Philadelphia Inquirer noted that there are roughly 700 nursing facilities as well as 1,200 care homes in the state. Ballot-collection efforts are illegal in the state, according to state law, as Graham previously mentioned.