Biden Locked Out of National Security Briefings As He Should Be

ODNI: No National Security Info for Biden Until Win Confirmed 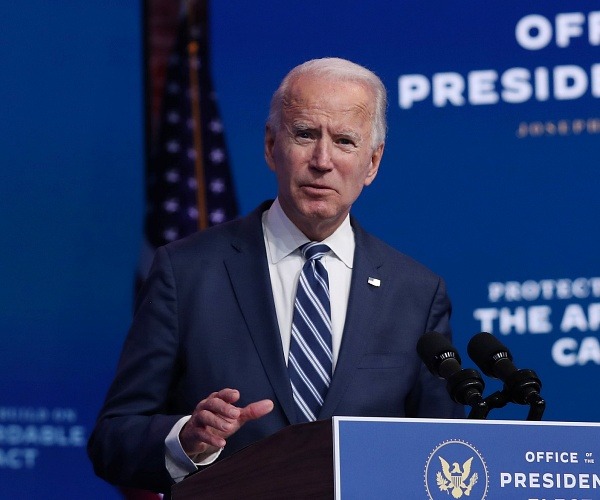 Joe Biden addresses the media about the Trump Administration’s lawsuit to overturn the Affordable Care Act on November 10, 2020 at the Queen Theater in Wilmington, Delaware. (Joe Raedle/Getty Images)

Joe Biden is not getting top-level national security information until the General Services Administration ascertains that he officially defeated President Donald Trump, the office of Director of National Intelligence John Ratcliffe has confirmed.

“ODNI follows the statutory direction provided in the Presidential Transition Act, which requires ascertainment of the candidate by the administrator of GSA prior to supporting a potential presidential transition,” Ratcliffe’s office said in a statement to NBC News Tuesday.  “ODNI would not have contact with any transition team until notified by the GSA administrator.”

GSA chief Emily Murphy still has not signed the office’s letter of ascertainment, which has been required since the transition act was passed 60 years ago to provide information and to unlock money used in the transition process.

This means Biden is not receiving the President’s Daily Brief, a compilation of intelligence reporting for the most senior officials in the government. Trump hasn’t authorized its release, NBC News reported.

Biden confirmed to reporters Tuesday that he isn’t getting the briefing, but he said it’s not necessary at this time, as he’s not the sitting president.

“Access to classified information is useful but I’m not in a position to make any decisions on these issues anyway,” said Biden. “It would be nice to have it but it’s not critical.”

Biden transition officials said that since he’s not getting intelligence briefings, it’s not clear if his top advisers are getting any classified materials, meaning there could be delays in investigations relating to security clearances. That could hinder the Senate confirmation process if Biden takes office, they commented.

David Priess, a former CIA officer and expert on intelligence briefings, told NBC News that during the hotly contested election between Al Gore and George W. Bush, then-President Bill Clinton’s administration decided to give the briefings to Bush in early December, even before the election was decided in Bush’s favor. Gore, as Clinton’s vice-president, was already getting the president’s daily briefing.

Meanwhile, the State Department is also not able to facilitate calls between Biden and the foreign leaders who are already starting to contact him until the GSA ascertains the election, according to the former vice president’s team.