ELECTIONgate: Democrats so desperate they falsely claim a USPS whistleblower recanted when he denies it—WOW!

What is going on here? 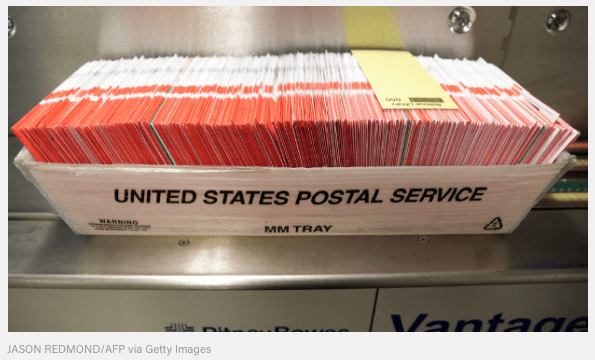 The bizarre case of the Erie, Pennsylvania, U.S. Postal Service whistleblower who claims that he overheard his supervisors discussing backdating the postmarks on absentee ballots took another twist Tuesday when Democrats on the House Oversight Committee claimed that the whistleblower recanted, only to have the whistleblower release a video denying that he recanted.

The whistleblower, who has been identified as Richard Hopkins, claimed in an affidavit that he overheard his supervisor telling another postal employee that he had backdated a group of mail-in ballots that were collected on Nov. 4 to make it appear that they had in fact been mailed on Nov. 3. Under a ruling from the Pennsylvania Supreme Court, ballots that were mailed by Nov. 3 will still be counted (pending a legal challenge to this ruling) even if they were received after Election Day.

It is important to note that, even if the whistleblower’s allegations are true, none of the ballots received after Nov. 3 have yet been counted or added to either candidate’s total. Thus, the whistleblower’s allegations do not directly pertain to Biden’s current lead in the state. The state has revealed that about 10,000 votes total were received in the mail between Nov. 3 and Friday, but those ballots have remained sequestered and uncounted pending the Trump campaign’s legal challenge to their inclusion. Presumably, if the Trump campaign’s challenge fails, those ballots will only serve to increase Biden’s current lead in the Keystone State.

Nevertheless, the whistleblower’s affidavit has become a flash point of controversy as it represents one of the few concrete allegations of voter fraud that have been brought forth by the campaign. The affidavit appears to have been the reason for remarks by Senator Lindsey Graham (R-S.C.) over the weekend promising a Senate Judiciary Committee investigation into voting irregularities.

The controversy intensified Tuesday afternoon when Democrats on the House Oversight Committee released a statement claiming that the whistleblower had “recanted” his testimony, a claim that was magnified by many in the media.

Project Veritas, which publicized Hopkins’ story, did not waste time refuting this characterization, releasing a video of Hopkins saying that he did not recant his testimony.

In a subsequent tweet, O’Keefe claims that federal investigators “intimidated” Hopkins and complains that he was interviewed for four hours without legal counsel. He further promised a full release of the transcript of that interview.

Although Hopkins has denied “recanting,” it is not yet clear what he did say to federal agents during their interview or whether he may have revised some details that he claimed in his affidavit.

Hopkins was also praised by President Donald Trump on Twitter, who stated, “A brave patriot. More & more people are stepping forward to expose this Rigged Election!”