Scientific Data Analysis Of Voting Fraud In MI Shows 69,000 Votes Were Transferred From Trump To Biden

Dr. Shiva Ayyadurai, who is a MIT trained data scientist and Fulbright Scholar, along with Bennie Smith a Democrat, who is a software engineer, data analyst and an election commissioner and Phil Evans, who is also a trained engineer and data analyst, discuss some very troubling findings after reviewing the election data coming out of Michigan. Dr. Ayyadurai is a US Senate candidate in Massachusetts, which is a contributing factor as to why he began looking into the integrity of our voting systems.

Dr. Ayyadurai’s discovered through a series of FOIA requests related to his own election that ballot counting machines don’t directly count ballots.  Instead, they take an image of the ballot that is submitted to them, and then they tabulate the votes based on the ballot images collected.

Federal election statues dictate that all election records must be held for 22 months.  However, Dr. Ayyadurai discovered that many states do not retain the ballot images produced by the machines.  The default settings of the machines automatically store the ballot images, so this means election officials are manually disabling the image storage feature.

Because ballot images are not being retained in states like MA and MI, the election results cannot be meaningfully audited, leaving ambiguity as to the actual election outcome.  The only way to audit the results of an election without ballot images would be to manually count the ballots, which is very difficult to do.

Dr. Ayyadurai learned that in 2001, a weighted race feature was added to Global Election Systems (GEMS 1.18.1) voting systems.  This feature allows elections to be skewed to one candidate or another based on the settings of the software.  This is not a hack, but a built-in FEATURE of the software.  Why this feature exists in US ballot tabulation machines has never been explained.

Not only does the software allow for the weighting of election outcomes, but the way votes are stored and counted is also problematic.  The systems store the votes as fractional decimals instead of whole numbers.  This means the machines can be set to tabulate half a vote, which makes no sense at all, yet that’s how they were designed.

After voting “glitches” were reported in Michigan, Dr. Ayyadurai’s team decided to analyze the top four counties in MI for irregularities. They looked at data from Oakland, Macomb, Kent and Wayne counties.  What they found was absolutely shocking. Data analytics show, at a minimum, 69,000 votes were TRANSFERRED from Trump to Biden in these four counties, in a pattern that is consistent with algorithmic weighting of a race. 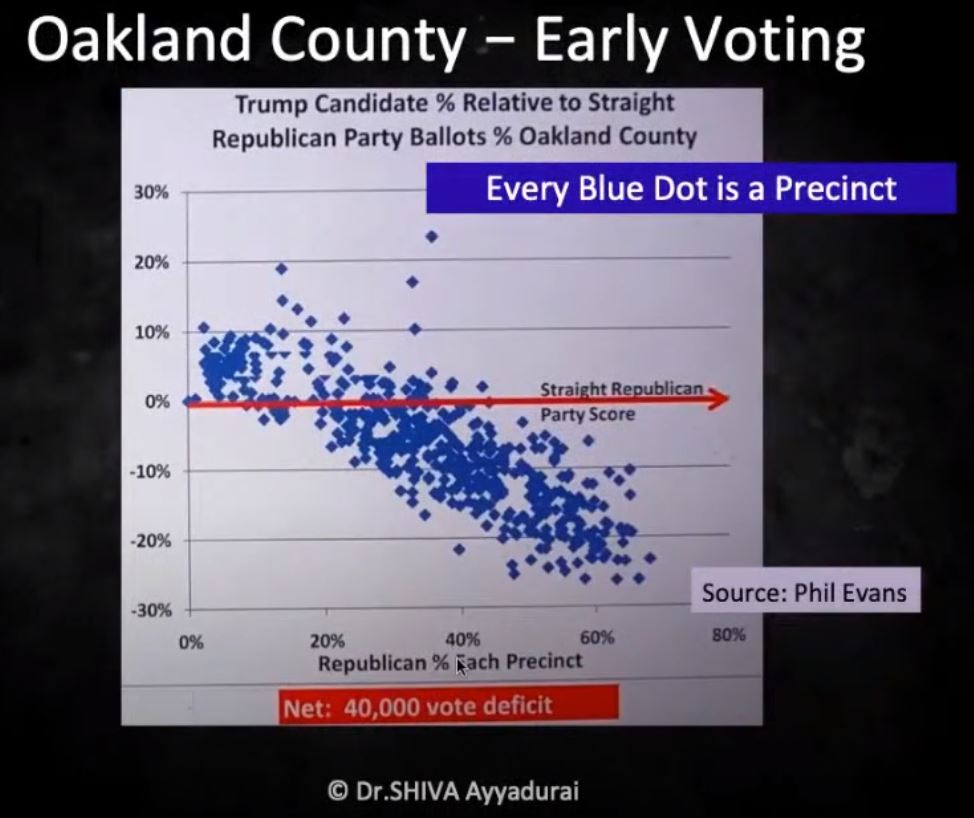 So if a given precinct had 50% of people vote a straight Republican ticket and 50% of them vote for Trump on an individual ballot, we would see a dot at 50% on X axis and at 0% Y axis.  Intuitively, we would expect most dots to fall along the 0% Y axis line.

In other words, if a given precinct tends to vote 60% straight Republican tickets, we would most likely expect to see about 60% of people in that precinct who vote on the individual ballots to chose Trump as well.

Instead, what the data shows is a clear linear relationship that starts at about the 20% X axis mark, where the more Republican a precinct is, based on straight party tickets, the less likely people who vote on individual ballots in that precinct are to vote for Trump.

Not only is this relationship inverted from what we would expect to see, the manner in which it displays itself is what really gives the fraud away.  Notice the linearity of the slope.  This linearity can only be the product of an algorithm. The perfection of the slope and distribution is what gives the game away.

This same slope is observed in three of the counties that were analysed.  It shows up in early voting data as well as election day data.  The pattern is consistent spatially as well as temporally.  There is absolutely no way this is the product of anything other than an algorithm.

This is an impossibility. People are sent to jail in fraud cases with far less evidence than this.

If this was a legitimate election, we would expect to see a scatter distribution along the 0% Y axis where the red arrow is, with perhaps either a positive or negative bias along axis depending on how much people liked or hated Trump.

Here’s what Wayne county’s results look like where no algorithm was detected.  Wayne county is strongly Democratic, so its likely they didn’t bother rigging the votes here.  There could still be cheating going on here, but this what we would expect all the graphs to look like. We can see voters here liked Trump a lot more than the Republican party. 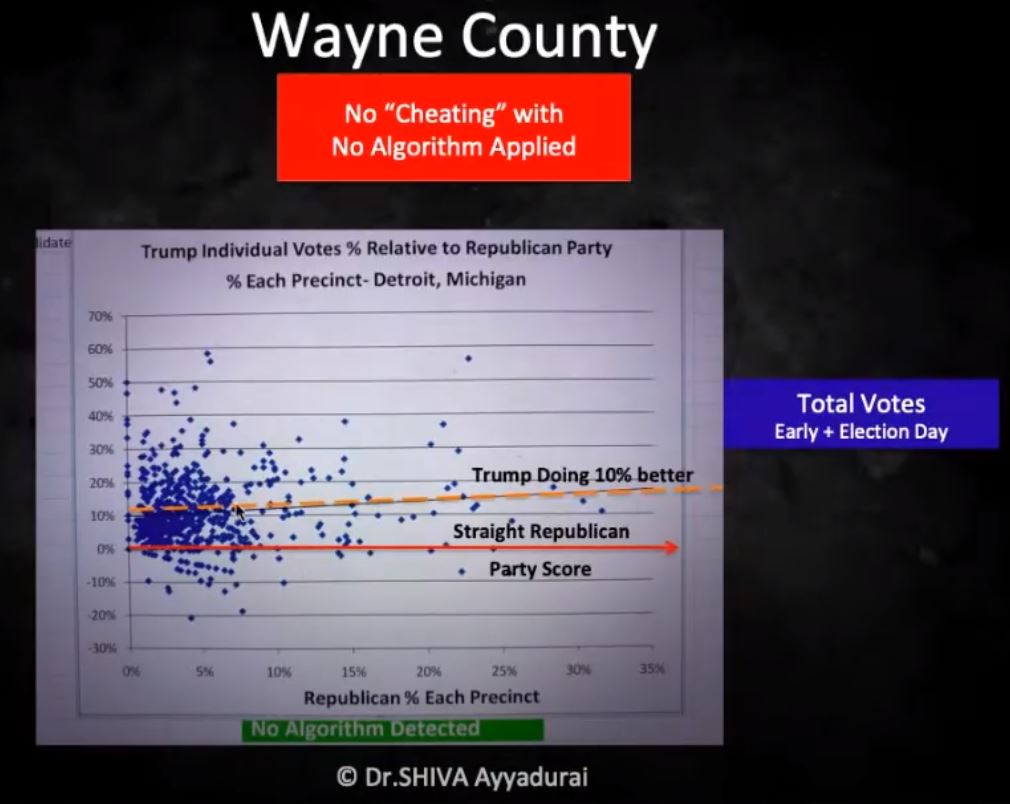 When Dr. Ayyadurai began complaining on Twitter about the lack of transparency and the fact that ballot images were being deleted, he was attacked by an organization called The National Association of State Election Directors.  This organization is funded by corporate interests with ties to the Rockefellers and other international business conglomerates.   The NASED actually contacted Twitter and tried to get him banned.  Keep in mind he’s a Senate candidate. This organization has been working with the election software companies involved in this fraud.

This software is in use far beyond the four counties that were analysed by Dr. Ayyadurai’s team.  It explains how Joe Biden, a man who couldn’t get more than a handful of people to turn up at one of his “rallies” managed to get more votes than Donald Trump, a man who routinely held rallies that drew over 50,000 screaming fans who were collectively chanting “WE LOVE YOU!”

Biden did not win this election, and now there is ZERO doubt about that fact.