SEDITION: THE NEW YORK TIMES Published a False Headline and Story to Remove Trump from Office

If President Trump invokes the Insurrection Act, as Abraham Liincoln did, the media, starting with AP, NYT, and Twitter as well as YouTube, is immediately and deeply exposed to “by name” arrest of authors, editors, and managers, for

Executive Order—Arrest and Imprisonment of Irresponsible Newspaper Reporters and Editors

Even if he does not, they are still liable. 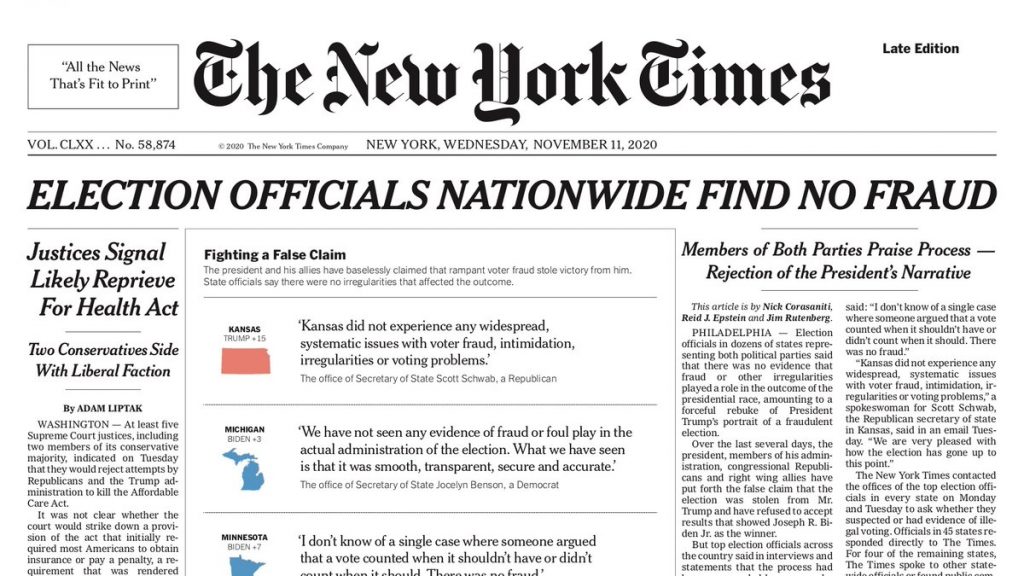 From a top person in this space:

All media reports about Biden winning are false — apart from the fraud, the certification process has not been completed and Trump has not conceded, which is why GSA has properly refused to start transition funding etcetera.

If and when electoral fraud is proven, the media can be held complicit in that fraud by virtue of their varied roles in voter suppression, disinformation, etcetera.

The media may cite the Obama Administration’s modification of the Smith Mundt Act to legalize propaganda by the US Government as a defense but that will not hold because any orders to lie they have received from CIA or the military-industrial complex as illegal orders that should have been ignored.

As best I can tell, the President has the power now, before the Constitutional process goes any further — to arrest the entire chain of command at AP and NYT and Twitter as well as YouTube as a strong message to all the others.

The truth at any cost lowers all other costs.  All these media people are treasonous lying sacks of shit who should be convicted and jailed for the entire four years of the second Trump Administration, along with all Democratic and Republican Party leaders — and their donors or puppet-masters.