Is the Dominion Voting Systems “crash and burn” a tangled web or a web of deceit?

Voting Systems – Just Tangled or a Web of Deceit?

“Dominion is ready to make a difference in your next election,” it declares on its ‘about’ page which tongue-in-cheek features an Elvis Presley impersonator. 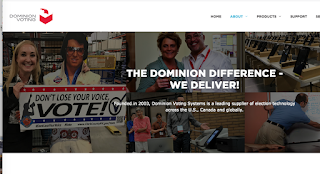 The U.S. electoral voting system is confusing and perhaps deliberately so. Many people admit as much, even those who forget what they said yesterday. The Guardian newspaper published a two-part exposé 18 months ago: “America’s new voting machines bring new fears of election tampering” and “They think they are above the law’: the firms that own America’s voting system” — The Guardian, Apr 2019. At the time Russiagate was still in full flight, with fears of foreign interference in the election process.

The tangle of companies that make voting machines, their software and support systems, are privately owned and opaque. Amazingly so. Even to explain the history of the past two decades is like following a dizzying card game, with a fair dose of chicanery, feints and sleights of hand.

Either no-one really wants to be in the voting machines business or they’ve got an ulterior motive that goes beyond the mere running of elections.

Let’s start with the name that’s in the news. Canada’s – or Colorado’s – Dominion Voting Systems.

Dominion’s software traces its roots to Sequoia Voting Systems which in turn roots back to the Irish printing conglomerate Jefferson Smurfit, which spun off its punch card voting product in 1983 as Sequoia Pacific Systems Corp. In 1984, Sequoia bought the Automatic Voting Machine Corporation.

In 2002 De La Rue, the printer of Britain’s pound notes, bought Sequoia from Smurfit for $23 million but it lost money, and in March 2005, De La Rue sold Sequoia to Smartmatic.

However Smartmatic was under investigation for its Venezuelan origins at a time when the U.S. was at loggerheads with Caracas and the late President Hugo Chavez. Thus upon acquiring Sequoia Voting Systems, Smartmatic promptly sold Sequoia to SVS Holdings (of Westhill, Aberdeenshire?) for an undisclosed price.

That brief connection to Smartmatic mean that Sequoia machines today use, at least in part, vote-counting software developed, owned and licensed by Smartmatic. This was revealed by a submission to the National Institute of Standards and Technology during a 2008 offer by rival Hart InterCivic to acquire Sequoia.

Talks between lawyers for the two companies suggested that Smartmatic may have indirect and functional control over Sequoia’s machines. In return, “Sequoia takes the position that Smartmatic’s ownership of the Sequoia voting machines software, and any “indirect control” by Smartmatic over Sequoia is inconsistent with agreements made with the federal government.”

Hart InterCivic’s lawyers said Smartmatic owned the intellectual property rights to the software used in Sequoia’s machines and had agreed to license that software to Hart. Furthermore the proposed agreement said Sequoia would not compete with Smartmatic in Latin America, the Philippines, and Belgium.

The document goes on to allege that “Sequoia Voting Machine Software Is Vulnerable to Tampering”. It  states:

“Princeton Professor  of  Computer  Science,  Andrew  Appel,  testified  as  an  expert  in litigation  in  New Jersey involving the Sequoia Advantage voting machines that it’s “very easy to replace the software inside a computerized machine so it tells the voter it is voting for one  candidate  but  really  puts  the  vote  in  the  wrong  column,”  and    “You  can  even program  it  to  do  that  only on  election  day”.”

Other threats include USB thumb drives, it says and, worse still, that any testing enters the Logic and Accuracy mode distinct from Election Day mode, which enables malicious firmware… to avoid operating in an incorrect manner while in testing mode.”

Just like the Volkswagen diesel emissions scandal, the machines operate perfectly when tested and then revert to a ‘corrupt mode’ in actual use.

It was the ES&S deal that put Dominion on the map when it bought the former Diebold operation. Diebold is famous for its automatic teller machines (ATMs) and retail cashier machines and entered the voting machine business with its 2002 acquisition of Global Election Systems.

Thus Sequoia has one foot in Diebold/ES&S/Optech (which is now Dominion Voting Systems) and another foot in Smartmatic. Those interests are brought together in Dominion which, through Sequoia, uses the Smartmatic vote-counting software which was the very reason the CFIUS blocked Smartmatic from holding Sequoia in the first place.

In 2009, Diebold/Premier was sold to ES&S (a merger of Business Records Corporation and American Information Systems — that controls one half of the Optech ballot scanner, with Sequoia owning the rights).

Objection! Shouted another voting services company, Hart Intercivic, Inc. (see below). The combined company accounted for seventy percent of US voting equipment. So the Department of Justice stepped in and said, halt! Diebold/Premier was thus purportedly “dissolved” and its assets split between ES&S and Dominion Voting Systems.

That rival who broke up the party was Hart Intercivic, Inc.. It filed a lawsuit against Diebold Incorporated and Election Systems & Software, Inc. (ES&S) alleging antitrust. Based in Austin, Texas, Hart traces its origins to the Bain & Co. (often linked to the CIA) and Mitt Romney campaign donors.

Founded in 2003, or 2000, incorporated in 2009, Dominion Voting Systems was founded by CEO John Poulos and James Hoover. In a letter of 2016, Dominion asserts: Dominion is entirely owned by its employees, who are U.S. and Canadian citizens.

The Dominion Voter Systems uses the vote-counting software of the opaque Smartmatic, founded in Venezuela, registered in several countries including Britain.

Smartmatic was founded in Caracas, in 1997 and is linked to George Soros through its current owner Lord Mark Malloch-Brown who sits on the board of the Soros Open Society Foundation. Indeed, the ambitions of Dominion Voting Systems seem rather similar:

“In 2014, at a meeting of the Clinton Global Initiative, Canada-based Dominion Voting Systems made a philanthropic commitment to donate its election technology to emerging democracies outside the United States as part of a three-year project.”

The British or Corporate Crown angle has also been picked up by Great Game India. INVESTIGATION: Did Crown Agent Dominion Voting Systems Rig The US Elections 2020

Smartmatic is used in 30 states and Puerto Rico. It’s main focus is “electronic voting systems, intelligent and integrated security systems for large enterprises and governments, and advanced solutions for people registration and authentication for a wide range of government applications”.

According to former Arizona Democratic Party insider and social media millionaire Jeffrey Peterson, those links to Latin American voting systems may not be coincidence. Peterson says local politicians have imported the vote fixing skills of Mexico’s PRI which has a century-long history of stentorian corruption and election rigging.

WHY THIS MATTERS NOW

Exactly whose systems failed on election night, November 3rd, 2020, is still being investigated however the evidence comes from affidavits,  video footage,  official reports of observer expulsion and statistical analysis of results that defy mathematical probability.

Russell Ramsland, founder of Allied Security Operations Group, is a long-time critic of the U.S. electronic voting system. He says he personally witnessed fraud during the 2020 Presidential election campaign. He says fraud can occur in many ways.

The voting results of 28 U.S. states are held in a database on a server in Frankfurt, operated by a company Scytl, based in Barcelona, that is in bankruptcy proceedings and whose ownership is unclear. Scytl owns Clarity Election Night Reporting which is the “end of the line” for votes, and from which results are reported to Associated Press.

Ramsland was called in to look at the Kentucky vote. The State Board of Elections link went directly to a page operated by Clarity Election Night Reporting (ENR). The page and data is copyright, Scytl.

Kentucky features in the famous live feed from Clarity on CNN. The top data is direct from Clarity. The ticker along the bottom of the screen is updated by CNN with a delay of a few seconds. This exposed that 560 votes went from the Republican Governor to the Democratic challenger — a direct switch of votes.

“This is vote switching going on inside the computer. That is 1,120 votes which is about 25% of the entire loss margin that you just saw happen before your eyes.” — Russ Ramsland.

“If you want to get an unofficial tally of voting, users of the system can download it from Frankfurt. If you are monitoring a vote in Dallas, Texas, for example, that is six time zones to the east (that’s seven hours ahead of Dallas).’

In October 2020, Service Point Solutions, part of Paragon Group of Ireland, said it was buying Scytl.

“Dominion is ready to make a difference in your next election,” it declares on its ‘about’ page which  somewhat bizarrely features an Elvis Presley impersonator.

Dominion is the second largest seller of voting machines in the United States and Canada’s largest election system provider. Perhaps because it’s a relatively young company, you couldn’t find a shorter Wikipedia entry for such a significant company https://en.wikipedia.org/wiki/Dominion_Voting_Systems#Acquisitions

Founded in 2003, or 2000, incorporated in 2009, Dominion Voting was founded by CEO John Poulos and James Hoover. In a letter of 2016, Dominion asserts: Dominion is entirely owned by its employees, who are U.S. and Canadian citizens.

In 1997 ES&S was formed by merging American Information Systems with the Election Services Division of Business Records Corporation. ES&S retained the right to sell and service Optech scanners to existing customers;

In 2009, ES&S acquired Diebold/Premier, but the Department of Justice forced ES&S to sell because the combined company accounted for seventy percent of US voting equipment. Diebold/Premier was thus purportedly “dissolved” and its assets split between ES&S and Dominion Voting.

Election Systems & Software (ES&S) is a subsidiary of McCarthy Group, an investment firm based in Omaha, Nebraska, which manages more than US$1 billion in assets. In 2014, ES&S was the largest manufacturer of voting machines in the United State.

Smartmatic was founded in Caracas, Venezuela, in 1997. It is now owned by Lord Mark Malloch-Brown and registered in the UK. “U.S. Investigates Voting Machines’ Venezuela Ties,” New York Times – Oct. 29, 2006

“Smartmatic was a little-known firm with no experience in voting technology before it was chosen by the Venezuelan authorities to replace the country’s elections machinery ahead of a contentious referendum that confirmed Mr. Chávez as president in August 2004.”

In 2004-05 Smartmatic acquired Sequoia Voting Systems but immediately sold the company on to SVS Holdings for an undisclosed price. Smartmatic’s ownership has become more opaque over time https://en.wikipedia.org/wiki/Smartmatic#Ownership

In 2014, Smartmatic’s CEO Antonio Mugica and British Lord Mark Malloch-Brown announced the launching of the SGO Corporation. They were joined on SGO’s board by Sir Nigel Knowles, Global CEO of DLA Piper in 2014. Emhoff, Kamala Harris’ Spouse, Taking Leave From DLA Piper – The American Lawyer, Aug 2020

Malloch-Brown is connected to George Soros through the Open Society Foundation. https://en.wikipedia.org/wiki/Mark_Malloch_Brown,_Baron_Malloch-Brown#Association_with_George_Soros

Sequoia was identified as the company that had supplied the notorious faulty punch cards during the 2000 election — the very punch cards that led Congress to pass legislation moving the country away from punch cards and toward electronic voting machines.

A 2007 investigative report by Dan Rather charged Sequoia with deliberately supplying poor quality punch-card ballots to Palm Beach County, Florida for the 2000 election.

In 2010, a Canadian company called “Dominion Voting” bought Sequoia and combined its assets with those of Diebold Election Systems, the second largest voting machine vendor in the U.S. (which was renamed “Premier” in 2007.

According to an article on Medium — Election system vendors have close ties to a foreign dictator, a Religious Right group, and a convicted embezzler whose crimes involved computer tampering, by Jenny Cohn: “Diebold entered the voting machine business with its 2002 acquisition of Global Election Systems, a company whose Senior VP (programmer Jeffrey Dean) was a convicted felon who had served time for sophisticated crimes involving “computer tampering.”

See also the observations on the 2020 U.S. presidential election of Russell Ramsland, founder of Allied Security Operations Group on the electronic voting system in https://moneycircus.blogspot.com/2020/11/us-elections-are-bent-and-no-one-cares.htm