SOLEIMANIgate: ISIS Lauds Soleimani Assassination Because They “Will Rise Again” 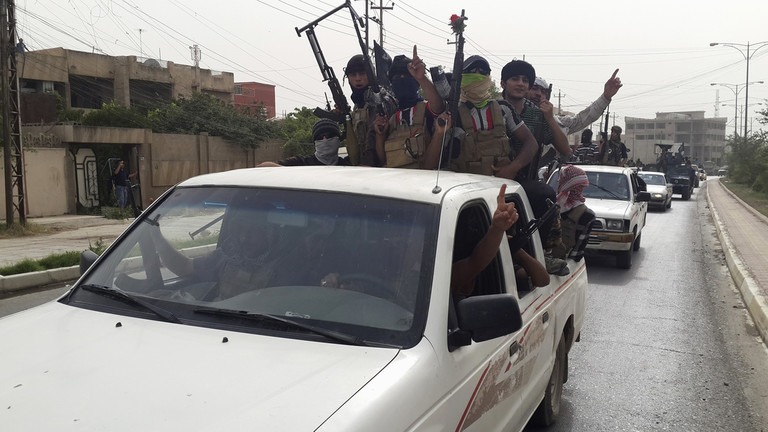 Islamic State terrorists rejoiced at the death of Iranian General Qassem Soleimani at the hands of his American ‘allies,’ according to a weekly newspaper affiliated with the group that once controlled much of Syria and Iraq.

Soleimani was killed by a US drone strike on January 3, as he was being driven, with others, near Baghdad international airport. In reprisal, Iran launched a limited strike on US bases in Iraq with ballistic missiles on Tuesday, causing no casualties but demonstrating a capability to hit US assets at will.

The weekly Islamic State (IS, formerly ISIS/ISIL) newspaper Al-Naba portrayed Soleimani’s death as an act of god in support of its cause, and Muslims in general, according to BBC Monitoring.

Thread: In the editorial of its weekly paper #AlNaba, #ISIS welcomes the death of #Soleimani in a US drone strike, but is careful not to openly credit the US for his demise but portrays it as an act of God to support IS and Muslims more broadly. pic.twitter.com/6bNXiMyOcX

An editorial in the jihadi paper was careful not to credit the US or even mention Soleimani by name. It couched the gloating in a historical analogy, referring to “Roman-Persian wars” that enabled early Muslims to overrun both Persia – today’s Iran – and parts of the Eastern Roman Empire, also known as Byzantium.

The paper also reported on the US and its allies suspending operations against IS as an opportunity for the group’s resurgence, according to BBC journalist Mina Al-Lami.

While IS has not been entirely destroyed, it has not controlled any territory for months. Soleimani’s Quds Force fighters were among those that turned the tide against the IS ‘caliphate,’ alongside the Syrian Army and the Russian expeditionary force in Syria – while the US-backed Iraqi army and Kurdish militias advanced from northern Syria and Iraq.

Citing the possibility IS might reappear, the US is refusing to withdraw from Iraq in open disregard for its ‘partners’ in the government in Baghdad. Iraqi lawmakers passed a nonbinding resolution demanding US withdrawal shortly after Soleimani’s killing, but the US State Department said on Friday that no such thing would be happening.

Both the US and several of its NATO allies have suspended their training of Iraqi security forces for the moment, as they braced for Iranian reprisals. Some allies even pulled their personnel out of Iraq to neighboring Kuwait. However, US President Donald Trump has called for an expanded role for NATO in Iraq.