HERE IS BILL GATES’ INJECTABLE BIOCHIP, FOR THOSE WHO THINK IT IS CONSPIRACY THEORY

A Silicon Valley company with early funding from the Bill and Melinda Gates Foundation, as well as the US Department of Defense’s highly secretive Defense Advanced Research Projects Agency, is expecting approval of an injectable, permanent under-the-skin biochip sensor made of advanced hydrogel material sometime in the spring.

The chip is being touted as a way to detect COVID infections as soon as the body begins to show symptoms.

It has been known since the end of May, according to the CDC, that COVID is a 99.8% survival rate virus, similar to flu, which is 99.9%.    While it is true that severe cases of COVID can have serious after-effects, this is true of any serious case of a respiratory disease, including flu.

Defense One, a defense industry trade website, writes in “A Military-Funded Biosensor Could Be the Future of Pandemic Detection.”

“Why are pandemics so hard to stop? Often it’s because the disease moves faster than people can be tested for it. The Defense Department is helping to fund a new study to determine whether an under-the-skin biosensor can help trackers keep up — by detecting flu-like infections even before their symptoms begin to show. Its maker, Profusa, says the sensor is on track to try for FDA approval by early next year.”

According to a Profusa press release the biosensor is:

Inserted under the skin with a syringe, the string includes a specially engineered molecule that sends a fluorescent signal outside of the body when the body begins to fight an infection. The other part is an electronic component attached to the skin. It sends light through the skin, detects the fluorescent signal and generates another signal that the wearer can send to a doctor, website, etc. It’s like a blood lab on the skin…”

Once implanted the chip is permanent, fusing with living tissue and blood vessels:

“Smaller than a grain of rice, each biosensor is a flexible fiber about 5 mm long and half a millimeter wide, comprised of a porous scaffold that induces capillary and cellular ingrowth from surrounding tissue…The data is relayed to a smart phone for an encrypted personal record and historical tracking. Data can be shared securely via digital networks with healthcare providers.”

“is on track to try for FDA approval by early next year.”

Critics of the technology, such as Dr. Carrie Madej, assert that the chip represents a total control platform which links humans to an artificial intelligence network, which can track and read every facet of a person’s life, including mood, fear, anxiety, even level of sexual activity, by detecting and reading the body’s complex chemistry at all times.

Research funding for Profusa biochip by the Bill and Melinda Gates Foundation, from 2012 to 2016, can be seen at a University of California at San Francisco Global Research Projects website, BELOW. 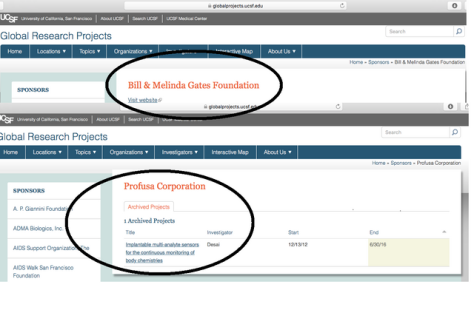 The pubic record now shows that Bill Gates gave nearly $8 million to Imperial College’s Professor Neil Ferguson, author of the now discredited report which forecast over 2 million dead in the US if it did not lock down and implement mask laws.   The report became the basis, cited by Dr. Anthony Fauci and other international health officials, for the present lockdowns.  The report is entitled “Report 9 – Impact of non-pharmaceutical interventions (NPIs) to reduce COVID-19 mortality and healthcare demand”

Because the country of Sweden decided it would not lock down, and never closed bars, restaurants, most schools, sports, or other businesses, Ferguson’s report forecast Sweden’s COVID death count would be 100,000 by June. It is presently under 6,000, with the rate steadily declining.  Sweden now has a far lower death rate than the US, Italy, Spain, UK, and Belgium, countries which engaged in devastating lockdowns.

The website MedicalXpress.com reported in “Sweden bucks trend in refusing to recommend masks”:

While most of the world has come to terms with covering their noses and mouths in crowded places, people in Sweden are going without, riding buses and metros, shopping for food, and going to school maskless, with only a few rare souls covering up…Sweden never closed its schools, businesses or cafes and restaurants, allowing the virus to circulate, and has therefore had a consistently high level of community transmission.

Below: COVID Deaths per Million in Population, as of October 13, Sweden lower than US The National Review reports on Ferguson:

Johan Giesecke, the former chief scientist for the European Center for Disease Control and Prevention, has called Ferguson’s model “the most influential scientific paper” in memory. He also says it was, sadly, “one of the most wrong.”

“I’m normally reluctant to say this about a scientist, but he dances on the edge of being a publicity-seeking charlatan.”

One of Ferguson’s fiercest critics, a former Chief Science Officer and VP for the pharmaceutical giant Pfizer, Dr. Mike Yeadon, told an interviewer:

“It’s important that you know most scientists don’t accept that it [Ferguson’s model] was even faintly right…but the government is still wedded to the model.”

A Mandatory Biochip Can Work Hand-in-Hand with Other Gates-Backed Technologies.

Despite efforts to paint critics of Gates as “conspiracy theorists,” the public record and his own statements cannot be escaped.  Gates has worked hard to swat away talk of simpler remedies for COVID such as hydroxychloroquine, backed by scientist-doctors such as Yale’s Dr. Harvey Risch, and insisted that a ramped-up, worldwide system of vaccinations are the future.

The Gates Foundation has funded the initiative the  “Decade ofVaccines,” One of the talents tapped by Gates to drive the initiative is Dr. Anthony Fauci.

Although Gates is a college drop-out and does not hold any medical or science degree of any kind, he has called his opponent on lockdowns, White House Coronavirus Advisor Dr. Scott Atlas, a “pseudo-expert.”  Atlas is an MD and a Stanford professor.

A Gates pet project is the assigning of digital identification records to almost every human being, for which his enthusiasm was made clear in his remark:

“eventually there will be sort of this digital immunity proof that will help facilitate the global re-opening up.”

The Gates-backed ID2020 Alliance markets the idea as necessary for disadvantaged Third World families to obtain proper “services.”  It is but a half-step to combine all medical, financial, and personal records with a permanent chip implant.

Gates’s Microsoft has taken an early lead in patents and research which would actually be able to “mine” bits of digital currency from people linked to an artificial intelligence platform connected by 5G.

Such a “conspiracy” source as PC Magazine writes:

the human user would need to have a sensor attached to, or installed in, their body. Microsoft envisages users being rewarded for allowing their bodies to be monitored in this way by paying them in cryptocurrency for performing specific tasks.

As well as brain waves and heat, the patent also suggests using “body fluid flow” and “organ activity and movement” to track a range of tasks…

If one can be “rewarded” for good behaviors, can one be punished for those behaviors the machine deems “bad?” The nephew of the slain president, environmental lawyer and activist Robert F. Kennedy Jr. says the human race has good reason to be alarmed.

Perhaps being at a beach during a lockdown period will be noticed by your tracker, since physical location 24/7 will be among the easiest things to see. Once fined by authorities for breaking lockdown or curfew, the sum could simply be automatically subtracted from your “digital wallet.”

Kennedy spoke recently at a massive anti-totalitarianism demonstration in Berlin.

Ancillary to biochips monitored and controlled by AI is the rapid development of in-body nanoparticles, which are already being seriously aimed at producing “super-soldiers.” Although in the history of experimenting on soldiers, the well-being of the actual soldier has never been a consideration.

Although science websites tout the possible beneficial uses of nanoparticle technology in the body, such as fighting cancer (rather than clean up the environment of cancer-causing toxins,) science thinkers such as Adam Keiper, Senior Editor of The New Atlantis, write that:

Nanotechnology could theoretically be used to make mind-control systems, invisible and mobile eavesdropping devices, or unimaginably horrific tools of torture.

As RFK Jr. says: “It would be the end of dissent.”

A group of wealthy investors led by Bill Gates have plans to blanket the globe with real-time satellite surveillance, openly admitted in publications like Newsweek. There could literally be nowhere to run, nowhere to hide. With the use of facial recognition technology already deployed in China, all privacy and freedom of movement will be gone.

Newsweek: “Bill Gates and Other Rich Investors Want to Watch Over Earth from Space”

“Will Big Brother be something out of this world? A company called EarthNow, whose investors include Bill Gates, tech mogul Greg Wyler and companies like Airbus and SoftBank Group, announced this week that it has plans to launch a “large constellation of advanced imaging satellites” to provide real-time images of “almost anywhere on Earth.””

Is It Really All About Gates?

It would be absurd to say that Gates is a single madman who wants to rule the world. Others within his elite with similar power could stop him if they wanted to.

It would be more reasonable to say he is a front man of sorts. Acting with the approval of key members of his class.

The world’s big banks cater heavily to the small number of the world’s richest people. According to a report from investment bank Credit Suisse, in 2017 the top 1 percent of global citizens own 50.1 percent of all household wealth, up from 45.5 percent in 2000.

Elon Musk, who has spoken against lockdowns, has said that he and his family will not be getting any COVID vaccine even if available.

Gates is an imperfect frontman, as he certainly has blood on his hands.  In India, a committee of investigation found that thousands of girls, whose families were illiterate, were maimed by his vaccine trials.

“The committee found that…In many other cases, thumbprint impressions of their poor and illiterate parents were duly affixed onto the consent form. The children also had no idea about the nature of the disease or the vaccine.”

Neither the girls nor their families could read nor write, and their thumbprints were used as signatures for consent for vaccine trials they did not understand. This was in violation of principles established at the Nuremberg Trials, following the trial of the Nazi doctor Josef Mengele, that no experiments could be conducted on a person without their fully informed consent. Seven of the 23 defendants for illegal experiments were sentenced to death.

Gates could be prosecuted on these ground alone, by any duly sworn prosecutor in any nation that is signatory to the Geneva Conventions.

There is already one lawsuit underway, in Belgium, which names Gates and Ferguson as defendants in a scheme to defraud the public by the criminal exploitation of the COVID crisis.

For his part, another name who has played a prominent role in pushing the narrative of masks, lockdowns, and social distancing, Dr. Anthony Fauci, was the subject of what should have been an earth-shaking report in the mainstream Newsweek.  The report details, minutely, Dr. Fauci’s role in controversially granting funding of over $7 million to Wuhan Lab in China, for bat coronavirus research which was considered so dangerous it was banned in the US.  (Newsweek: “Dr. Fauci Backed Controversial Wuhan Lab with U.S. Dollars for Risky Coronavirus Research”)

Gates’ reach is impressive, but difficult to hide in an as-yet free society.  Recently Fauci and others have been reciting that if only everyone in the nation wore masks consistently, 130,000 lives could be saved, saying nothing about the extensive science suggesting hydroxychloroquine protocols are effective.   It turns out the study which makes this conclusion on masks comes out of the University of Washington’s Institute for Health Metrics and Evaluation, which is heavily funded by Bill Gates.

Below: No mask, no lockdown Sweden