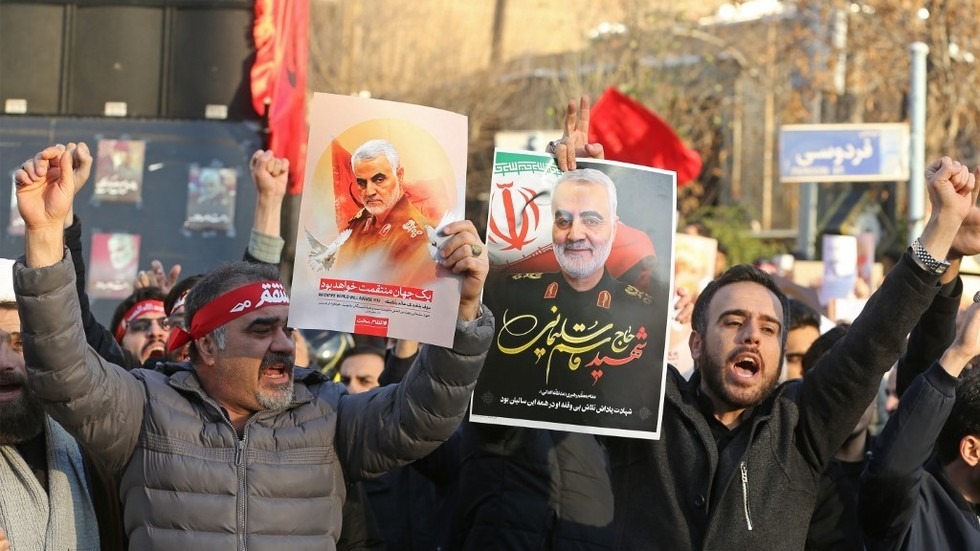 Trump defends killing of Soleimani regardless of ‘imminent’ threat, says he had a ‘horrible past’

US President Donald Trump has lashed out against the “fake news media” and their “Democrat partners” over criticism of his administration’s decision to assassinate Iranian general Qassem Soleimani.

The president claimed in tweets marred with misspellings that it does not matter if Soleimani presented an imminent threat to the US, something he had said previously to defend the assassination, because of the general’s “horrible past.”

The Fake News Media and their Democrat Partners are working hard to determine whether or not the future attack by terrorist Soleimani was “imminent” or not, & was my team in agreement. The answer to both is a strong YES., but it doesn’t really matter because of his horrible past!

Trump also accused the media of trying to portray “terrorist Soleimani” as a “wonderful guy.”

Though the president has claimed the January 3 assassination of Soleimani was due to the general planning attacks against US forces and embassies, his own defense secretary admitted on Sunday that he “didn’t see” any specific evidence to suggest those attacks were imminent.

ALSO ON RT.COMTrump’s defense secretary admits he ‘didn’t see’ evidence about Soleimani planning attacks against US embassiesSecretary of State Mike Pompeo also struggled in a recent press conference to define the “imminent” threat Soleimani presented to the US. He claimed the US “got it right” with their decision to kill the general.

A reporter just asked Pompeo if he can provide specific evidence of the imminent threat that led to Soleimani’s assassination.

And he has absolutely nothing.

These men want to lie us into war, again.

Huge crowds of Iranians took to the streets in the aftermath of the general’s death to protest the killing, and his funeral drew an enormous procession.

Tehran targeted military sites in Iraq housing US forces in retaliation for the assassination. No American casualties were reported in what was believed to be a show of force by the Iranian authorities.