Reported by Wikipedia 1/15/2020: “On 19 January 2017, a fire started on the ninth floor at around 07:50 local time (04:20 GMT).[10] The building was occupied at the time by its residents, workers at the garment shops, and various tour groups that were being shown around the building.[2] Ten fire brigades arrived to fight the blaze. The combined brigades had been trying to stop the fire for hours—while assuring that the building had been evacuated—when the building’s north wall collapsed without warning, leading to the collapse of the rest of the building a few moments later.”  [1/19/2017 = 911 in reverse] 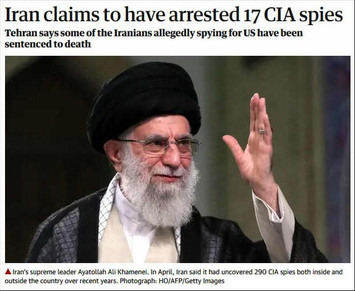 ~
(Guardian) 7/22/2019 Iran Claims to Have Arrested 17 CIA Spies – Tehran says some of the Iranians allegedly spying for US have been sentenced to death.

As evidenced by the July, 2019 article above, it appears the highest levels of the Iranian government have long been infiltrated by CIA/Israeli agents.

We only need to remember that the USA was infiltrated by Israeli spies and neocons prior to 9/11.  A silent takeover of high levels of the Iranian government is consistent with what happened in America.  The CIA/Israeli coup in Iran is manifest in the deliberate demolition of Tehran’s PLASCO building.

When official notice of probable controlled demolition was offered to IRAN, their official response disingenuously claimed that the AE911Truth group was considered a “conspiracy” group.  This response from Iranian officials was completely out of character for international diplomacy to a civilian group.  The accusation that AE911Truth was a  “conspiracy” group would not likely originate from an Iranian national but from a CIA/Mossad agent who had infiltrated the Iranian government. 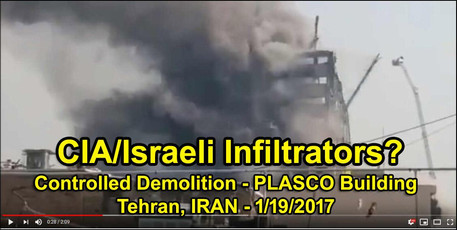 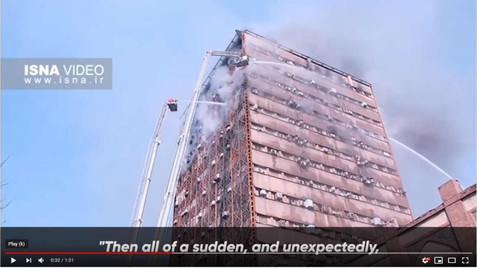 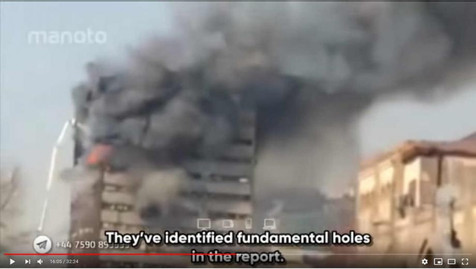 The focus of Weinberg’s article was the response of Architects & Engineers for 9/11 Truth (AE911Truth) — the organization I work for — to the destruction of Tehran’s first-ever, iconic high-rise. At around 8:00 AM that day, the upper floors caught fire and burned for a little over three hours before a series of explosions rocked the building. The structure then completely collapsed to the ground, tragically claiming the lives of sixteen firefighters and six civilians.

The day after, we issued a statement, based on our analysis of the available videos, urging the Iranian government to investigate the possible use of explosives. One month later, after compiling more evidence, we published a report recommending that investigators consider explosives and incendiaries as the primary hypothesis for the building’s destruction. Our purpose was “to help the people of Iran in their effort to understand the cause of this tragic incident.” (Continue)

(Millennium Report) DID ISRAEL PULL OFF ANOTHER 9/11-TYPE DEMOLITION IN IRAN?
Plasco Building Demolition Evidence of Israel’s Control of Iran?

VIDEO: On 1/19/2017 sixteen fire-fighters and six civilians were killed in the tragic destruction of Iran’s iconic and Jewish-owned, Plasco Building. We honor their memory by calling for a truly independent investigation into this incident, which has received little attention outside of Iran. (Gematria – 1/19 = 9/11)

It’s my opinion that high levels of Iranian government have been infiltrated by Israeli agents. We have evidence of this in the controlled demolition of the PLASCO building where IRAN “officials” claimed that the AE911Truth members trying to warn IRAN were rebuffed as a “conspiracy theory” group. This type comment would most likely come from an Israli infiltrator…not a true Iranian national. Remember that the Jewish population in Iran is the highest in the middle-east other than Israel with potential infiltrators in government posts. Among other outcomes and false flag opportunities, this deception will be the most likely source of the demise of the Islamic Dome in a contrived war where Israel orchestrates both sides of a war to destroy the dome.

END-TIMES PROPHESY GAME OF THRONES
(VIDEO Adam Green)  HBO, Game of Thrones, & End Times Prophecy
Israel already controls IRAN. We saw this in the controlled demolition of the PLASCO building where fake IRAN officials claimed the AE911Truth members trying to warn IRAN were rebuffed as a “conspiracy theory” group. This type comment would most likely come from an Israeli infiltrator…not a true Iranian national. This deception will be the most likely source of the demise of the Islamic Dome in a contrived war where Israel orchestrates both sides of a war to destroy the dome.

IRAN’S 9/11 HAS ALREADY HAPPENED – WHY DID IRANIAN AUTHORITIES COVERUP THE CONTROLLED DEMOLITION?

ISRAELI SILENT COUP in IRAN? – Tehran’s Plasco Building Collapse is evidence that Israeli interests have seized control of IRAN’s State media and probably more. Why? — Like Larry Silverstein’s skyscraper, the Plasco Building collapse is remeniscent of the WTC-7 controlled demolition collapse on 9/11/2001. This Plasco event is a defacto “announcement” that a major Iranian power shift is underway. IRAN has the largest population of Jews in the Middle East outside of Israel. Moreover, the Plasco building was erected in the early 60s by Iranian Jewish businessman Habib Elghanian and named after his plastics manufacturing company.

PLASCO BUILDING CONTROLLED DEMOLITION: At approximately 11:30 AM local time on January 19, 2017, in Tehran, an iconic 17-story high-rise known as the Plasco Building tragically collapsed after being on fire for some 3 ½ hours. Early reports say that anywhere from 20 to 50 were killed. The BBC reported that the fires were nearly extinguished — and that emergency personnel and occupants had begun reentering the building — when the collapse unexpectedly occurred. — http://www.euronews.com/2017/01/20/iran-rescue-work-continues-into-night-after-tehran-building-collapse AE911Truth will be releasing a statement on this matter on January 20.

The Jewish population numbers in Iran are the highest in the middle-east other than Israel, with a high potential for CIA/Mossad infiltrators in high government posts.

Among other false flag opportunities, this deception will be the most likely source of the demise of the Islamic Dome of the Rock in a contrived war where Israel orchestrates both sides to destroy the Islamic Dome – perhaps by controlled demolition disguised as a bomb or missile, in order to make way for the third Temple prophecy.
https://www.asiatimes.com/2019/05/article/saudis-flag-pipeline-interruption-tanker-damage/