Like everyone in the field, I am actively following the discovery of a novel human coronavirus in Wuhan that has sickened close to 200 people, killed three, and been exported to three countries. In the last few days, case counts have substantially increased as public health authorities in Wuhan are scouring cases of pneumonia and finding some proportion are positive for the novel virus. Such events — especially the rapid uncovering of cases without links to the market — have caused even more comparisons to SARS to be made. Despite initial reports seemed to have the virus confined to a live seafood market, the discovery of cases with no link to that market argues that at least some level of human-to-human transmission may be occurring (with the caveat that healthcare workers are not being infected).

One hypothesis I am entertaining — and it is a hypothesis that may be quickly overturned — is that perhaps this coronavirus is following a pattern similar to another post-SARS discovered coronavirus: HKU1. The HKU1 discovery story is one that I find is not well known or appreciated so I wanted to explore it in order to put the novel coronavirus into context. 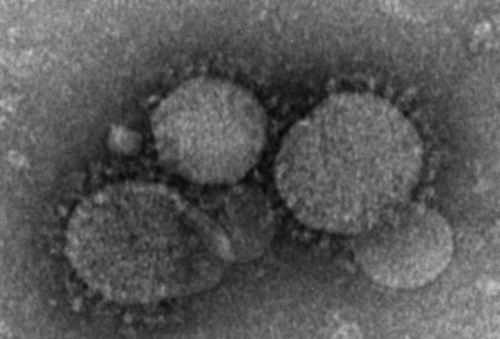 In 2003, after SARS exploded what we knew about coronaviruses — that they were chiefly causes of the common cold and rarely caused severe infection — there were efforts to understand more about coronaviruses and as part of that effort viral discovery efforts were undertaken to uncover new coronaviruses that were causing human infections. Shortly thereafter two novel coronaviruses were isolated from humans, one of which (HKU-1) was a betacoronavirus, the same subgroup that includes among its members MERS and SARS. The first diagnosis of HKU-1 (in 2004) was found in Hong Kong in a 71 year old man who traveled from mainland China and developed a radiographically confirmed pneumonia requiring hospitalization. After this discovery, nasopharyngeal samples from the SARS-era were retrospectively tested for HKU1 and one (from March 2003) returned positive. In the US, specimens from 2001-2002 were also found to contain this virus as well. These findings demonstrated that HKU-1 had been spreading in the global community for at least several months (alongside SARS), unbeknownst to everyone. HKU1 has subsequently found to be circulating all over the world.

After this discovery, HKU1 was the subject of several important studies. One of these, a retrospective and prospective study conducted in Hong Kong is very interesting. In this study, nasopharyngeal samples obtained between March 22, 2003 (the start of SARS cases in Hong Kong) and March of 2004 collected from community acquired pneumonia cases that were SARS negative were screened for the presence of HKU1. Strikingly, HKU1 was found to account for 2.4% of the community acquired pneumonias during that period. If HKU1 was such a common cause of community acquired pneumonia, it clearly had been widespread despite only being “discovered” in 2004. I suspect the number would have been even more substantial if upper respiratory tract infections were included as well.

Another important study, conducted in the US city of Cleveland in 2016, tested over 1000 respiratory samples from patients in all settings (inpatient and outpatient) and found 1.8% to be positive for the novel HKU1 with 54% of cases hospitalized and 29% requiring intensive care unit admission — the standard indicator of critical illness. So, not only was HKU1 a newly discovered coronavirus but it was also widespread and capable of causing critical illness — again something that no one had appreciated.

Trying to integrate the story of HKU1 with the novel virus in Wuhan, I wonder if this virus will subsequently be shown to be part of the coronavirus repertoire that was just unidentified. Pneumonia cases are not always diagnosed to the specific microbiologic level and many go undiagnosed, including those requiring ICU care.

I don’t what happened in December at that market to bring this virus to light. Was it a big animal spillover? Was it a focal point of transmission from an animal species? Was it the site of a superspreading event? These are all important question that remain desperately unanswered. I wonder, thought, could whatever occurred at the market be an indicator that this virus was already present in human populations at some level — like HKU1 — and only coming to light with the aid of this concentrated outbreak? Phylogenetic analysis seems to indicated that, based on the lack of genetic diversity seen in the limited number of sequences that are available, this was a recent event. However, doing serological surveys for specific antibodies would really help determine the extent of spread as would testing older samples from unexplained pneumonia cases (as was done with HKU1).

This is not to minimize the events in Wuhan but to provide some context for how difficult the first stages of an outbreak investigation may be and how understanding the historical context of related viruses may help understand the emergence of a novel member of the family. I also wonder how many coronaviruses (as well as other viruses and other microorganisms) circulate surreptitiously because of lack of diagnostic capacity and lack of diagnostic curiosity.

Now that advanced technologies exist, illuminating the biological dark matter that exists in every hospital (whether in Cleveland or in Wuhan) in cases of sepsis, pneumonia, meningitis, and encephalitis in which a specific microbiologic diagnosis has not been made is a task I believe should be a priority not only for patient care but for pandemic preparedness.