Four Israelis from an ultra-Orthodox town have been arrested over allegedly setting a bus ablaze, police said Monday, after officers clashed with residents while trying to enforce coronavirus regulations.

The unrest came amid mounting criticism of authorities for failing to impose the rules in religious areas such as Bnei Brak, close to Tel Aviv, some four weeks into Israel’s third nationwide lockdown. 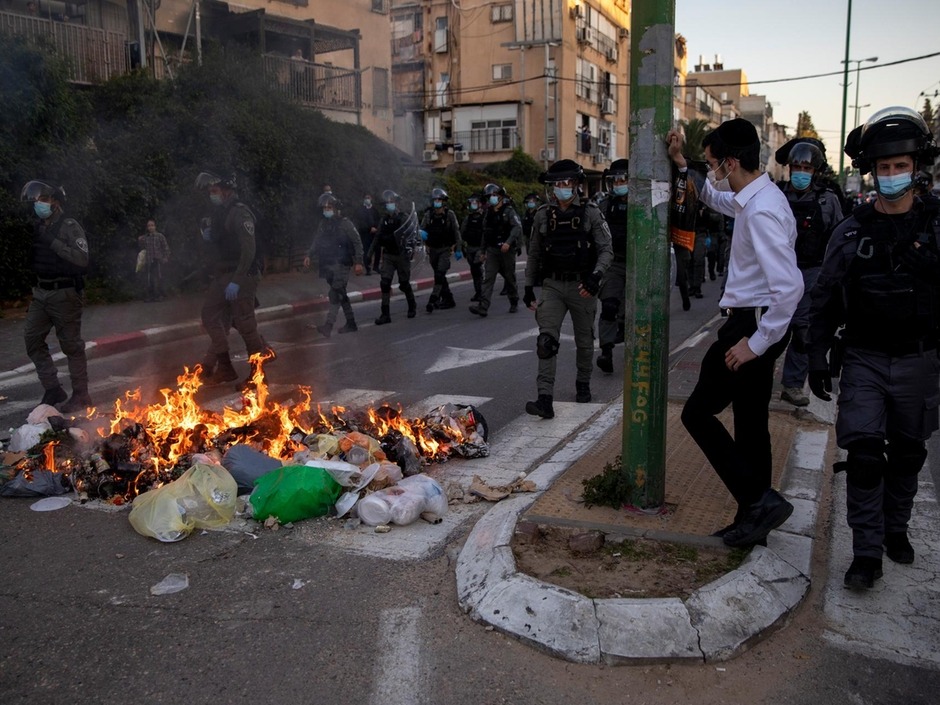 Israeli police officers march by past piles of burning rubbish during clashes with ultra-Orthodox Jews in Bnei Brak, near Tel Aviv, on January 24, 2021. AP Photo

The four people arrested were allegedly involved in “serious disturbances” in Bnei Brak on Sunday, police said, in which a bus was torched in a residential area and the local mayor’s car was attacked.

Earlier on the same day police officers “feared for their lives” when they were surrounded by residents throwing stones at them, prompting one officer to fire in the air, according to a police statement.

The unrest followed reports that some ultra-Orthodox schools had reopened in Bnei Brak, in defiance of the lockdown rules.

Defence Minister Benny Gantz said he had asked the attorney general for legal advice on pursuing local leaders who instruct people to break the rules, while pressing the education ministry to cut funding to such educational institutions.

“We are losing lives because of a politically motivated lack of enforcement,” he said during a cabinet meeting on Sunday.

Coronavirus has killed more than 4,400 people in Israel, out of a population of nine million.

About 21 per cent of coronavirus tests in Bnei Brak are positive, according to health ministry data, more than double the national average of 9.3 per cent.

Earlier this month Prime Minister Benjamin Netanyahu condemned a “scandalous wedding” in the town, which went ahead despite the lockdown. The premier said the event amounted to “bloodshed” and called on police to treat rule-breakers “with an iron fist”.

But Mr Netanyahu’s critics argue such statements have not been followed by action, claiming the premier does not want to lose the support of his ultra-Orthodox coalition partners in the March election.

Despite coming under attack in Bnei Brak, Mayor Abraham Rubinstein said the police were to blame “for the catastrophe taking place in our city”. Quoted by The Times of Israel, he accused officers of “provocative activity”.

President Reuven Rivlin has meanwhile urged officers to enforce government measures while treating the public with patience and compassion.

“Decisive action is required on one hand, and tolerance and patience on the other,” he said in a meeting on Sunday with the country’s police commissioner. “These are not easy times; public spirit is high and the police are in the middle.”