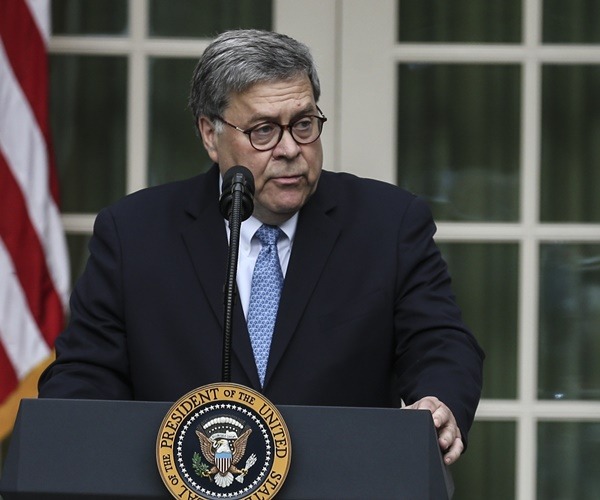 President Donald Trump accompanied by Commerce Secretary Wilbur Ross and Attorney General Bill Barr, announces his administration’s effort to gain citizenship data during the 2020 census at an event in the Rose Garden of the White House on July 11, 2019 in Washington, DC. (Photo by Oliver Contreras/SIPA USA)(Sipa via AP Images)

The Justice Department’s inspector general Michael Horowitz is due to release his long-awaited findings in a week on the FBI’s Russia investigation, though Attorney General William Barr says he rejects one of Horowitz’s key findings, reports The Washington Post.

Barr’s issue with the report is said to center on Horowitz’s conclusion that the FBI had enough information to open an investigation into Trump campaign members in July 2016.

“Barr has not been swayed by Horowitz’s rationale for concluding the FBI had sufficient basis to open an investigation on July 31, 2016,” sources told the Post.

The IG operates independently of DOJ leadership, so Barr cannot order changes to the report.

Horowitz is expected to allege that a former FBI lawyer altered a document related to the surveillance of former Trump campaign aide Carter Page, though he will say the lawyer’s conduct did not change the legal basis for the request to wiretap him.

The report is expected to be sharply critical of the FBI but The New York Times reported Friday that the IG is not expected to conclude that top FBI leaders acted out of bias.

The review is set for release on Dec. 9. Horowitz is scheduled to testify about his findings before the Senate Judiciary Committee on Dec. 11.