It’s way too early for the Alt Media to call this developing pandemic a hoax.

The swine flu and other stuff did not materialize, so people are skeptical this time. To do away with that skepticism, they are doubling down with actions they have never taken before. Due to the obvious hoaxing going on that got parroted by MSM, I am going to call this one as I see it, and it is DOOM.

I think there is a fair possibility the Chinese government is at least being honest with this, but what they are saying is being tainted by hoaxers on an adrenaline run of clickbait. Some of the click bait, and captures from doom videos are below, totally debunked (You’ll have to scroll past the winter time double post) but it is all down this page. Anyway –

Perhaps the Chinese government really is doing the lockdowns. If so, it appears to be an over-reaction, unless there’s something we don’t know about because after all there really is a level 4 biolab in Wuhan. Whatever this is, it is probably not natural. To keep this all simple, here’s a short summary:

1. In 2015, Bill Gates filed a patent (which is further down this page) on a GMO modified coronavirus.

2. Three months ago, during a conference where he was preaching the virtues of population reduction via vaccines, Gates did a hypothetical model where the coronavirus kills 65 million people. That’s a stretch for coronavirus, which is simply the common cold, But then again, there is that patent. And at that conference, he preached the virtues of using vaccines to reduce the population.

3.It appears there was an outbreak of sorts in China, but the Chinese government is quoting very low numbers and only a few dead, while obvious hoaxers on Twitter are posting videos from all times of the year claiming they just happened and saying thousands are dying because there are dead people laying everywhere. However, every major city has that many people laying in the streets daily due to either bike accidents or car accidents or passing out from strokes – Wuhan has a population of 11 million, there would therefore, by statistic, be multiple videos of people laying in the streets for various reasons daily. You’ll get that many from gunshots alone in Chicago in one day. So there’s plenty of hoax fodder, quite well proven by the fact the hoaxers did not get the time of year right, they just used whatever looked good.

4. BIG PROBLEM – Britain is running with this, and doing quarantines. And if they are taking it that far there’s little doubt it is going to be done in the U.S. also.

5. BIGGER PROBLEM: Gates has the vaccine ready to go already.

Here is the end game, as I see it:

There is a strong possibility that this virus, hoax or real, is going to be used for a martial law style crack down in various nations, including the United States. If this happens in the United States, it could be used as a pretext for even heavier crack downs, complete with gun grabs and forced “vaccinations” – For a virus Bill Gates has patents on, PLUS the vaccine for, while he babbled all about how vaccines should be used for population reduction.

Bill Gates probably contracted out to China for his virus bullshit, why hire Americans to do it? Americans cost more, may have loyalties get in the way, and might speak up. They might speak up in China also, but there’s that language barrier, and the guns and Trump problem is in the U.S. There’s no doubt China’s government hates Trump, and that’s definitely playing into this scenario as it unfolds as well.

I can’t say a gun grab and forced “vaccination” is going to happen yet because it is too early to know, but it is sure shaping up in a very bad way.

PRECEDENT: Sandy Hook: – If they could stage such an event in a school that had been closed for 4 years and ram it down America’s throat through a rigged MSM they can certainly do a virus scam and have nothing at all be real, Britain does not even need to put quarantines in place, none of it has to be real, the MSM can wag the entire damn thing and there will be no way for the public to know if any of it is real or not. But you can bet martial law in the U.S. will be real if they take this that far, while the reason behind it is entirely fake.

So that’s where I am at right now. Needless to say, I am skeptical. 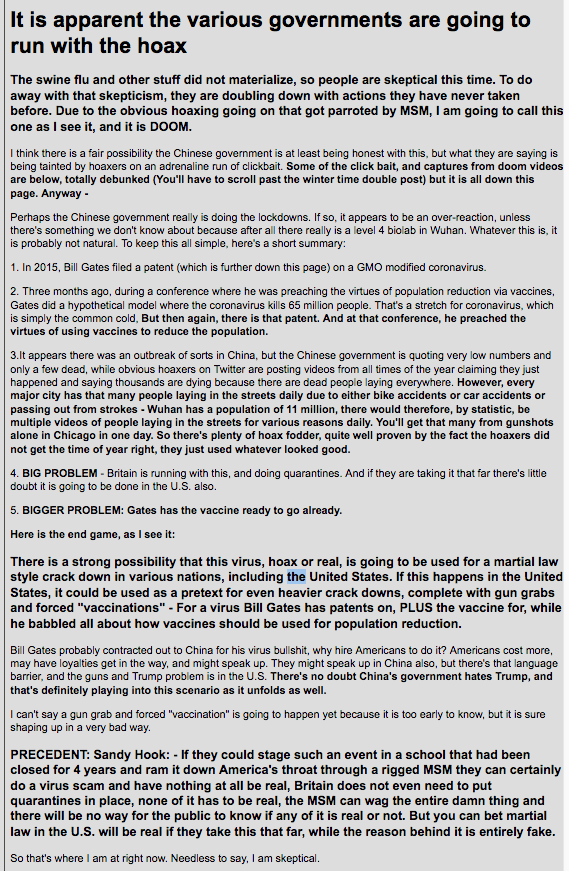