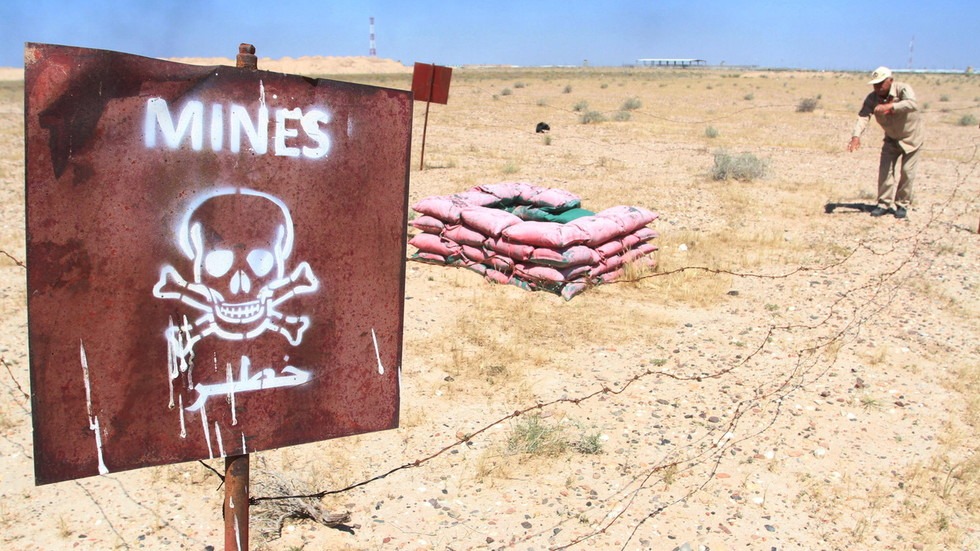 US President Donald Trump has overturned an order banning landmines passed by his predecessor, Barack Obama, whose mere signature seems to mark even the most benign legislation as a target for presidential wrath.

Trump has reversed a 2014 order that banned the use, production, stockpiling, and transfer of anti-personnel mines, saying that the ban posed an unacceptable risk to US troops, White House Press Secretary Stephanie Grisham announced on Friday.

“Landmines are an important tool that our forces need to have available to them in order to ensure mission success and in order to reduce risk to forces,” Defense Secretary Mark Esper declared in a press conference shortly before the official announcement, acknowledging the need to account for “both the safety of [mine] employment and the safety to civilians and others after a conflict.”

Under the new rules, the US military will be free to use landmines “in exceptional circumstances,” including “future potential conflicts,” according to a State Department cable leaked on Thursday, which was reportedly written to give US diplomats suitable language for explaining the decision to their shocked colleagues. The rule excludes mines lacking a feature that allows them to automatically deactivate or self-destruct after 30 days, the cable specifies.

The move has left even military experts dumbstruck. “The United States has not used landmines in a new theater of military operations for nearly 30 years – since 1991,” Arms Control Association executive director Daryl Kimball told Vox.

And the decision has provoked the ire of peace activists and groups like Amnesty International, which issued a statement condemning the move as “a massive step backwards” and pointing to a 1997 international treaty that banned the munitions. Upwards of 130,000 people have died from landmine injuries since the ban took effect, according to watchdog group Landmine Monitor – most of them civilians.

However, the seemingly self-sabotaging effort to bring back the deadly devices makes perfect sense when seen as part of the continuum of Trump dismantling his hated forebear’s legacy, no matter what the implications for the country.

Trump’s best-known reversal of an Obama-era accomplishment remains his decision to tear up the Iran nuclear deal, ignoring the agreement’s six other country partners, and reimpose harsh sanctions on Iran despite the latter’s total compliance with restrictions on its nuclear development. The president often congratulates himself on ditching “Obama’s terrible Iran deal” at rallies, usually mentioning his nemesis’s decision to give Iran “many billions of dollars, some of it in actual cash” – actually Iranian assets the US had frozen decades ago and never returned. The chasm that Trump’s unprovoked decision to break the deal created between Washington and Tehran arguably set in motion the events culminating in the strike that killed Iranian General Qassem Soleimani earlier this month, and a retaliatory strike that left 50 US soldiers with traumatic brain injuries.

Trump officially pulled the US out of the 2015 Paris climate agreement in November, capping off a series of reversals of Obama-era energy reforms that he disparaged variously as “job-crushing regulations” and a “war on coal.” Even a 2017 rule requiring more energy-efficient lightbulbs was cast aside. Would Trump go so far as to declare climate change a “hoax” if he didn’t have the specter of Obama, fist-bumping Greta Thunberg and pouring hundreds of millions of taxpayer dollars into “green jobs” that never materialized looming over his presidency?

But not every Obama-era rollback is consequential, or even logical. Earlier this month, Trump’s Department of Agriculture partially reversed a series of health standards for public school lunches set by Michelle Obama, allowing schools to cut the amount of vegetables and fruits required while expanding access to high-calorie foods like pizzas, hamburgers and french fries. The move was announced on the former First Lady’s birthday, on the off chance anyone had missed its significance.

Since he launched his 2016 campaign, Trump has presented himself as the antidote to Obama, promising to end the disastrous wars in the Middle East which under the “Hope and Change” candidate’s watch had multiplied from two to seven. Instead of bringing the troops home as he pledged to do, however, Trump has dropped record numbers of bombs in Afghanistan, lobbed missiles at Syria based on an apparently-phony gas attack, and brought the country to the brink of World War 3 by assassinating Iran’s most beloved military commander. As a result, the Iraqi government has ordered foreign troops out, turning the US into an occupying power once more as it refuses to leave, and now Trump is opening the door to even more deadly weapons in the region.

Obama issued his executive order banning land mines in September 2014, boasting that the US would be aligning itself with the Ottawa Convention signed by over 160 countries – but carving out an exception for “the defense of South Korea” that allowed the Pentagon to continue deploying the controversial munitions there, presumably to fend off a North Korean invasion that never came. Is it a coincidence, then, that Trump has made negotiating peace with Pyongyang a centerpiece of his foreign policy?