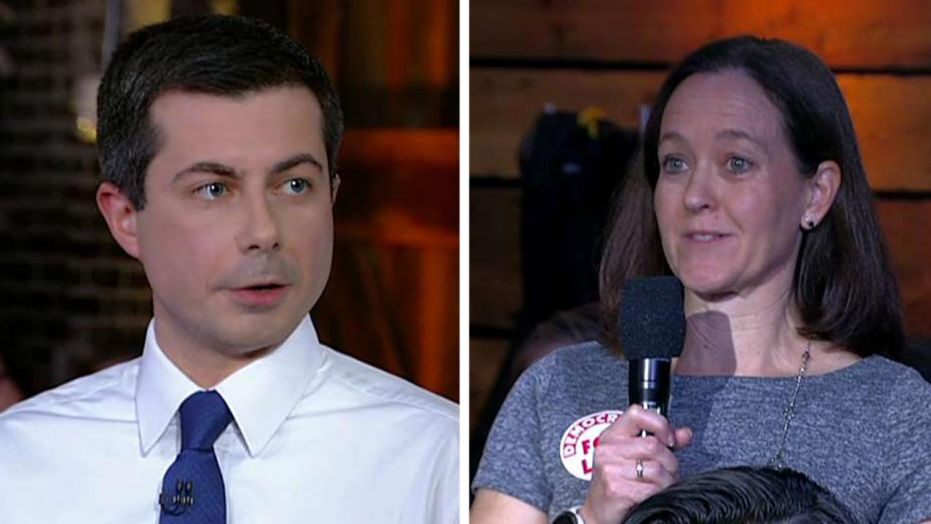 “What if a woman wanted to invoke infanticide after a baby was born — you’d be comfortable with that?” co-host Meghan McCain asked. Buttigieg balked at McCain’s argument.

“We’re talking about families that may have picked out a name — may be assembling a crib — and they learn something excruciating and are faced with this terrible choice — and I don’t know what to tell them morally about what they should do,” he said. “I just know that I trust her and her decision medically or morally isn’t going to be any better because the government is commanding her to do it in a certain way.”

Live Action President Lila Rose blasted Buttigieg: “He said as long as a mother wants to abort a baby, at any age, she should be able to [e]ven if that means partially delivering a full-grown, 7 lb infant, who can recognize her mother’s voice, & then stabbing her neck & suctioning out her brain.”

Rose was referring to the highly controversial practice known as partial-birth abortion.

No, @PeteButtigieg did give a stance

He said as long as a mother wants to abort a baby, at any age, she should be able to

Even if that means partially delivering a full-grown, 7 lb infant, who can recognize her mother’s voice, & then stabbing her neck & suctioning out her brain https://t.co/eXDtNWrg9y

I have ZERO tolerance for Christians who claim to a moral high ground and then can't tell the truth about when life begins and when it should be protected in order to advance their own political career. Go home, Mayor Pete, and save the justice campaign for this #prolifegen. https://t.co/oFyWIq8ONV

Hey @PeteButtigieg, let me help you out. You tell that mother that you are sorry she's received a fatal diagnosis for her child. You tell her you will help her in anyway possible. But you don't tell her that inducing a heart attack on her baby, who can feel pain, is justice. https://t.co/oFyWIq8ONV

Buttigieg’s comments came amid a nationwide battle over legal access to abortion. Officials like Virginia Gov. Ralph Northam have come under fire for statements supporting looser restrictions on the procedure. Northam, in particular, backed the decision to withhold care from infants based on the decision of mothers.

Buttigieg previously faced scrutiny over the issue when Kristen Day, executive director of Democrats for Life, asked him whether there was room in the party for pro-lifers like her. As with McCain, Buttigieg told Day that he thought women should be able to make the decision.

On Thursday, Day said Buttigieg’s comments were “shameful.” “It is shameful to see Democratic Candidates continue to dismiss the humanity of viable preborn babies in the later stages of pregnancy and excuse the practice because it is rare. Tens of thousands of babies’ lives are ended in the later stages of pregnancy and even the Guttmacher Institue admits that most are not for reasons of fetal anomalies,” she told Fox News.

“You would think after our conversation in Des Moines, Mayor Pete would have sought out more information on pro-life Democrats who are a critical constituency in states such as of Indiana that vehemently oppose late-term abortion,” she added.

Social justice begins in the womb.Compassion begins in the womb.The most violent place in US right now is in a mother's womb.I’m extending an open invitation to you to meet any time to talk more about these issues which are near & dear to the large majority of Americans. 3/3

The former mayor’s comments came just weeks after the March for Life, which is the nation’s largest annual pro-life gathering. March for Life President Jeanne Mancini argued that Buttigieg’s comments put him outside of the mainstream in American politics.

Marjorie Dannenfelser, who leads the pro-life Susan B. Anthony List, called Buttigieg “extremely radical” and agreed with McCain’s assessment that his position would hurt him with voters.

this shouldn't be a difficult question for you to answer, @PeteButtigieg.@MeghanMcCain is right. You're extremely radical on late-term abortion & infanticide. This will hurt your campaign. https://t.co/vooIXbvu6y

Democratic voters appear open to restrictions on abortion. According to a Marist poll released Wednesday, 44 percent of Democrats said they were “more likely to vote for” candidates who would limit abortion to the first trimester.

That stands in stark contrast to Democratic leaders’ positions, which Trump and other pro-life advocates warn would allow abortion up until the point of birth. All of the top Democratic presidential candidates have called for a repeal of the Hyde Amendment, a historically bipartisan measure that blocks federal funding for most abortions.