Why has President Trump all of a sudden turned the corner concerning China’s response to the coronavirus outbreak? 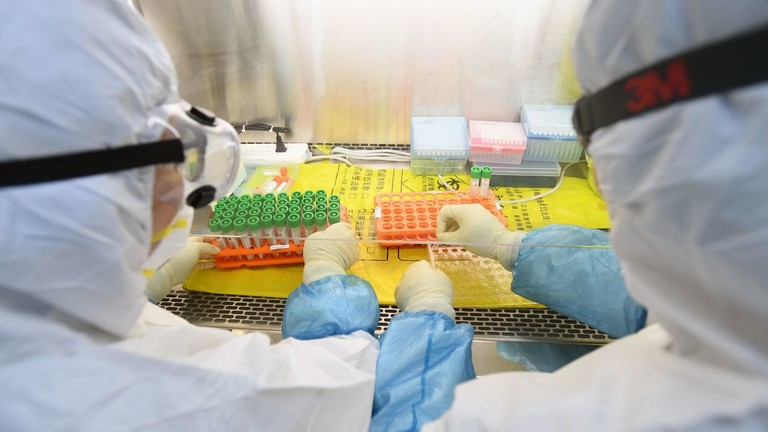 Workers in protective suits examine specimens inside a laboratory following an outbreak of the novel coronavirus in Wuhan. © Reuters / China Daily

The two leaders discussed the outbreak of the virus, which has claimed 640 lives in China, during a phone call on Friday.

That provided the perfect grounds for an attack on Beijing, but Trump, who earlier blasted China for currency manipulation, intellectual property theft, and election meddling, was this time reluctant to take advantage of the dire health crisis in order to attack Beijing.

On the contrary the US president’s evaluation of the Chinese state and leader was a lot more positive; it follows the US-China trade war ending in January with the signing of what he called the “biggest deal there is.”

….he will be successful, especially as the weather starts to warm & the virus hopefully becomes weaker, and then gone. Great discipline is taking place in China, as President Xi strongly leads what will be a very successful operation. We are working closely with China to help!

Xi is “strong, sharp and powerfully focused on leading the counterattack on the coronavirus,” Trump tweeted in the wake of the phone call. He praised China for “great discipline” and “building hospitals in a matter of only days.”

Nothing is easy, but he [Xi] will be successful, especially as the weather starts to warm & the virus hopefully becomes weaker, and then gone.

The US president also said that Washington was “working closely” with Beijing to help the country counter the disease.

Trump’s latest tweets again underline the discord inside his administration as his top officials maintain their harsh anti-Chinese stance despite the trade deal; one week ago US Secretary of State Mike Pompeo labeled the Chinese Communist Party, which is headed by Xi, “the central threat of our times.”

Pompeo’s statement was fully in line with the National Defense Strategy (NDA), which was unveiled by the US Department of Defense two years ago and described China as “predatory,” and a “strategic competitor,” which required “increased and sustained investment” to be kept in check.

China, in turn, consistently blasted Washington for its “Cold War mentality” and “hegemonic logic.” Beijing further accused the US of interfering in its internal affairs by sending ships and warplanes close to its waters in the Pacific, as well as supporting protests in Hong Kong. In late January, it also slammed the travel warning issued by the State Department over the coronavirus outbreak as “truly mean.”