CORONAVIRUSgate: Why did the Pirbright Institute perpetrate such a deliberate deception?

The Wellcome Foundation was licensed to produce vaccines on a “commercial scale” at Pirbright, Woking, Surrey, UK ca. May 03, 1961. 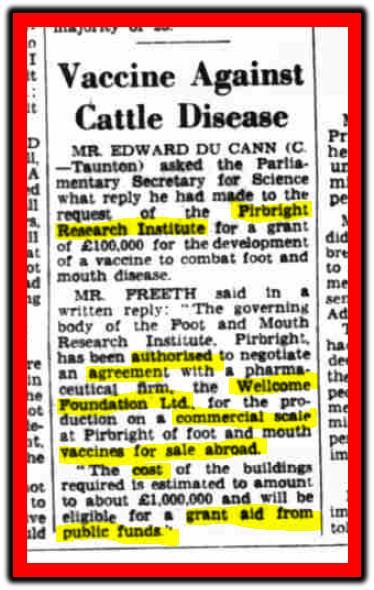 The Pirbright Institute (UK) says it was formed in 1987 originally named  Institute for Animal Health. This is a now evident deception.

Pirbright Institute’s founding dates to before 1961 and is closely affiliated with Wellcome Foundation/Trust, whose vaccine research reaches back to the late 1800’s. See The Evolution of Journalism, 1909. Burroughs Wellcome & Co. (gift to 650 newspapermen at the First Imperial Press Conference, 1909, bankrolled by Harry Wellcome, whose Empire Press Union, 1909 newspapermen created British MI6, MI5 and CG&CS renamed GCHQ in 1946 with the founding of “Five Eyes” (UK, US, CA, NZ, and AU Commonwealth secret intelligence sharing)—wait, the U.S. is sovereign, right? Wrong.

Its own information is remarkably deceptive. In Wikipedia they give two dates: 1987 and 1994 as part of the BBSRC, then there is 1983 as part of SERC (aka Alvey Programme)(founded by Sir Geoffrey E. Pattie) whose bio science activities became BBSRC and its digital technologies activities were commercialized as SERCO, controlled by the Monarch’s Golden Shares. See Spy-gate is directed by the Crown’s courtiers in the UK, not by Russia.

This newly-discovered news article from the Birmingham Daily Post on May, 03, 1961 puts Pirbright’s vaccine actitivie before 1961 and pushes the integral relationship of (Burroughs) Wellcome Foundation/Trust (also GlaxoSmithKline) before 1961. 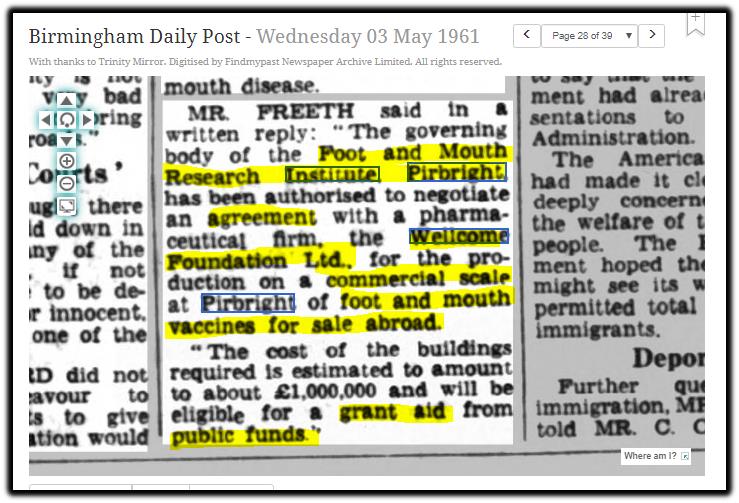 “The cost of the buildings required is estimated to amount to about £1,000,000 and will be eligible for a grant aid from public funds.”