Israel Caught in the Act of Desecrating Palestinian Body (Photo) 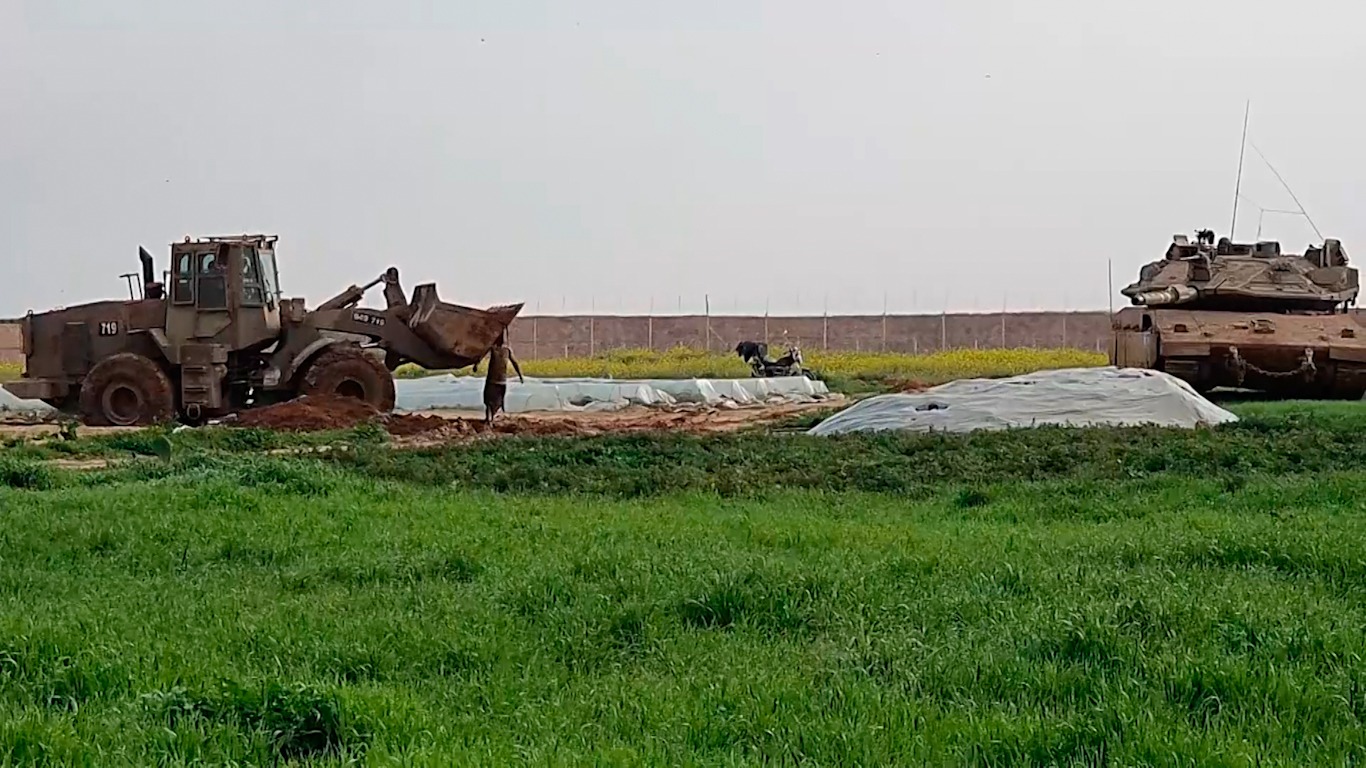 In this frame grab from video, an Israeli military vehicle removes the body of a Palestinian after he was shot and killed by soldiers, along the Gaza-Israel border, Sunday, Feb. 23, 2020. The Israeli military said it shot two Palestinian militants trying to place an explosive device along the border with Gaza, and Palestinian official said one of them was killed. The Hamas militant group accused Israel of abusing the corpse. The incident comes amid a relative lull along the security fence separating Israel from Gaza. (AP Photo)

The Israeli PR machine is making attempts to obfuscate and justify the public desecration of the body of a Palestinian man shot and killed by Israeli forces.

Jerusalem, Palestine — The Israeli public relations machine is once again making attempts to obfuscate and justify the actions of its army along the Gaza fence. The Gaza Strip, which holds two million Palestinians captive without access to clean water, food or medical supplies, is also subjected to ongoing military attacks by the Israeli army. Though it is impossible to judge which of the countless crimes the state of Israel has committed is the cruelest, some stand out more than others. One particularly horrific crime committed on the morning of Sunday, February 23, 2020, was caught on camera. It is an expression of unspeakable cruelty by the Israeli military, which shows total disdain towards the lives and dignity of the Palestinian people.

After clashes near Khan Yunis in the Gaza Strip that left one young Palestinian dead, the Israeli army, likely under orders from the Minister of Defense, a sadistic war criminal by the name of Naftali Bennett, was determined to pick up the body and prevent the slain young man’s friends from taking it with them. The military sent in an Israeli army bulldozer accompanied by a Merkava tank to pick up the body.

The young man’s friends made several attempts to save the body from the bulldozer but were not successful and had to run for fear that they too would be shot and killed. The bulldozer had a difficult time picking up the body and made several attempts, all the while crushing and pushing it back and forth on the sand. When at last the driver was able to pick it up, it had one of the teeth of the bulldozer lift the body by its shirt, the feet dangling in the air, and this was how the body was taken away. Along the way, parts of the lower body were torn off by the bulldozer’s chains.

Though I would not suggest that anyone view this horror show, the video is available and was posted on Twitter and other social media platforms.

In a tweet replying to criticism, the Israeli Defense Minister said he was tired of criticism from the left, that Hamas was holding on to the bodies of Israeli soldiers and he added, “I give my full backing to the army which eliminated the terrorists and took the body.”

It was around 2006 or 2007 during a visit to a friend in Ramallah that I first learned of Israel’s practice of keeping the bodies of slain Palestinians. We were driving together through the city when we saw a parade of cars honking and waving Palestinian and Fateh flags. I asked my friend what this was and he said it looked like a celebration for the release of a prisoner. However, he was puzzled because he hadn’t heard of any prisoner releases that were taking place that day.

My friend went to ask what the celebration was about and when he returned to the car he told me. Israel had just released the body of a slain Palestinian to his family. The body was held for twenty years. It took me a while to digest that information and get over the shock, though one can never quite recover from knowing things like this take place. Mourners carry the bodies of Palestinians teens held by Israeli troops before being released in Hebron, Oct. 30, 2015. Nasser Shiyoukhi | AP

Kibbutz Zikkim sits just a few short miles north of the Gaza Strip on the Mediterranean coast. In fact, much of the land on which the kibbutz sits used to belong to people who are now living as refugees in the Gaza Strip. Last time I was there I went to the kibbutz cemetery, a peaceful plot of land with a beautiful view of the Mediterranean. Along the way, I saw another plot, not far from the cemetery but outside its boundaries. There were little signs with numbers stuck in the ground a few meters apart. When I asked about it, my host pointed out that this area was leased to the army. The army uses it to bury the bodies of Palestinians that it decides to keep, some were taken already dead, others died while in the hand of the Israeli authorities. The cemetery in Zikkim, I later learned, was only one of several such makeshift cemeteries across the country.

Viewing the footage and reading the accounts of what took place, one cannot help but think of the family and friends of 27-year-old Mohammed Al-Naem, hanging from an Israel bulldozer after he was shot dead by Israeli soldiers. Clearly, Israeli authorities see no need for compassion, dignity or respect when it comes to the lives of Palestinians. Brutality is a sign of strength, or so they believe, and the Minister of Defense and his supporters claim with pride that this was a victory.

Mohamad’s mother, Mirvat who saw the images of Mohammed’s lifeless body being carried away by the bulldozer, images that have caused widespread outrage, has demanded its swift return for burial. She spoke about what it was like to see her son killed and then treated in such a horrible manner. His wife, Hiba talked about their son, only one year old, who will grow up without a father. She said she will not watch the video, and one cannot blame her for that decision.

Several images were drawn of the event, and comparisons are being made between the killing and mistreatment of Mohammad and that of Rachel Corry, who was run over and killed by an Israeli bulldozer also in the Gaza Strip.

Feature photo | In this frame grab from video, an Israeli military vehicle removes the body of a Palestinian after he was shot and killed by soldiers, along the Gaza-Israel border, Feb. 23, 2020. Photo | AP

Miko Peled is an author and human rights activist born in Jerusalem. He is the author of “The General’s Son. Journey of an Israeli in Palestine,” and “Injustice, the Story of the Holy Land Foundation Five.”