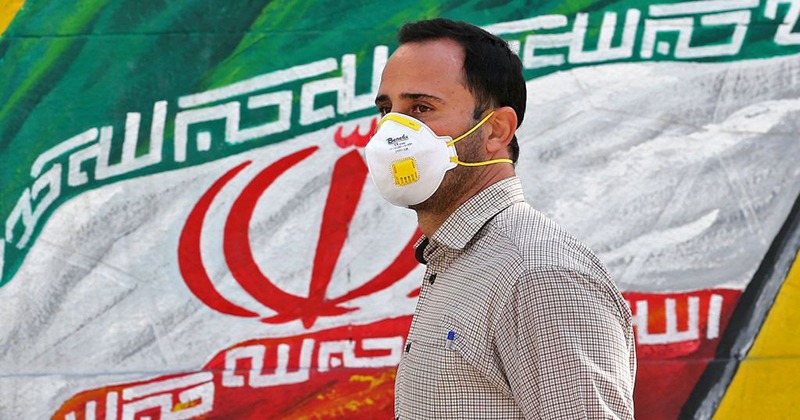 An Iranian man wearing a mask walks past a mural displaying his national flag in Tehran on March 4, 2020. – Iran has scrambled to halt the rapid spread of the COVID-19 virus, shutting schools and universities, suspending major cultural and sporting events, and cutting back on work hours. (Photo by ATTA KENARE / AFP) (Photo by ATTA KENARE/AFP via Getty Images)

Suggests US unleashed virus against China and Iran

An Iranian military leader has suggested that the coronavirus is not a naturally occurring disease, and that it is a manmade bioweapon cultivated and released against China and Iran by a ‘hostile state’.

Brigadier General Gholam Reza Jalali, an Iranian officer in charge of the country’s Civil Defense Organization claimed Tuesday that “A study of the consequences of the virus in terms of tolls or the extent of the epidemic and the type of media propaganda over this issue that is aimed at increasing fear and panic among people strengthens the speculations that a biological attack has been launched against China and Iran with economic goals.”

Strongly hinting that the the virus is a bio-attack by the US, Jalali told Iranian Fars News Agency, state media, that he is seeking “laboratorial investigations and comparing the genome of the primary virus and the new genomes” to confirm his theory.

Iran has been accused of covering up the real extent of the outbreak within its borders. At time of writing it has officially recorded only 92 deaths from 2,922 cases, but those numbers are significantly lower than what independent reports and claims from dissident groups within the country suggest. The real number of deaths is thought to be in the high hundreds or thousands.

Videos uploaded to YouTube by the dissident groups purport to show people collapsing in the streets of Tehran from the effects of the virus, and are reminiscent of previous videos from China.