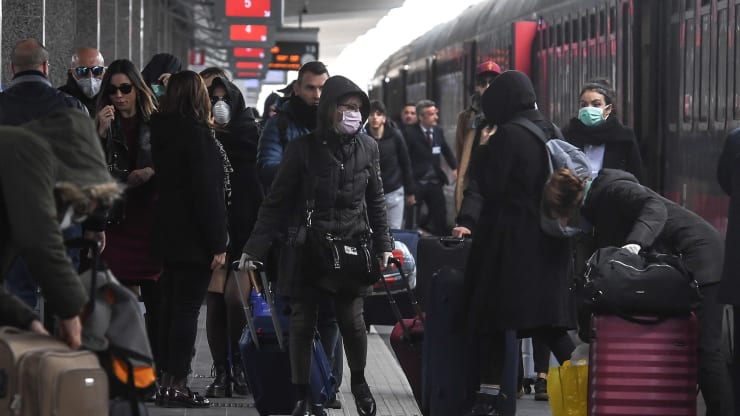 Passengers get off the train arriving from Milan (Milan), at the Garibaldi central station train in Naples, southern Italy. The Italian authorities are taking all necessary measures to close the entire northern Italian region of Lombardy, which is home to around 16 million people, in an attempt to stop the COVID 19 coronavirus.
KONTROLAB

Italy’s extended quarantine restricting the movement of people in its industrial northern heartland have provoked panic among residents and accentuated the country’s north-south divide.

Prime Minister Giuseppe Conte signed a decree on Sunday imposing restrictions to the movement of people in the northern region of Lombardy — the epicenter of the outbreak in Italy — and 14 other provinces across the north, until April 3. The measures (an extension of a preexisting lockdown of 11 towns in Lombardy and Veneto) now affect more than 16 million people, banning them from moving in and out of those areas.

The publication of a draft decree Saturday afternoon by a newspaper revealing the forthcoming, wider quarantine measures prompted panic among residents trying to get out before the restrictions came into force after midnight.

Media reports said bars and restaurants emptied and thousands of people tried to leave the region in cars and trains, where there were reports of shoving and pushing by passengers.

Violent protests have broken out in 27 Italian prisons against coronavirus restrictions with many inmates asking for an amnesty due to the virus emergency, news agency ANSA reported Monday, citing local sources.

Some 20 inmates had managed to break out of Foggia prison in Puglia during a riot Monday morning, ANSA said citing local sources.  Shop keepers in the area were told to close their shops in the vicinity of the prison.

Prison unrest broke out in a prison in Modena Sunday after inmates were informed that visits from relatives had been banned to prevent the spread of infection. In the south, relatives of detainees in a Poggioreale prison in Naples clashed with police against the government ban. 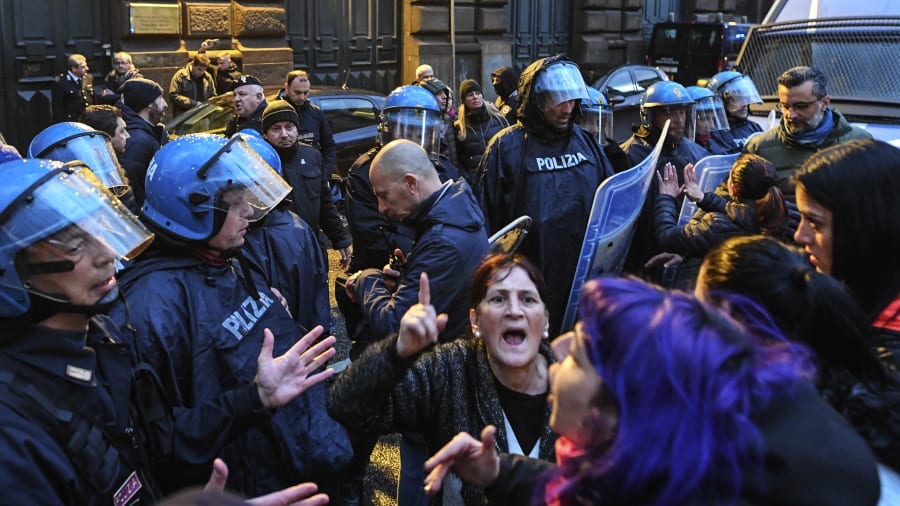 Relatives of the detainees in Poggioreale prison clash with the police to protest the government’s ban on visiting detainees to prevent infection with Coronavirus (COVID-19) in prisons.  –  KONTROLAB

Italian stocks on the blue-chip FTSE MIB initially failed to open Monday along with other European markets. When the index did open, stocks were trading down around 2,290 points, or around 11% lower, and by late afternoon the index was down around 9.5%.

Italy now has 7,375 confirmed cases of the virus and 366 deaths. The outbreak has been concentrated in Italy’s wealthiest northern regions of Lombardy (where there are 3,372 confirmed cases), Emilia-Romagna (with 1,097 cases) and Veneto and has highlighted Italy’s north-south economic and cultural divide.

The presidents of the southern regions of Campania, Puglia and Calabria — which have far few cases of the virus — have pleaded with their own inhabitants studying or working in the north not to bring the virus back down south, telling people “don’t come down here.”

Those regions, as well as Basilicata and Molise, have signed decrees ordering anyone who does arrive from the affected northern regions into a self-imposed quarantine for two weeks. Puglia’s president said those who ignored the order were committing a crime and could be prosecuted.

“I speak to you as if you were my children, my brothers, my nephews and nieces: Stop and go back,” Michele Emiliano, Puglia’s president, said on Facebook Saturday.

“Get off at the first train station, do not catch planes for Bari and Brindisi, turn back in your cars, get off your buses at the next stop. Do not bring the epidemic that has hit Lombardy, Veneto and Emilia-Romagna to your Puglia,” he said, appealing to the region’s citizens stuck in the affected areas. 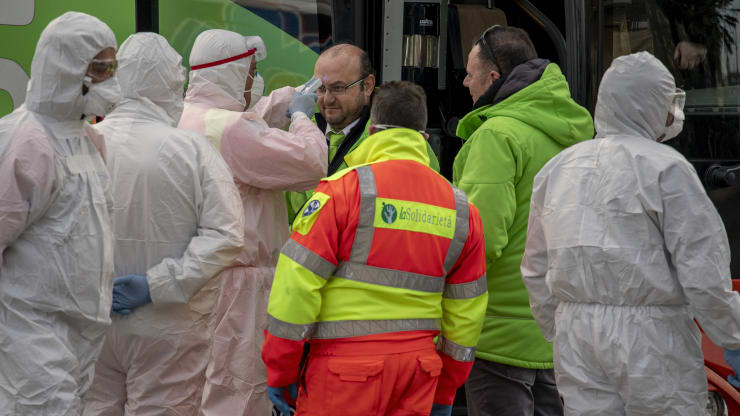 Medical officers check the temperature of a traveler of a bus coming from several Italian cities in Salerno, Italy on March 8, 2020. – Anadolu Agency

La Repubblica newspaper quoted Jole Santelli, the governor of Calabria, as telling people that “returning from the north in an uncontrolled way puts our country in danger. … Don’t do it, stop!”

“The government must block an exodus to Calabria, which risks triggering a disastrous bomb,” said Jole Santelli, the president of Calabria.

Economists predict that Italy’s economy, weak before the outbreak, will go into recession and the government has already announced that it will spend billions of euros to try to mitigate the economic impact of the virus on businesses and to help the north’s beleaguered health-care system.