Why is Deep State in such a panic?

WHY THE DEEP STATE IS IN A PANIC! LOOK WHAT THEY ARE DESPERATELY TRYING TO COVER UP! 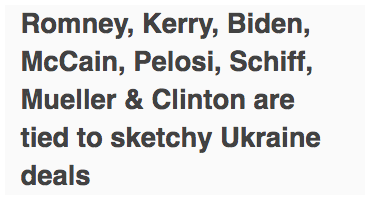 Mitt Romney’s top adviser, Joseph Cofer Black, joined the board of the Ukraine energy firm, Burisma, while Hunter Biden was also serving on the board. Hunter Biden was taking a salary of $83,000 per month from Burisma, and was simultaneously engaged in a relationship with John Kerry’s stepson, Chris Heinz, and mobster Whitey Bulger’s nephew, in a private equity firm, that allegedly appeared to be laundering millions of dollars in foreign money from China & the Ukraine, through Latvia, and back to the US.

Romney’s adviser, Joseph Cofer Black, trained for covert operations and eventually became the director of the National Counterterrorism Center. After the September 11, 2001 terrorist attacks, perpetrated by al-Qaeda, Black was appointed ambassador at large and coordinator for counterterrorism in December 2002 by President George W. Bush. John Brennan succeeded Black in his job as director of the National Counterterrorism Center. Cofer Black left the CIA in 2006 to join Blackwater, the huge contractor for services related to military and intelligence action, where he served as Vice Chairman until 2008.

Did you know Ghislaine Maxwell’s father, Robert, a close friend of Jeffrey Epstein, helped Mitt Romney build his fortune at Bain? See all the ties that bind?

It appears that Romney, Kerry, Biden, McCain, Pelosi, Clinton, Mueller and Schiff all have ties to Ukrainian firms. VP Biden bragged on camera that he was able to force the former Ukraine President to fire a prosecutor who was investigating his son, Hunter, by threatening to withhold $1 BILLION in US loans from Ukraine – all with approval from Obama!

An Obama State Department staffer also testified he complained about Hunter Biden’s Ukraine deal in 2015 & Biden’s staff “blew him off.” John Solomon revealed emails showing that Ukraine’s Burisma Holdings pressed Obama’s State Department to help them end the investigation into Hunter Biden & another Burisma board member ONE MONTH BEFORE Joe Biden extorted Ukraine to fire the Ukrainian prosecutor investigating his son, Hunter, who sat on Burisma’s board.
While Communist China ran $1.5 BILLION through the Biden/Heinz private equity firm to purchase US companies with military ties, John Kerry, as Secretary of State, approved questionable acquisitions that threatened national security, but enriched his family and friends. Hunter Biden’s Chinese business partner stole American nuclear technology & accepted a plea deal 2 weeks before Trump took office! Hunter Biden received $700,000 from a company that held a 20% stake in a Chinese private equity firm with close ties to the Bank of China.

Kurt Volker, who served as the U.S. Ambassador to NATO under Obama, and was just fired from the Trump White House as special envoy to Ukraine, is the executive director of the John McCain Institute. McCain’s wife says it’s mean for Trump to question the Biden family’s corruption in China & Ukraine: “I think Joe’s a lovely man.” Kurt Volker testified that Adam Schiff privately pushed him to frame Trump but he refused to do it. And don’t forget about McCain, Soros & the Keating 5!

We also know that Ukraine was involved in helping the Clinton campaign fabricate evidence against Paul Manafort to smear the Trump campaign. We also know that the firm the DNC used to “inspect” the DNC email server, Crowdstrike, is funded by anti-Russian Ukrainian Oligarchs and run by a man who used to work for Mueller at the FBI! Many believe Crowdstrike backed up Hillary’s server and hid the DNC server in Ukraine!

Most concerning of all, the former CEO of Danske Bank in Estonia, Aivar Rehe, a bank known for money laundering during the years Obama and Biden were in office, was just found dead in his yard. He was a witness for the prosecution in a $220 BILLION money laundering scandal involving transfers to Latvia.

Rudy Giuliani intimated that this corrupt banking network was likely used by Biden & pals to launder foreign $ from the Ukraine & China – to Latvia, Cyprus and on to America. Records show that some 10,000 “non-resident” accounts were involved. Giuliani says he began investigating Joe Biden before he announced his run for President and that more “corroborating” evidence is forthcoming.

Rudy Giuliani, who was once James Comey’s boss, and the former Mayor of New York during 9/11, took down the mob and runs one of the biggest private investigation firms in the world. Don’t underestimate Rudy. He already has videotaped interviews of the Ukraine prosecutor that Biden forced out of office. Giuliani says frenzied Democrats are using impeachment to try to cover up their crimes – which are MUCH bigger than you think!

NEW Ukraine documents reveal complex foreign money transfers into “slush fund” operated by John Kerry’s stepson & Hunter Biden. “I discovered a pay-for-play scheme in Obama’s administration the media has covered up & is devastating for Democrats. The minute I mentioned Biden’s name, I told my colleagues they’re going to try to kill me – kill the message.”

Colonel Vindman, an anti-Trump Ukraine expert on the NSC, testified that he altered & leaked Trump’s call to secret operatives! Vindman testified to the House that he “thought” the President was wrong in his policy with Ukraine so he told Ukrainians to ignore the President. Eric Ciaramella has been outed by numerous people as the alleged whistleblower. Federal documents reveal that the 33-year-old Ciaramella was a registered Democrat who previously worked in the Obama White House with former Vice President Joe Biden, Adam Schiff’s staff and former CIA Director John Brennan.

Ciaramella was an intelligence officer specializing in Russia and Ukraine. He was a staffer on the National Security Council, where he was responsible for policy regarding Ukraine. He was H.R. McMaster’s personal aide and during the Obama administration had worked with Susan Rice. Ciaramella had gained a reputation as an inveterate leaker, which, he claimed, had resulted in “death threats” from “right-wingers.” This was the reason he gave for leaving the NSC in 2017. In reality, he was fired from the National Security Council in 2017 for leaks, and returned to the CIA.

Ciaramella was a vocal critic of Trump who helped initiate the Russia “collusion” investigation of the Trump campaign during the 2016 election. The Democrat attorney for the so-called “whistleblower” bragged in 2017 that he was part of a coup to remove President Trump from office.

Also, Lawfare, the legal gurus behind Pelosi’s end run around the Constitution in impeachment, are tied to Brookings, Huawei & Communist China. In other words, Communist China is funding the removal of President Trump. Steve Bannon is building an “impeachment war room” to counter Pelosi & Lawfare’s political disinformation campaign against Trump.

BANNON: “Joe Biden is the hand grenade & Hunter Biden is the pin. When it’s pulled, the shrapnel will blow back all over the DNC.”

On 11/14/19, Ukraine indicted Burisma’s CEO for $7.4 BILLION in money laundering & the media buried it for 6 days. What else happened that day? There was a California school shooting at Democrat Katie Hill’s former high school! 24/7 media coverage.

The Ukrainian indictment of Burisma’s CEO implicated Biden, the DNC, Obama donors, Blackrock & Obama’s National Security Adviser. Schiff & Obama are both connected to both BlackRock and Franklin Templeton Investments, two companies that were named in the $7.4B Burisma/US-Ukraine corruption claim.

Joe diGenova says George Soros wants to control Ukraine and will use every lever he has in the US Government to make that happen.

Why are so many wealthy, corrupt Ukrainians tied to the Deep State, the Democrats & Communist China? Ukraine was formerly known as UkSSR, the Soviet Ukraine, and was run by Communists until 1991.
Did you know that Obama put John Podesta in charge of “upgrading” the NSA databases in 2014? Now you know why. For SpyGate. Get ready. Giuliani is about to expose the entire Deep State Ukraine money laundering cabal LIVE ON TV FOR ALL THE WORLD TO SEE.

1/14/20 IMPORTANT PLOT TWIST: The New York Times is spreading fake news that “Russia” hacked Hunter Biden’s Ukrainian company “Burisma” to hurt the Democrats for 2020. So, therefore, the lamestream media won’t be reporting on any news about Hunter Biden’s corruption with Burisma, if it comes up during the impeachment trial, because they’ll argue it’s all been PLANTED by Russia ANYWAY to help Trump in 2020.

See how that works? They used the same Trump-Russia collusion narrative in 2016 about Russia hacking into the DNC to explain why Wikileaks had Hillary’s & Podesta’s emails and to cover up the real reason for Seth Rich’s mysterious death (he likely sent them to Wikileaks himself.) The DNC always blames Russia to cover up their own crimes.

Update 1/22/20: Peter Schweizer’s new book says Joe Biden is the KING of “sweetheart deals.” 5 members of his family got rich off his office. The Biden Five.

Update 2/28/20: Ukraine announced they have opened a criminal investigation into the Bidens & Senate GOP to subpoena witnesses to testify against the Bidens.

Politicians set up companies, NGO’s and business networks in other countries to receive those funds. Their family remembers run the organizations, or join the boards, and take a cut.

They set up investment vehicles and banking networks to receive foreign money and launder it back to the US or to George Soros to fund the “resistance.” Unelected bureaucrats & Ambassadors take a cut for facilitating the scam and covering it up.

RICO Rudy uncovered the paper trail – from Communist China, to Ukraine, to Cyprus, to Latvia and back home. That’s why the Deep State is in such panic.