Kirkland, WA continues to be ground zero for COVID-19 as ER doc in critical condition. 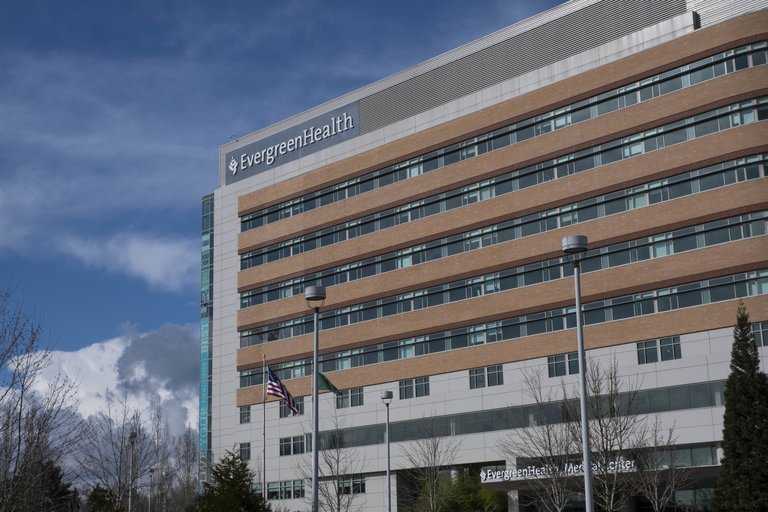 An emergency room doctor at EvergreenHealth is in critical condition with COVID-19. (Dean Rutz / The Seattle Times)

An emergency room doctor at EvergreenHealth in Kirkland is in critical condition with COVID-19, the disease caused by the new coronavirus.

The hospital at the center of the coronavirus outbreak in King County confirmed that the doctor was ill Sunday afternoon.

“EvergreenHealth is providing care for one of our physicians who has a confirmed case of COVID-19. He is in critical condition but stable. Out of respect for our patient’s privacy and that of his family, there is nothing more we can share at this time,” says a brief statement issued by the hospital on Sunday.

The physician, who is in his 40s, has been admitted to the intensive-care unit and could be the first front-line health care worker in the state to test positive for the disease, said Dr. Liam Yore, the immediate past president of the Washington Chapter of the American College of Emergency Physicians.

Yore is an emergency room doctor who works primarily at Providence Regional Medical Center in Everett but is also on staff at EvergreenHealth. He spoke to The Seattle Times on behalf of his professional organization and not as a representative of the hospitals.

“There was an initial test on Tuesday and that came back negative,” Yore said of his EvergreenHealth colleague, who he described as “a dedicated and selfless physician.”

But the doctor presented clinically with symptoms, so a second test was done Friday, Yore said. That test came back positive, and the doctor was admitted.

“I can confirm he did not care for any patients while he was symptomatic,” said Yore, adding it is impossible to know if the doctor contracted the virus at work or in the community, especially because widespread community transmission is thought to be happening across the state.

Yore said that the physician had used personal protective equipment and was compliant with all protective policies and procedures in place at the hospital.

While Yore has heard only isolated reports of equipment and supply shortages, he said doctors are concerned about the supply chain and the capacity of ERs and intensive-care units (ICU) to care for new patients as the epidemic worsens.

“At this point in the epidemic, I’d say the emergency rooms of Washington are handling it really well,” he said, noting hospitals have long been involved in disaster planning, especially after the SARS epidemic of the early 2000s and the Ebola outbreak a few years ago. “The concern we have is as the number of cases grows exponentially, there will come a tipping point at which time the capacity of the ERs and ICUs will become saturated.”

It’s that concern that has ER doctors, nurses and other front-line health care workers feeling “a very deep sense of apprehension about what will come,” Yore said.

The first confirmed case of COVID-19 was in Snohomish County on Jan. 21, according to the state Department of Health (DOH). As of Sunday, the DOH reported 769 confirmed cases, with the bulk of them — 420 cases — reported in King County. More than 7,000 people have been tested and received negative test results for the virus, according to DOH.

Yore said 10% to 15% of people who contract the illness require hospitalization and 5% require admission into the ICU. That’s based on published data from China’s outbreak, which is the best data available even though it’s unknown if it will extrapolate in the U.S.

King and Snohomish counties offer some 4,900 staffed hospital beds, of which about 940 are used for critical care, according to researchers at the Institute for Disease Modeling, the Bill & Melinda Gates Foundation and the Fred Hutchinson Cancer Research Center, who created a model of the outbreak’s potential growth.

With many hospital ICUs running at near capacity before the outbreak, Yore said hospitals are adapting and working to expand capacity but could be overwhelmed by a surge of new cases.

“If the number of cases gets up to 10,000, then we’re looking at 1,500 people requiring hospitalization and 500 requiring admission to the ICU. If it gets to 100,000, you can do the math — 10,000 would require hospitalization and 5,000 would be admitted to the ICU,” Yore said. “Somewhere in there is where the health care system is very vulnerable. It’s looking at those numbers I find most sobering.”

He urged the public to “self triage” and not show up in hospital emergency rooms for minor injuries and illnesses, suggesting instead that those people contact their doctors or go to an urgent-care clinic to preserve ER capacity for people who are seriously ill.

“If there’s anyone who is the unsung heroes of this epidemic, it’s emergency-room nurses,” Yore said. “As the physician, I only spend a short period of time with a patient. The nurses are in there, face-to-face (with patients) for hours, doing the direct patient care.”

In a news release, the American College of Emergency Physicians confirmed two known cases of doctors in critical condition after contracting the virus: The Kirkland doctor and a 70-year-old doctor in Patterson, New Jersey.