Is this explosion of NYC coronavirus cases because of the intensive 5G roll-out? 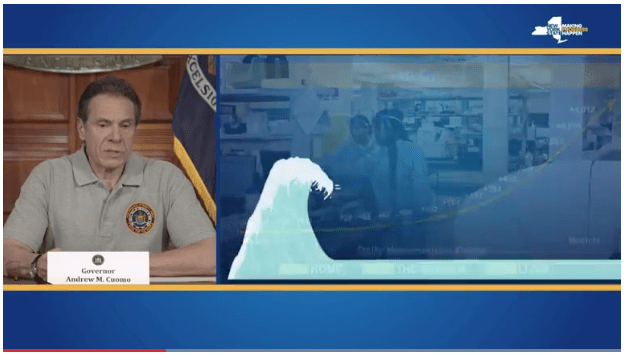 The number of confirmed cases of the deadly coronavirus has climbed to 20,875 statewide — including more than 5,000 new cases today — and 12,305 in New York City, Gov. Andrew Cuomo announced Monday.

The grim toll also includes 157 deaths in the Empire State — representing more than a third of the 463 deaths nationwide — as well as 5,707 new state cases compared to Sunday.

“I see it as a wave that will break at one point, and the question is, what is the point of the break?” said Cuomo. “When the wave breaks, does it crash over the health care system?”

“We’re saying we want to enlist you to help,” said Cuomo, noting that so far, the state has received over 30,000 responses.

Cuomo also asked insurance companies to shift their staff nurses to the front lines of the fight, which he’d previously said could drag into 2021.

“We would like them to help in hospitals, because this is not about assessing insurance claims,” he said. “At this point, this is about saving lives.”

Later Monday, Cuomo will tour Manhattan’s Javits Center, where he has asked the Federal Emergency Management Agency to establish four temporary hospitals, adding a cumulative 1,000 beds to the state total of 53,000 beds.

The projected trajectory of the disease indicates that the state will need 110,000 beds, Cuomo has said.

“We cannot handle the wave at the high point,” he said. “The wave has to come down.”