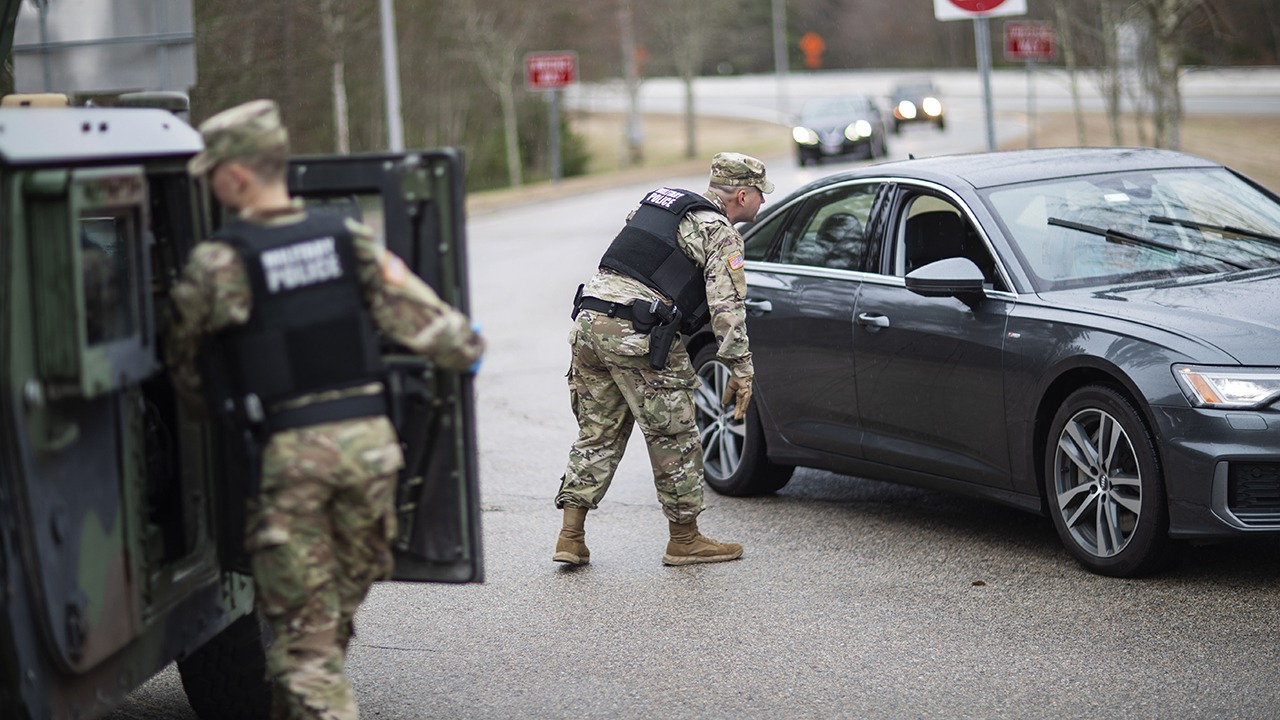 A member of the Rhode Island National Guard Military Police directs a motorist with New York license plates at a checkpoint on I-95 over the border with Connecticut where New Yorkers must pull over and provide contact information and are told to self-quarantine for two weeks, Saturday, March 28, 2020, in Hope Valley, R.I. Rhode Island Gov. Gina Raimondo on Saturday ordered anyone visiting the state to self-quarantine for 14 days and restricted residents to stay at home and nonessential retail businesses to close Monday until April 13 to help stop the spread of the coronavirus. (AP Photo/David Goldman)

BY MORGAN GSTALTER
The Hill

Rhode Island police have begun stopping cars with New York license plates, and the National Guard will soon help officials conduct house-to-house searches to force anyone who has traveled from New York to enter isolation.

“Right now we have a pinpointed risk,” Gov. Gina Raimondo (D) said, according to Bloomberg. “That risk is called New York City.”

Raimondo on Thursday issued an executive order enforceable by law mandating that anyone who has traveled to New York via any form of transportation must enter into a two-week self-quarantine.

The order applies to anyone who has been in New York within the past two weeks and will remain in place until at least April 25. The order, however, does not apply to public health, public safety or health care workers.

Raimondo announced on Friday that members of the National Guard will be present at T.F. Green Airport, train stations and bus stops to collect contact information for the state health department “so they can keep track of who you may have been in contact with.”

National Guard soldiers will then follow up with people at their local residences to ensure they are following through with self-quarantine orders.

Authorities will also be checking towns where many New Yorkers are known to have summer homes, according to the governor.

The maximum penalty for those found to be defying the executive order is a fine of $500 and 90 days in prison, according to Bloomberg.

The outlet reported that state police cars were stationed along Interstate 95 northbound on Friday afternoon and that signs ordered all New York passenger vehicles to pull over at the rest stop closest to the Connecticut border.

The outlet also reported that Raimondo had consulted with lawyers about the order and was confident it could be enforced.

However, the local chapter of the American Civil Liberties Union (ACLU) objected to the collection of motorists’ data.

“While the Governor may have the power to suspend some state laws and regulations to address this medical emergency, she cannot suspend the Constitution,” Rhode Island ACLU Executive Director Steven Brown said in a statement. “Under the Fourth Amendment, having a New York state license plate simply does not, and cannot, constitute ‘probable cause’ to allow police to stop a car and interrogate the driver, no matter how laudable the goal of the stop may be.”

The group urged Raimondo “not to follow through with such an ill-advised and unconstitutional plan.”

New York has emerged as the epicenter of the coronavirus outbreak in the U.S., accounting for roughly half the total number of cases in the country.

New York Gov. Andrew Cuomo (D) on Saturday reported that 728 people have died in the state because of the coronavirus and said there were 52,318 confirmed cases, including 7,681 new cases.