*See how the Mainstream Media is already demonizing FREEDOM CONVOY 2022

Submitted by The Intel Analyst
State of the Nation

If there’s one thing that scares the bejesus out of the New World Order globalist cabal, it’s PEOPLE POWER.

Nothing frightens them like the spontaneous upwelling of raw uncontrollable outrage.  NOTHING!

Which is exactly why his masters just sent globalist puppet Justin Trudeau into hiding with an obviously false Covid alarm.

So, what then will The Powers That Be do with Canada’s awesome Freedom Convoy 2022?

Well, what would anyone expect the NWO cabal to do if the largest truck convoy in world history completely surrounded any major capital city? And then brought the greater metro area to a complete standstill via total truck-imposed gridlock?   And then demanded that the government immediately (i) end the lockdowns, (ii) terminate all mandates, (iii) cancel the vaxports and (iv) rescind any orders regarding Covid ‘vaccine’ requirements?

Answer: TPTB will do whatever they think they need to do to quickly bust up this Canadian trucker protest.  Because if they don’t, the cabal knows they will soon be facing a worldwide domino effect as truckers across the planet pull off copycat protests wherever there’s an 18-wheeler, semi or big rig driven by an unvaxxed driver.

Which can mean only one thing: TPTB will, in all likelihood, stage some sort of a horrific false flag terror attack in Ottawa or in some other major Canadian city in order to falsely blame the peaceful FREEDOM protesters.

Isn’t this what they always do?  Unless, of course, they start World War III in the Ukraine this February!  After all, what bigger “terrorist attack” and “mass casualty event” is there than [DRAMATIC] kinetic military action in the Donbas prior to triggering the hot phase of WW3.

Whether the cabal fakes a domestic terrorist attack in Canada, or provokes Russia to overwhelmingly protect the Russian speakers in the Ukraine remains to be seen; however, there’s no doubt that the World Shadow Government will do something sooner than later in Ottawa.  They really have no choice if they are to avoid a VERY public hanging.

The evidence is quickly emerging that a [SHOCKING] false flag terrorist operation(s) is in the making for Ottawa.  Everything points to multiple government-sponsored terror attacks being staged at strategic location to falsely blame on FREEDOM CONVOY 2020.

The Canadian Covid tyrants are now to their eyeballs in alligators.  They’re also surrounded by the largest convoy of trucks ever assembled in world history … with no where to run to.  Except Justin “The Coward” Trudeau, of course. (See: RUMOR: TRUDEAU IS ON VANCOUVER ISLAND.)  Therefore, they are desperate enough to execute any black operation necessary to shut down the peaceful protest in Ottawa.

If ever the GLOBAL FREEDOM MOVEMENT(1) is vulnerable to being maliciously attacked, and then falsely accused of carrying out that false flag attack, that time is right now somewhere in Ottawa, Canada. 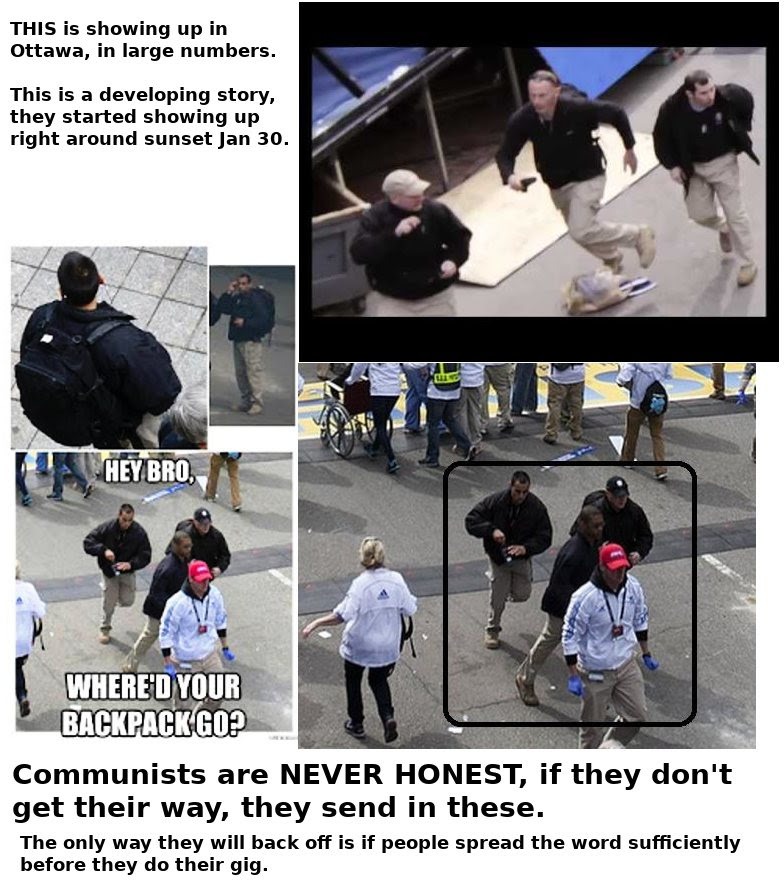 SPECIAL NOTE: It’s absolutely critical for the Canadian truckers not to leave Ottawa until the entire Trudeau administration is legally apprehended and/or arrested.  There will be NO second opportunity to frogmarch those Covid criminals out of their Ottawa offices.  While incarcerated, all suspects can be indicted, tried, convicted and sentenced for their egregious crimes against humanity.  We repeat, all Canadian political leaders and government officials, who are self-incriminated Covid genocide suspects, must be immediately detained by law enforcement before they escape to foreign nations which have been already set up as safe havens to receive them.

*PLEASE, Everyone, Post and Send this Warning to
Every Canadian—ASAP!!!