Open Letter to the POTUS: Economic Death Date for USA is May 1, 2020 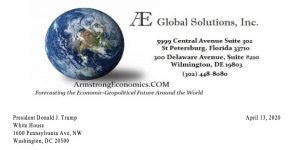 I am writing to you once again to warn that the current solution of shutting down the world economy is far worse than the disease. My company developed a computer forecasting model that has picked every financial crash since 1987. All intelligence agencies are well aware of its existence. Our computer model has forecast wars and the political collapse of nations such as Russia in 1998. That forecast was even reported on by the London Financial Times prior to the event occurring.

To be direct, our computer is showing that if the economy remains closed beyond May 1st, we are looking at a global economic decline that will not bottom for 13 years until we reach 2032. There are people, such as Bill Gates and Anthony Fauci, who have been advocating an economic shutdown on newspapers and television shows around the world. I believe Gates is merely using this to further his theory on vaccines without any regard for the economic destruction these policies have caused and Fauci is compromised by Gates’ donations to the all health organizations.

The current rate of unemployment is outpacing the loss experienced during the Great Depression when it took three years to reach a rate of 25%. This economic closure is being used to exploit the people for political gain. It is hurting the poor the most, for they are losing jobs that will not return. Gates and Fauci have no respect for the economic damage and stress they have imposed upon the people nor do they take any responsibility for the economic collapse they have instigated.

The Democrat’s opposition to helping small businesses and their preference for handing out checks is idiotic. They will hand a person a fish to feed them for a single day and standby gleefully as they destroy that person’s ability to find employment. Not only are jobs being destroyed, but pensions. There is no consideration for the impact upon the states and they will have to raise taxes as trying to issue more debt proves difficult in the midst of an economic collapse. Some see this as a deliberate move to force Universal Basic Income in place of employment to create a larger welfare state.

Our computer has never wrongly forecast any major economic trend. Its reliable model is based upon capital flow movement, which is a proven result unlike academic theories that have failed since Karl Marx to John Maynard Keynes. The negative interest rate policy of central banks has wiped out pensions and trapped the central banks of Japan and Europe. They have destroyed their bond markets. Their only remaining tool is to cancel the currency and use this crisis to issue a new variety of debt in hopes of reviving their bond markets.

The solution must also take into consideration that this is a political war. The very same people who have been advocating shutting down the economy are seeking socialism under the banner of climate change. These people are behind the demand to shut down the world economy by using a virus where the death toll is on par or less than the annual flu.

I urge you to issue an executive order suspending for the duration of the lockdown in any state as a permanent abatement:

1) all interest payments, both personal and business, on any loan including credit cards;

3) payments of any rents or mortgages; and

4) payments of any taxes, state and local.

This will send lobbyists clamoring against those advocating this lockdown. Advocates like Bill Gates, who is now arguing that everyone should remain locked down for 18 months until he comes up with a vaccine, must be dealt with and not ignored. You must give the governors the incentive to look at this economic destruction in their own self- interest. The only remaining political weapon is money and it is time to fight back. Let them go to the Supreme Court to fight this out.

The CDC, NIH, and WHO accept private donations which must stop immediately. It is not that the WHO is China centric, but rather they are dominated by Bill Gates. The

advice you are receiving is not independent and you should replace your advisers with real independent sources. The US National Library of Medicine warns that this lockdown is dangerous to the people for it amounts to mental torture.

“This period of anxiety and adjustment to the isolation routine lasts from 1 to 3 weeks. Further isolation of 4–6 weeks leads to a feeling of dejection and increasing dependency, loss of initiative and spontaneous activity, lack of interest in personal appearance, immobility and vacant gaze.” (https://www.ncbi.nlm.nih.gov/pmc/articles/PMC4890253/)

There are forces using this virus for ulterior moves and creating a global economic collapse. They are dangerously undermining the entire world financial system, which threatens the rise of war. Historically, war never emerges as long as everyone is fat and happy. Rome fell because it first was weakened internally by corruption which then encouraged the barbarians to storm the gates

The veil of civilization is being pulled back. Everything past generations have fought for is at risk. The economy expanded and life expectancy increased all on the back of prosperity. That is now all being undone

Our fragile democracy and civilization itself rest in your hands. It will take someone with great courage to defend these principles if we are to survive as a civilization, society, and nation. I implore you to take action and recognize this is being used as a political weapon without any regard for the people themselves.