WATCH OUT, Deep State, the American people have only just begun to wake up and protest 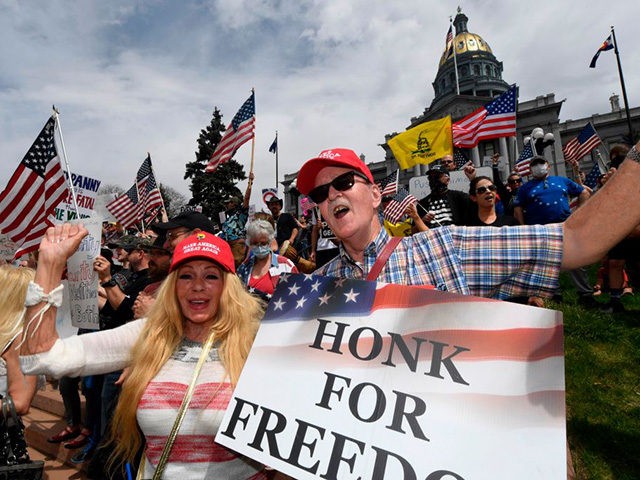 People across the nation are taking part in “reopen” rallies and protests, demanding for governors to begin lifting strict measures put in place to slow the spread of coronavirus in their states.

Many of the rallies have been and are being organized on Facebook, often hosted by Facebook groups that back reopening businesses and states’ economies.

NBC News anchor Andrea Mitchell on Sunday called the supporters of reopening states “what could be a new emerging Tea Party movement.”

More protests are planned for May, in Wilmington, Delaware; Concord, New Hampshire; Carson City, Nevada; and in cities all across California.

Protesters are encouraged to bring American flags, wear masks, and comply with social distancing protocols. Those who feel sick are encouraged not to attend. Many rally organizers emphasized the protests would be peaceful.

“Attendees are Expected by Government Officials to Comply with all Social Distancing protocols enacted by the State. Make your own choices at your Discretion,” read a note for the protest in Delaware.

The protests are being organized locally, with no coordination between groups, and cite differing reasons.

The protest in Allentown was to protest “government overreach and unconstitutional rules.”

The protest in Oklahoma City, Oklahoma, was “for those that have lost [their] jobs, been forced to shut down your business, or are just sick and tired of out tyrannical governments imposing unjust laws and trampling on our constitution.”

The Riverside, California, event was “to let the county official’s know that we are tired of our businesses, religious centers and parks being closed down. Stand up and let your voice be heard.”

Some organizers are opting for caravans. On Friday, a group is expected to host a “Re-Open California” vehicle demonstration to demand Gov. Gavin Newsom (D) end the lockdown in California.

Some groups are hosting call blitzes and urging people to contact their state representative.

One group in Georgia held a call blitz on April 23, providing a script:

I am a taxpaying voter and I am calling/writing to voice my extreme displeasure with the Governor’s unconstitutional lockdown of our state. This unilateral action is destroying small businesses all over the state and inflicting more financial and emotional harm than COVID-19. The illness, while severe, is not nearly as damaging to our state as this wild government overreach.

I demand that you act as a voice of reason in our state legislature, limit his emergency powers and encourage the Governor to open up the state of GA for business no later than the current April 29th order and end this state-sponsored suicide.

The protests come as states are beginning to take steps towards reopening. Georgia most notably began last week.

By next week, nearly half the states will have made moves toward reopening their economies, according to the New York Times.