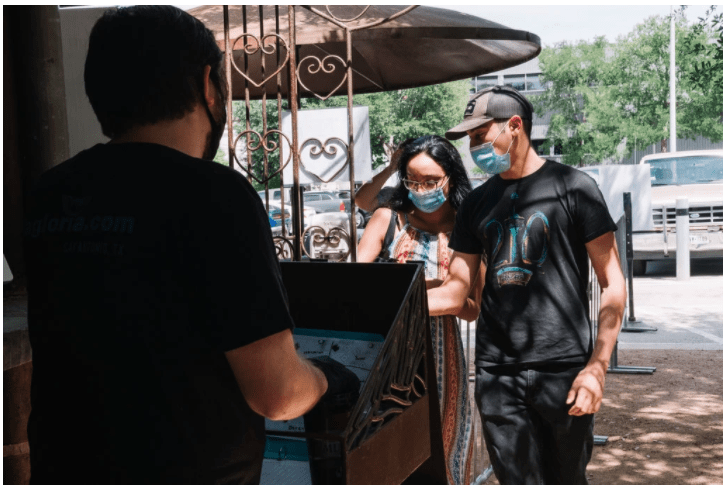 Restaurants recently began to reopen in San Antonio. To date, 24 states have begun allowing certain businesses to reopen, sometimes only in certain counties. (Credit.Christopher Lee for The New York Times)

By Abby Goodnough and Maggie Haberman
The New York Times

Detailed guidelines for reopening drafted by the Centers for Disease Control and Prevention were blocked from publication after Trump administration officials labeled them “overly prescriptive.”

WASHINGTON — As President Trump rushes to reopen the economy, a battle has erupted between the White House and the Centers for Disease Control and Prevention over the agency’s detailed guidelines to help schools, restaurants, churches and other establishments safely reopen.

A copy of the C.D.C. guidance obtained by The New York Times includes sections for child care programs, schools and day camps, churches and other “communities of faith,” employers with vulnerable workers, restaurants and bars, and mass transit administrators. The recommendations include using disposable dishes and utensils at restaurants, closing every other row of seats in buses and subways while restricting transit routes among areas experiencing different levels of coronavirus infection, and separating children at school and camps into groups that should not mix throughout the day.

But White House and other administration officials rejected the recommendations over concerns that they were overly prescriptive, infringed on religious rights and risked further damaging an economy that Mr. Trump was banking on to recover quickly. One senior official at the Department of Health and Human Services with deep ties to religious conservatives objected to any controls on church services.

“Governments have a duty to instruct the public on how to stay safe during this crisis and can absolutely do so without dictating to people how they should worship God,” said Roger Severino, the director of the Department of Health and Human Services’ Office for Civil Rights, who once oversaw the DeVos Center for Religion and Civil Society at the Heritage Foundation.

A spokesman for the C.D.C. said the guidance was still under discussion with the White House and a revised version could be published soon.

“Over the last week, C.D.C. has been working on additional recommendations and guidance for reopening communities, returning to public events, and I expect, even today, that we’re going to receive a presentation on that,” Vice President Mike Pence said on Thursday on a radio show broadcast in Pittsburgh. He added that what C.D.C. would be doing, as it often did, “is publishing health care guidance at CDC.gov in the very near future.”

The C.D.C.’s director, Dr. Robert R. Redfield, and other leaders of the agency have had almost no public platform during the pandemic, with Dr. Deborah L. Birx, an infectious diseases expert coordinating the White House’s coronavirus response, and Dr. Anthony S. Fauci, another member of the coronavirus task force who is the longtime director of the National Institute of Allergy and Infectious Diseases, handling most of the public speaking on the federal public health response, usually at briefings dominated by Mr. Trump. After the C.D.C. recommended the public wear masks, Mr. Trump said he probably would not do so, even as he announced the guidelines.

The rejection of the C.D.C.’s guidelines for reopening is the latest confusing signal as the Trump administration struggles to balance the president’s desire to quickly reopen the country against the advice of public health experts, who have counseled reopening methodically through a series of steps tied to reduced rates of infection and expanded efforts to control the spread of the coronavirus.

This week, the White House signaled it would wind down its coronavirus task force only to reverse course amid a public outcry. Last week, Mr. Pence refused to wear a surgical mask at the Mayo Clinic, then apologized.

The mixed signals extend to reopening guidelines: On April 16, Mr. Trump’s coronavirus task force released broad guidance for states to reopen in three phases, based on case levels and hospital capacity. But some members of the task force and other aides saw the more detailed C.D.C. guidance as a document that could slow down the reopening effort, according to several people with knowledge of the deliberations inside the West Wing.

To date, 24 states, mostly in the South, Great Plains and Interior West, have begun allowing certain businesses to reopen, sometimes only in certain counties. Many more have businesses that are set to reopen or stay-at-home orders that could lift in the next week or two.

In a senior staff meeting last week at the White House, Mark Meadows, the chief of staff, expressed concern that the guidelines were too uniform and rigid for places with minimal numbers of cases, according to a person familiar with the discussion.

Particularly contentious were the C.D.C.’s recommendations for churches and other houses of worship. Mr. Severino vocally opposed them.

“Protections against religious discrimination aren’t suspended during an emergency,” he said in a statement on Thursday. “This means the federal government cannot single out religious conduct as somehow being more dangerous or worthy of scrutiny than comparable secular behavior.”

The recommendations for churches include encouraging all congregants to wear cloth face coverings when inside the building, offering video streaming or drive-in options for services and considering “suspending use of a choir or musical ensemble” during services. It also urges churches to consider “temporarily limiting the sharing of frequently touched objects,” like hymnals, prayer books and passed collection baskets.

A senior Trump administration official, who spoke on the condition of anonymity to talk freely about internal discussions, said that Dr. Birx also expressed skepticism about the C.D.C. guidelines in task force meetings. The official said that Dr. Birx said she was mistrustful of the data the agency had provided, although the official did not specify what exactly the doctor was concerned about.

The guidance, which the C.D.C. submitted to Dr. Birx in draft form on April 23 and to the White House’s Office of Management and Budget last week, was to help states, local governments and businesses adopt specific precautions to help keep the coronavirus from spreading once they reopened. But several federal agencies that reviewed the draft, including the Labor Department and the Office for Civil Rights at the Department of Health and Human Services, protested, saying it would be harmful to businesses and the economy and too burdensome for houses of worship.

A federal official who supports the guidance said that Dr. Birx was in favor of publishing them, and that Joe Grogan, the director of the White House’s Domestic Policy Council, even tried to broker a compromise — but that others in the White House pushed back, especially on the worship section. Dr. Birx was not available for comment.

In one version of the draft guidance, the section titled “Interim Guidance for Communities of Faith” was left blank, with a note in capital letters referring to multiple federal agencies that have to come to agreement. But another version included the guidance for faith communities with the caveat that it “is not intended to infringe on First Amendment rights as provided in the U.S. Constitution.”

“The federal government may not prescribe standards for interactions of faith communities in houses of worship,” the second version states. “C.D.C. offers these suggestions that faith communities may consider and accept or reject.”