FALSE FLAG ATTACK IN POLAND: Another fabricated distraction, but from what exactly? 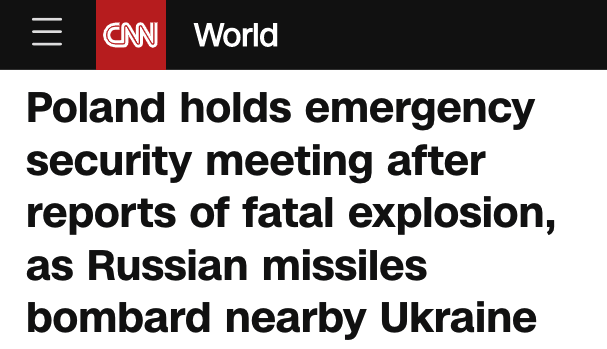 Notice the transparent MSM propaganda in the headline above. There has been no investigation completed by anyone and the CIA’s Mockingbird Media is already blaming Russia without a shred of evidence.

There should be no doubt that the false flag
missile attacks in Poland, just staged by the
Ukraine military in collusion with NATO and
the U.S. Intel Community, were carried out
to achieve various goals.

Very high on that list of objectives was the
Democrat Party’s great urgency to distract the
American people, as well as the worldwide
audience watching the 2022 midterm
outcomes, from their countless election
thefts and rampant vote fraud.  After the
naked 2020 POTUS election theft, the
Democrats know that the MAGA Movement
is on to them during this election cycle, so
they know they have to distract the U.S.
electorate—MAJORLY—as so much vote
fraud is coming to light!

Then there’s Sam Bankman’s FTX money
laundering operation in the Ukraine that
funneled millions of stolen funds into Democrat
campaigns all over America.  Which is why
Kiev was so compelled to change that
radioactive global conversation happening
on the front page of the Internet so quickly
and dramatically.  Because of Khazarian
frontman Zelensky’s personal involvement
in that exploding cryptocurrency scandal, he
did what he always does best—falsely accuse
Russia of the worst international transgression imaginable.  And especially one of such an
offensive nature that it could trigger NATO’s
Article 5.

BOTTOM LINE: The very fact that both the Pentagon and Biden himself (and more recently NATO and Poland) have since indicated that there’s no evidence a Russian missile hit Poland is proof positive that this highly provocative false flag operation was an extremely desperate Ukrainian move to blow up the Eurasian geopolitical chessboard, as well as a stealthy Democrat-driven maneuver to distract from their numerous election thefts.  Zionist warmonger Zelensky has already proven he will do whatever is necessary to trigger Article 5 to draw all of NATO into his US-directed proxy war.  The exceedingly Russophobic Khazarian operative is also well aware of the bad blood between Poland and Russia going back centuries, which is why the two Ukrainian missiles were aimed directly at the Polish village of Przewodów.  Also, notice that Ukraine’s false flag missile attack was timed perfectly with the 2022 G20 Bali summit being held on November 15th and 16th—a meeting during which Zelensky gave a remote online speech despite Ukraine not even being a member.  How do you spell: “TOTAL SET UP”?

SOTN Editor’s Note: The Democrat Party, Kiev Khazarians and Biden Crime Family are all joined at the hip for several decades now.  This latest phase of the Ukraine clusterf*ck began with international Khazarian criminal and Rothschild bagman George Soros buying off the Ukraine government and corralling most of the Ukrainian oligarchs into the same pen of rabid Russophobia.  Then the Pentagon and U.S. Intel Community set up bioweapon labs across the country to pose an imminent threat to Russia.  Next, the same Khazarian perps recklessly tried to park NATO forces and advanced weaponry next to the Russian border, a mere 450 km from Moscow.  Given this deliberately set up and very precarious predicament, Team Biden and Team Zelensky are now in so deep with each other there’s practically nothing they won’t do to distract, divert and misdirect from their exposed schemes and crime sprees.  Furthermore, this “POLAND PSYOP” was also quite conveniently timed with Trump’s announcement of his 2024 candidacy on Tuesday evening, November 15.