BRICKgate: It’s very easy to trace these piles of bricks strategically placed at riot hotspots to the perpetrators but Democrat-run city governments won’t investigate or prosecute. 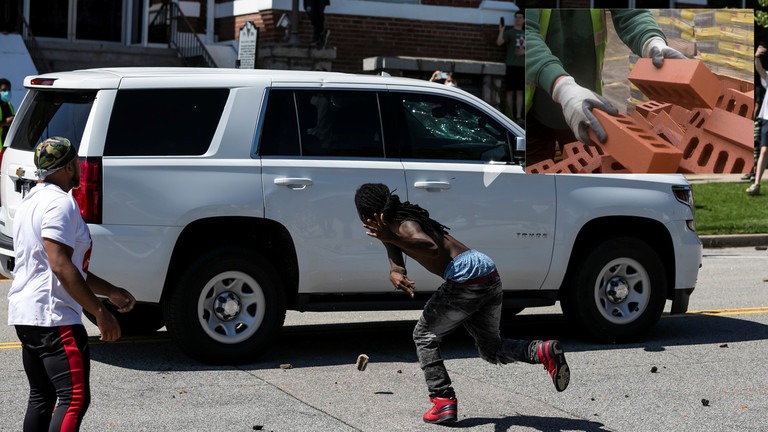 Stacks of bricks left seemingly unattended in riot hotspots across the US – as if begging to be snatched and thrown by unruly mobs – have protesters and journalists wondering whether the violent street clashes are orchestrated.

It’s not every day one sees a stack of bricks just lying around unattended, especially when there’s no construction to be seen – but a rash of reports of pallets of bricks turning up as if by magic in over half a dozen cities over the weekend has investigators trying to get to the bottom of who’s seemingly giving would-be rioters the tools they need to turn what began as peaceful protests violent.

People are waking up! This young man says these bricks were conveniently stacked on the sidewalk for them to use! What’s going on here?! #SetUp #GeorgeFloyd pic.twitter.com/pfdUoDIVsU

A group of protesters in Dallas called attention to the unexpected bounty of construction materials near the city’s courthouse on Saturday. “Ain’t no damn construction around here!” a savvy demonstrator says in the clip, while another urges his fellow protesters to “do better.”

Brick sightings soon mushroomed across the Dallas area, complete with humorous comments about a “patio virus” infecting the neighborhood. Commentators had plenty of theories, claiming the rioters’ fairy godmother was “white supremacists” or Antifa, but none delivered conclusive proof.

Organizers were directing the crowd where to go

They had pallets of 100 bricks ready for rioters

They were yelling to the crowd “go left, there are 100 bricks on the corner over there”

A Texas journalist called around to local government and found that the city of Dallas was claiming ownership of the bricks, thus triggering a whole new round of speculation – smoking gun, or official incompetence?

Update: City is picking up bricks and are property of the city.

The oddly-situated piles of construction materials have been cited by podcaster Tim Pool, conservative organizer Charlie Kirk, and others commenting on the rioting to support claims that outside interests are fueling the most destructive elements.

While the unrest began last Monday in Minneapolis, triggered by the death of a black security guard, George Floyd, who died after a white police officer was filmed kneeling on his neck for seven minutes, protests and riots have since spread across the country, fueled by longstanding racial and class tensions as much as outrage over police brutality.

Another “researcher” has even claimed to have uncovered a connection between the bricks sprouting from sidewalks in Frisco, Texas and Microsoft billionaire Bill Gates. The bricks were said to be delivered by a corporation called AcmeBrick, owned by Berkshire Hathaway, a massive holding company on whose board Gates sat until recently.

But the Frisco Police Department declared the offending bricks were part of a “planned HOA construction project,” explaining they’d been removed “with permission” to be “returned at a later time.”

Update: City is picking up bricks and are property of the city.

And the Kansas City Police Department alerted citizens on Sunday to be on the lookout for rogue brick stashes, warning they were lurking all over the city to be “used during a riot.”

We have learned of & discovered stashes of bricks and rocks in & around the Plaza and Westport to be used during a riot. If you see anything like this, you can text 911 and let us know so we can remove them. This keeps everyone safe and allows your voice to continue to be heard.

New York City had its own mysterious brick eruptions in the East Village neighborhood on Saturday night, a vanishingly rare event in a city under constant construction in which unattended building materials tend to vanish in seconds.

"Yo, we got bricks. We got bricks!"—#Rioters in Manhattan chanced upon a cache in the street equipped with bricks and a shovel at 10:01 p.m. on Second Ave between St. Marks Pl. and Seventh St. pic.twitter.com/dYB7vHdYqL

Other images appeared to show police vehicles maneuvering the bricks into place.

The building this guy is standing next to is the Earl Cabell Federal Building in downtown Dallas. There are surveillance cameras all over the place and there is zero chance they can't see who dropped of the bricks and when. pic.twitter.com/38jjbgDLym

Certainly, the sudden appearance of heavy piles of masonry takes logistics most protesters are incapable of organizing on the fly. It would seem to be a simple matter for cities – especially in places like New York where every inch of space is watched over by surveillance cameras – to catch the brick bandits in the act. Of course, leaving piles of bricks around in case a riot happens to occur is hardly a crime… yet.