Posters being placed on poles in a wealthy suburb of Dallas, TX tell locals they must donate to the Black Lives Matter (BLM) movement or suffer continued LOOTING of stores!   Flat-out EXTORTION!

These posters were reported put up around the wealthy Dallas area neighborhood of Highland Village in Denton County in recent days, and threaten residents with looting if they don’t support the Black Lives Matter movement. Highland Village police said they are aware of the flyers.  Here’s what they look like: 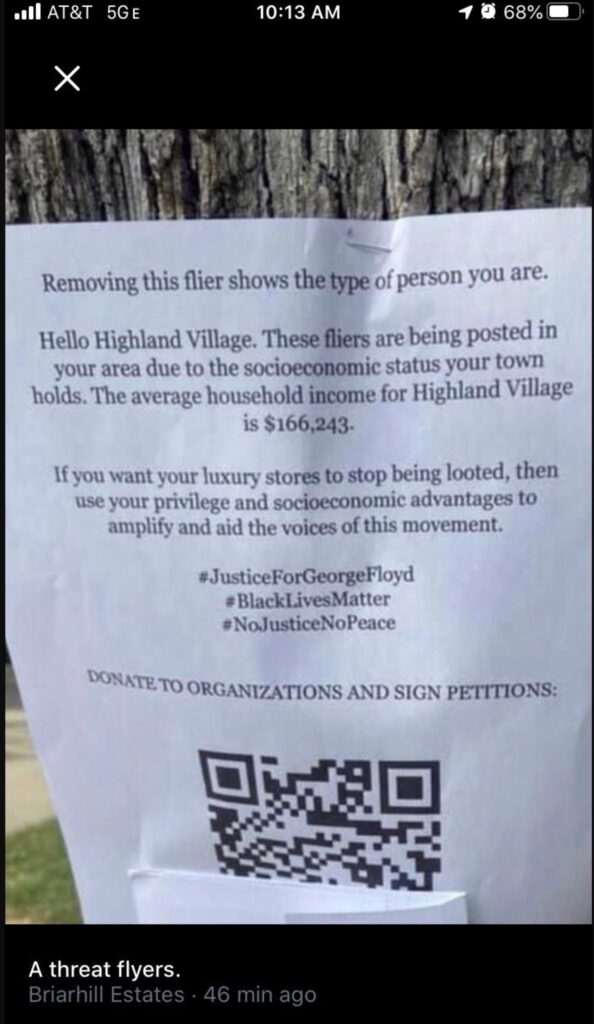 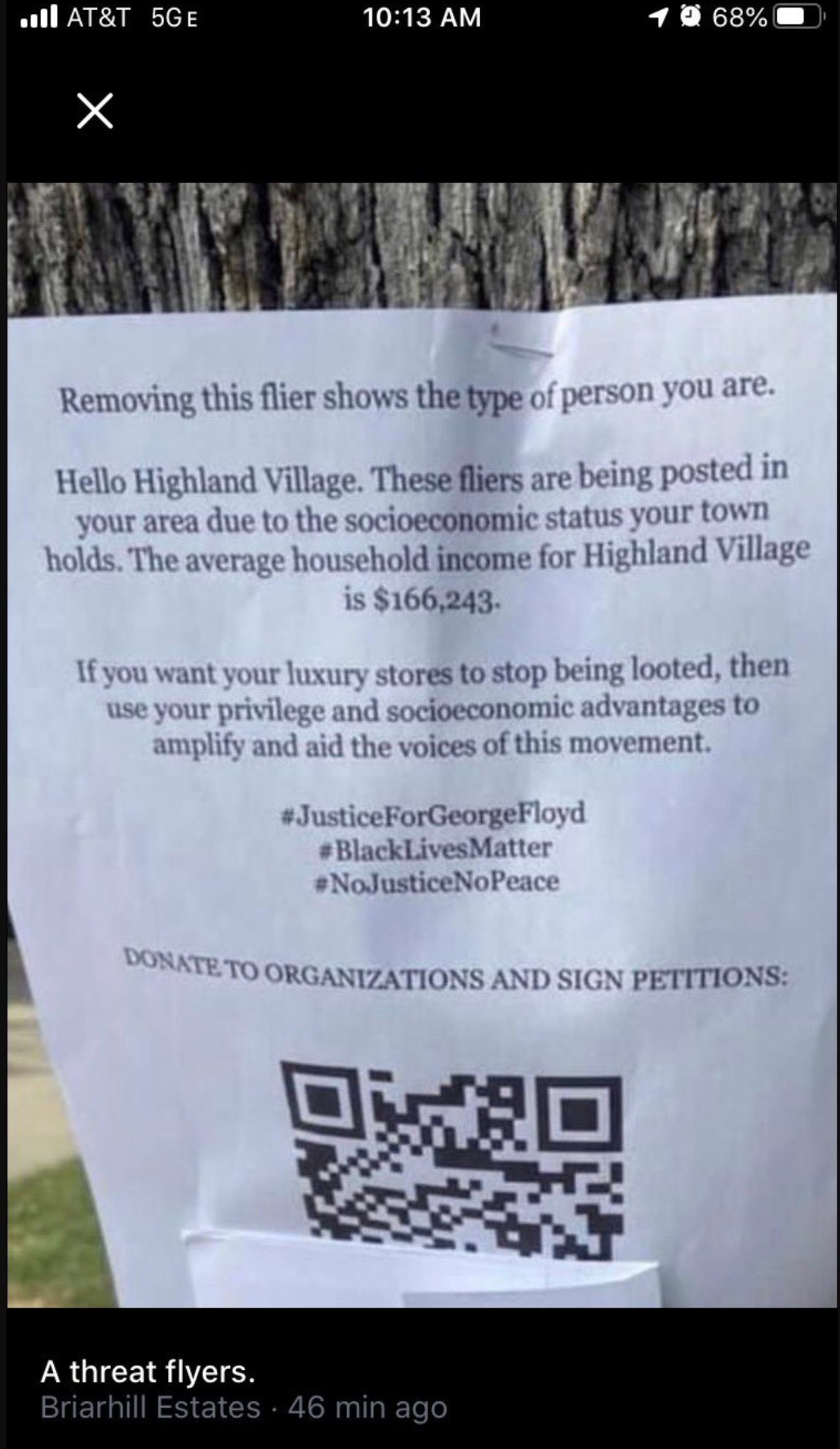 The Cross Timber Gazette reported on the flyers (excerpt):

…Some residents in the area doubt the flyers’ legitimacy. Highland Village and Flower Mound police said they are working Tuesday to determine who distributed the flyers and if the threat is serious.

The flyers were posted Monday night and/or Tuesday morning in southern Denton County, and they say that the area was specifically targeted because of “the socioeconomic status your town holds.” The looting threat follows…

…Highland Village Police Chief Doug Reim said Tuesday morning that he didn’t know who posted the flyers. He said the QR code on the flyers takes you to a webpage that is “similar” to Black Lives Matter, but isn’t verified. The flyers don’t claim to be from BLM, but they do have a #BlackLivesMatter hashtag. Some believe the threats are fake, and are meant to make protestors look bad…

The text of the flyer reads:

Removing this flier shows the type of person you are.

Hello Highland Village. These fliers are being posted in your area due to the socioeconomic status your town holds. The average household income for Highland Village is $166,243.

If you want your luxury stores to stop being looted, then use your privilege and socioeconomic advantages to amplify and aid the voices of this movement.

Highland Village Police posted a statement Tuesday about a planned protest that mentioned the flyers.

We are also aware of the flyers that have been posted throughout the area. The organizer of the rally has said the flyers are not the work of his organization. HVPD and The Shops at Highland Village management are working with the organizer of the event to allow the peaceful rally. Violence or destructive behavior will not be tolerated.

We have had requests to conduct a separate rally in close proximity to the one scheduled to show support of the HVPD. We appreciate the community recognition that our department condemns the actions that led to the death of George Floyd as we continue our prayers for the Floyd family and our nation. As a City, we will continue to support peaceful rallies and as such recommend that they do not organize to compete against each other.

The Highland Village Police Department has used body cameras since 2009. Our officers are committed to community policing with an active involvement with our citizens in our neighborhoods and businesses. 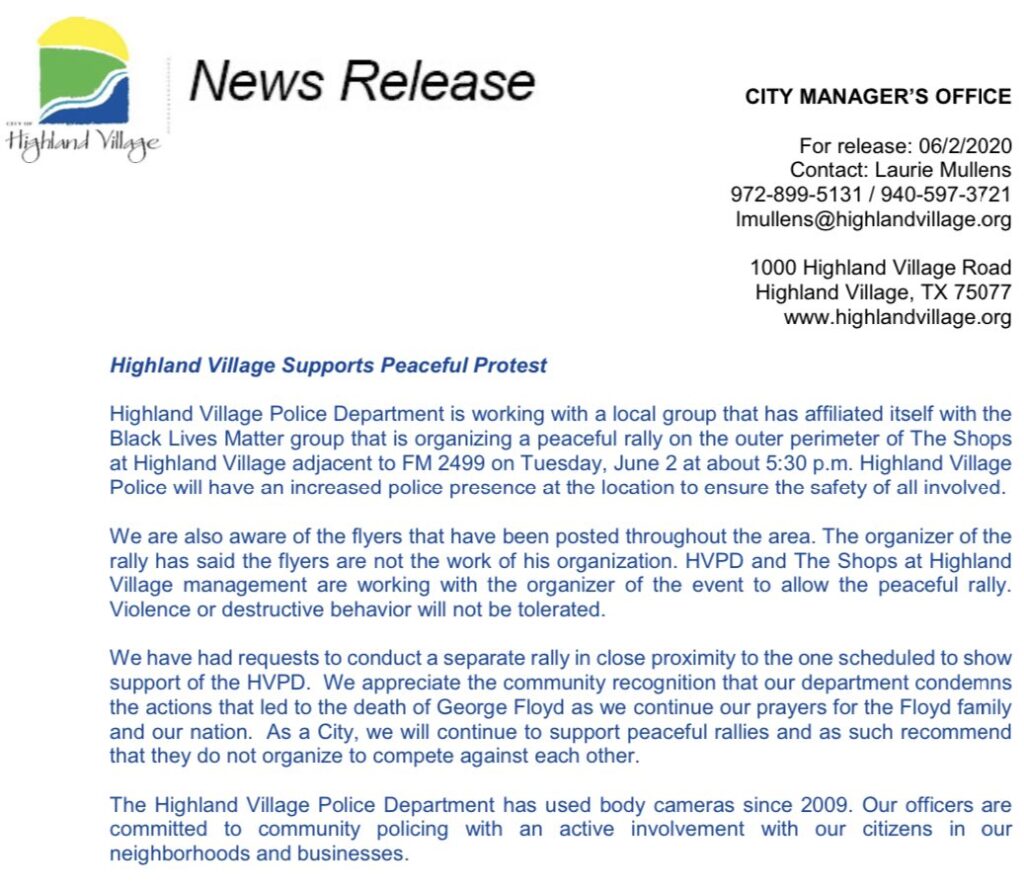 For what it’s worth, BLM should get NOTHING; except maybe a really big INVOICE for all the damage done by its members and supporters.   Folks should OFFER a multi-million dollar CASH payment to BLMN, and when they come to pick it up, hand them a Civil Lawsuit for tens of millions in damage costs.  Then have local police or the FBI arrest them for extortion.

Did I say FBI?   Oooops, they’re still too busy pushing their phony “Russia Collusion” fraud from their former Director, against our President.  The FBI may not actually be available for real law enforcement work against real crimes.   Sorry.