Here’s how the Cultural Marxists are using disaster capitalism to rebuild MPLS at the expense of the taxpayers.

Protesters were allowed to destroy a Minneapolis police building 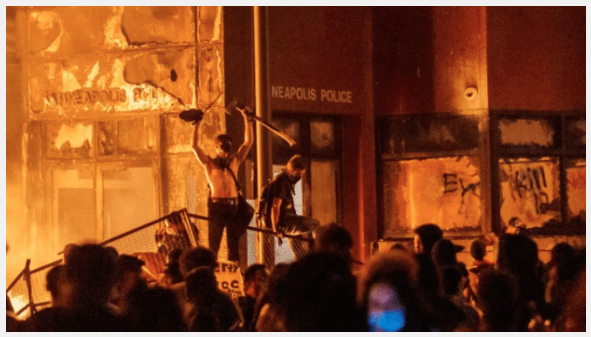 The delayed action of Minnesota leaders to quell growing unrest in the shadow of George Floyd’s tragic death resulted in mass rioting across the Minneapolis-St. Paul area.

According to the Minneapolis Star Tribune, more than 200 buildings across the Minneapolis-area have been destroyed or damaged in the riots, which will require at least $55 million in repairs. However, that number will likely be much higher — up into the “hundreds of millions,” Minneapolis Mayor Jacob Frey, a Democrat, said this week.

“We will do everything we can as we shift to recovery mode,” Frey said. “We’re recovering from crises sandwiched on top of each other, from COVID-19 to the police killing and then the looting which took place afterward.”

The delayed response of city and state leaders to the growing unrest also contributed to out-of-hand violence, destruction, and endless looting.

Despite the impending request, FEMA is not likely to help the area.

From the Star Tribune:

After the 2015 riots in Baltimore following the death of Freddie Gray in police custody, Maryland Gov. Larry Hogan repeatedly sought about $19 million in aid from FEMA for public agencies that responded to the unrest. At the time, Hogan pointed to federal assistance provided to Los Angeles following the 1992 unrest over the beating of Rodney King. FEMA denied Hogan’s request.

[Rep. Betty] McCollum expressed doubt about Minneapolis and St. Paul’s chances of getting federal disaster funding, a decision that is up to President Donald Trump. Alternatively, the state could seek funding through Congress’ annual appropriations, but that would require the Democratic-led House, Republican-led Senate and Trump to sign on.

“If it is demonstrated outside provocateurs committed acts of destruction then there is a clear rationale for an emergency declaration by President Trump,” she told the Star Tribune.