Vatican Archbishop to Trump: ‘Children of Darkness’ Oppose You 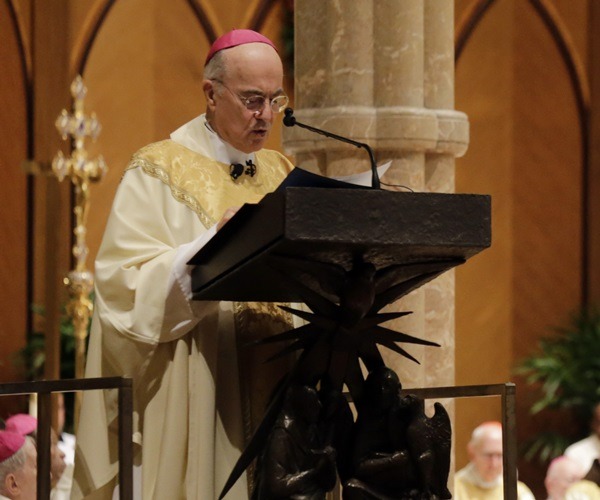 Influential Vatican Archbishop Carlo Maria Viganò, the former Papal Nuncio to Washington, D.C., has written to President Trump, praising his leadership during a critical juncture in his presidency as he faces harsh criticism for his handling of the coronavirus and the George Floyd protests.

In a June 7 letter addressed to President Trump and obtained by Newsmax, Vignano writes that the President’s enemy is “the children of darkness – whom we may easily identify with the deep state which you wisely oppose and which is fiercely waging war against you in these days . . .”

The Archbishop indicated that the “Covid emergency” will likely be viewed in the future as a “colossal operation of social engineering.”

“We will also discover that the riots in these days were provoked by those who, seeing that the virus is inevitably fading and that the social alarm of the pandemic is waning, necessarily have had to provoke civil disturbances, because they would be followed by repression which, although legitimate, could be condemned as an unjustified aggression against the population,” Vignano wrote.

The Archbishop claimed that “the same thing is also happening in Europe, in perfect synchrony.”

Vignano praised Trump as a “President who courageously defends the right to life, who is not ashamed to denounce the persecution of Christians throughout the world, who speaks of Jesus Christ and the right of citizens to freedom of worship.”

In a statement Gregory stated: “I find it baffling and reprehensible that any Catholic facility would allow itself to be so egregiously misused and manipulated in a fashion that violates our religious principles, which call us to defend the rights of all people even those with whom we might disagree.”

The President’s visit to the Shrine came shortly after he signed an Executive Order at the White House supporting religious freedom around the world. The day before the President had visited St. John Church and held a Bible up in front of a press gaggle. On Sunday night, protesters attempted to burn the historic church down.

In his letter Vignano told Trump that the attacks were “part of the orchestrated media narrative which seeks not to fight racism and bring social order, but to aggravate dispositions; not to bring justice, but to legitimize violence and crime; not to serve the truth, but to favor one political faction.”

Without referencing Gregory by name, Vignano implied he was “aligned on the opposing side” to the President.

“They are subservient to the deep state, to globalism, to aligned thought, to the New World Order which they invoke ever more frequently in the name of a universal brotherhood which has nothing Christian about it, but which evokes the Masonic ideals of those want to dominate the world by driving God out of the courts, out of schools, out of families, and perhaps even out of churches,” Vignano said.

Vignano concluded his letter, “United against the Invisible Enemy of all humanity, I bless you and the First Lady, the beloved American nation, and all men and women of good will.”