#CancelYale: University Founder Called Out for Being a Racist Slave Trader in East India Company 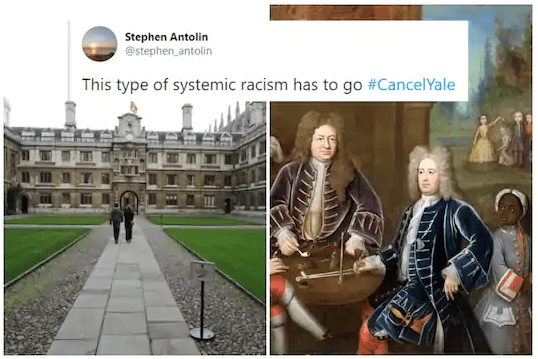 In the wake of the death of 46-year-old African-American George Floyd, several historical figures across the US and Europe who were hitherto revered in history have been called out for who they really were – racist enslavers and slave traders. And now, it seems even institutions carrying the names of racist persona will not be tolerated.

The latest big name to be contested is that of Yale University founder Elihu Yale who has not only been revealed to be a slave owner but also a slave trader, despite the Britannica Encyclopedia terming his as a “philanthropist”.

In wake of the debate, the #CancelYale hashtag movement has been growing in strength on social media with over 50,000 tweets on the microblogging site Twitter by Saturday evening.

The Boston-born Yale was the President of the East India Company’s Madras (present-day Chennai) settlement in St George, India. An American-born British merchant, Yale has been accused of racism and slavery in India, most famously by two of his paintings that used to hang inside Yale University – both featuring its founder prosperous founder Yale along with a brown boy, seemingly an Indian slave, wearing a collar like an animal.

While historians remain mixed about his slave trading links, historical evidence suggests that Yale not only practices in and benefitted from the practice of buying and selling slaves but also mandated that European ships carry back at least ten slaves on board while returning from colonies like India. Wales-based ITV News reported.

With the debate on Yale, Twitter and other social media platforms were filled with criticism for both the Boston-born Elihu Yale as well as institutions that refused to identify racist leaders as who they really were.

Author Ann Coulter, known for her right-wing views, also took to Twitter and wrote, “202 years of celebrating a racist, genocidal slave trader is enough. YALE. MUST. CHANGE. ITS. NAME”. Several others including TV presenter Jesse Kelly,

Yale University was named for Elihu Yale. Not just a man who had slaves. An actual slave trader. I call on @Yale to change it’s name immediately and strip the name of Yale from every building, piece of paper, and merchandise. Otherwise, they hate black people. #CancelYale

ATTENTION: The @Yale Center for British Art is currently displaying this painting of Elihu Yale, prominent slave trader. Yale hates black people and thinks they should be traded as commodities. #CancelYale pic.twitter.com/sYa2AvvI0u

202 years of celebrating a racist, genocidal slave trader is enough. YALE. MUST. CHANGE. ITS. NAME. #CancelYale

ATTENTION: The @Yale Center for British Art is currently displaying this painting of Elihu Yale, prominent slave trader. Yale hates black people and thinks they should be traded as commodities. #CancelYale pic.twitter.com/sYa2AvvI0u

Yale's entire campus is a monument to slavery. #CancelYale

For those calling #CancelYale a troll

How do you *not* rename a university named after a slave trader, Elihu Yale?

This type of systemic racism has to go #CancelYale

Not the first time

Calls for “Cancel Yale” started doing the rounds last week following a petition in Wales, UK, to change the name of a pub in Wrexham called the “The Elihu Yale” pub.

This, however, is not the first time that Yale University has had to change names due to racism. In 2017, Yale changed the name of its Calhoun College – named after former US Vice President and Yale graduate John C Calhoun after protesters said the Ivy League school should drop the honor it gave to an alumnus who was a prominent advocate of U.S. slavery.

The call for renaming institutions came following the custodial police killing of George Floyd in the American town of Minneapolis in Minnesota in May that sparked a chain of protests across the US. As anti-racism and Black Lives Matter protests spread across the world, protesters took to toppling or defacing busts and statues of historical persons such as Edward Colston who were respected despite their racist and white-supremacist past.