‘THE BARBARIANS HAVE COME BACK’ 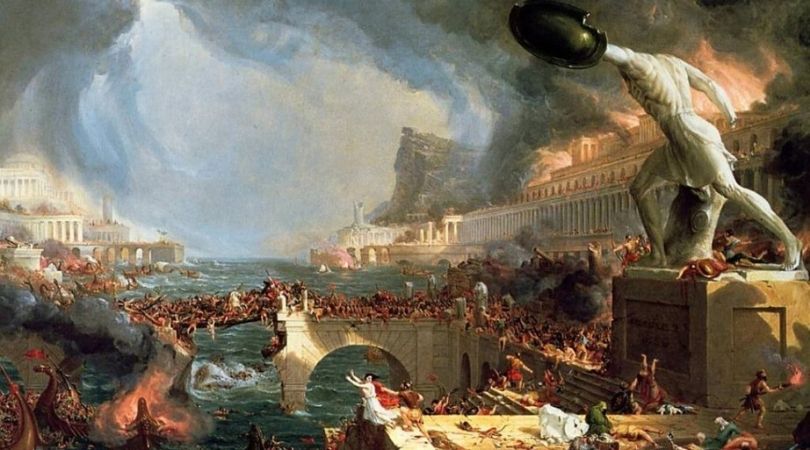 MADRID, Spain (ChurchMilitant.com) – A Spanish prelate is warning that the vandalism of saints’ statues in the United States signifies a resurgence of barbarism.

Spanish bishop Juan Antonio Reig Pla said of the vandalism of saints’ statues in the United States, “Dear friends, that they should remove the image of Isabel of Spain and tear down the statue of Fr. Junípero Serra means that the barbarians have come back.”

“We cannot simply attribute this to ignorance — it is possible that those who did these things are ignorant — but behind these ignoramuses are real barbarians who want to finish off Christian civilization,” said the bishop on Sunday. He said that it is Jesus Christ “who reveals to human beings their mystery,” and added that assaults on Christian history are “the worst thing[s] that can happen to us.”

Bishop Reig Pla warned that “we are living during a profound crisis of truth,” which he said is a “crisis of an intelligence that does not seek the truth.” He observed that this leads to a “perversion of freedom” for people, who then do not know which path to follow.

The bishop told his flock that protesters are “exalting the individual to affirm a radical autonomy to define even his body and break with all ties granted by tradition — starting with marriage, family, Catholic Tradition and love of the land and love of country. All of this is in profound crisis.” He said that a “prophetic voice” is needed to respond to the crisis of truth, warning that “with the perversion of freedom comes something worse — the darkening of the moral conscience.”

Dear friends, that they should remove the image of Isabel of Spain and tear down the statue of Fr. Junípero Serra means that the barbarians have come back.Tweet

Spanish authorities are investigating the bishop for supposedly violating hate-crime laws that prohibit conversion therapy for persons seeking to avoid same-sex attraction. Spain’s socialist government has embraced doctrines of the new Left, which include further reducing protections for unborn human life and redefining sex, marriage and parental authority. Bishop Reig Pla has been one of the sternest critics of Spanish socialists and has been under fire for preaching Church doctrine about marriage and sexuality.

A Saint Under Siege

On June 19, a mob of black-clad vandals in San Francisco hauled down a statue of St. Junípero Serra, a 1700s Spanish friar who built mission churches and defended native Californians from persecution and mistreatment at the hands of Spanish colonists. In 2015, he became the first saint canonized on American soil. During a visit to Washington D.C., Pope Francis said, “Fr. Serra had a motto which inspired his life and work — not just a saying — but above all a reality which shaped the way he lived: Siempre adelante! Keep moving forward!” Rather than looking to the past, the pope said, the saint “kept moving forward, because the Lord was waiting. He kept going, because his brothers and sisters were waiting. He kept going forward to the end of his life.”

Activists pulled down the 30-foot statue of the saint holding a cross on high at San Francisco’s Golden Gate Park last week. Once it was on the ground, the vandals poured red paint on it and daubed the phrases “stolen land,” “decolonize,” and “Ohlone land” on its pedestal. Parishioners of Our Lady Star of the Sea of San Francisco later went to the site to pray on their knees for reparation.

On the following day, a mob chanted “Take it Down!” and “This is for our ancestors!” while toppling another statue of the saint in Los Angeles. It was erected in 1932 by the Knights of Columbus.

Protests against excessive use of force by police have devolved into weeks of violence, arson and rampages by leftists calling for the defunding of police, elimination of the judicial system, compensation for slavery and the furthering of the LGBTQ agenda. Numerous Catholic parishes have reported vandalism. Our Lady of Guadalupe parish in Flagstaff, Arizona reported that a crucifix at the church was vandalized, while monuments to American Indian veterans were also attacked.

The Democrat-dominated California legislature announced last week that a statue of Christopher Columbus and Queen Isabel of Spain will be removed from the state capitol, where it has stood for more than a century. According to a statement by California Senate president Toni Atkins, Assembly Speaker Anthony Rendon and Assembly Rules Committee Chair Ken Cooley — all Democrats — “Christopher Columbus is a deeply polarizing historical figure given the deadly impact his arrival in this hemisphere had on indigenous populations. The continued presence of this statue in California’s Capitol … is completely out of place today.”

What is happening to our society?Tweet

Queen Isabel, who funded Columbus’ voyage, was dubbed “Catholic Monarch” by Pope Alexander VII in 1494 and was granted the title, “Servant of God” by the Vatican in 1974. Credited for unifying fractious Spain in the 1400s, Isabel has been criticized for her role in the colonization of the Americas. Critics of St. Junípero Serra have likewise denounced him for instances of what they describe as “enslavement” and “cruelty.”

In a statement, Abp. Salvatore Cordileone of San Francisco asked, “What is happening to our society? A renewed national movement to heal memories and correct the injustices of racism and police brutality in our country has been hijacked by some into a movement of violence, looting and vandalism.” Affirming that the “memorialization of historic figures merits an honest and fair discussion,” the archbishop said that in this case, “It was mob rule, a troubling phenomenon that seems to be repeating itself throughout the country.”

The California Catholic bishops also released a statement that quoted Cordileone. They declared, “The movement to confront racism within our society during these past weeks has been, at times, challenging, but it has provided bold new hope for every American that our nation can begin to transform key elements of our racist past and present.” They added that they “vigorously and wholeheartedly support a broad national coalition” to peacefully eliminate “racism against members of the African-American and Native-American communities.” It went on to defend St. Junípero‘s record, saying that if his memorials are to be defaced, “then virtually every historical figure from our nation’s past will have to be removed for their failings measured in the light of today’s standards.”

But Do They Really Care?

An article at the Spanish InfoVaticana website opined, “California’s bishops don’t care about Junípero Serra,” and that their statement failed to identify the “movement” that has caused 25 violent deaths in recent weeks in response to the death of George Floyd at the hands of Minneapolis police officer (who is now charged with murder). The article noted that Catholic bishops in the U.S. have taken millions of dollars in grants for resettling illegal immigrants, participating in Black Lives Matter movement (BLM) protests and even traveling to the U.S. border with Mexico to denounce the Trump administration security policy.

The bishops aren’t police officers or politicians or community organizers.Tweet

Auxiliary Bp. Robert Barron of Los Angeles, a media figure well-known for his documentaries, approvingly tweeted a copy of the California bishops‘ statement. When criticized, Bp. Barron was quick to respond on Twitter. One of the criticisms read: “Great, another letter. What action are you going to do? It’s time to go into the streets to talk in person with Antifa and BLM. You also need to get men out and stand guard around any other valuable statues.” The bishop responded, “That’s the laity’s job! You are meant to sanctify the public space. The bishops aren’t police officers or politicians or community organizers. Vatican II taught that the secular arena belongs to the laity.” He followed up with a column that reiterated and expanded his position that resolving racism is the job of laypeople.

InfoVaticana observed of Barron and the other American prelates, “Racism exists just as do greed, lust and other evils. But to assert that it is ‘systemic’ in the United States and a problem to be urgently resolved, we would take as a joke if we did not know that it is merely cowardice stemming the Catholic hierarchy’s alacrity to bend to worldly ideological trends rather than making waves.”