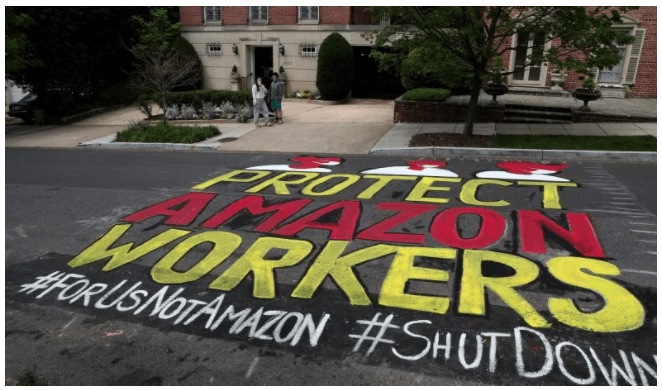 A message painted by activists on the street outside of one of the personal residences of Amazon founder Jeff Bezos in Washington, D.C., April 29, 2020 (Leah Millis/Reuters)

Videos on Twitter showed a guillotine set up alongside a sign reading, “Support our poor communities, not our wealthy men.” The guillotine was widely used during the French Revolution to carry out executions and has been co-opted by the modern-day anti-capitalist movement, with some Bezos detractors sporting earrings depicting his decapitation via guillotine.

Another video featured a protestor shouting, “When they become threatened, and we have no voice, the knives come out.”

Bezos is the world’s wealthiest person with an estimated net worth of over $100 billion. His mansion, a 27,000 square foot property housed in the former Textile Museum building, is worth $23 million and is the largest in the city.

The flier for the event, marketed as a “March on Jeff Bezos’ House,” took issue with former employee Chris Smalls’ being “fired and racially slandered.”

An Amazon spokesperson told Fox Business in April that said Smalls, who had organized a New York strike over workplace conditions during the coronavirus pandemic, was terminated for “violating social distancing guidelines and putting the safety of others at risk.” Smalls had shown up on-site for a walkout after coming in contact with a coworker who had tested positive for coronavirus the week prior, the spokesperson said.

The flier also called for the abolition of police, prisons and Amazon, saying, “Amazon works directly with the police to surveil us, stoking racist fears in the name of profit.”